Facebook Twitter Copy URL
Copied
Rallies will push through and there will still be anti-Marcos chants, says Bayan's Renato Reyes as 'this is no time to allow State to clamp down on free speech' 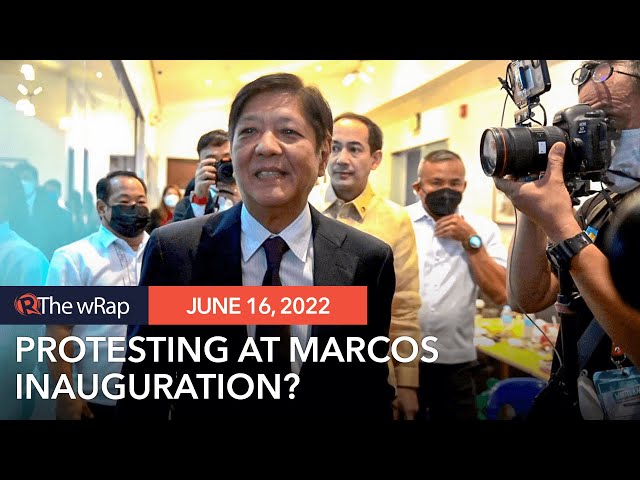 MANILA, Philippines – Threat hangs over groups who would stage anti-Marcos protests on June 30 for the inauguration of incoming President Ferdinand “Bongbong” Marcos Jr. at the National Museum.

It started with a statement last week from police acting chief Lieutenant General Vicente Danao Jr. that only Marcos supporters will be allowed to stage mobilizations near the National Museum. For the anti-Marcos groups, Danao said “baka masira naman po ’yung ating inauguration (it may ruin our inauguration.)”

On Wednesday, June 15, Justice Secretary Menardo Guevarra said rallies can be held during the inauguration “as long as their statements do not constitute an actionable offense, such as inciting to sedition or oral defamation.”

Guevarra added: “The right of peaceful assembly, regardless of one’s political beliefs or affiliation, is guaranteed by the constitution, subject to reasonable regulations to maintain peace and order, including the requirement to obtain a prior permit.”

Guevarra’s statement that defamation is an actionable offense fueled concern that anti-Marcos rallyists will be apprehended, since the usual chants against the family include calling them thieves, as reference to the stolen wealth acquired by the Marcoses in the dictator’s more than 20 years in power. President-elect Marcos is the executor of the dictator’s estate, and as such, he is directly liable for the unpaid estate tax.

Criminal law professor Ted Te said statements or chants perceived to be defamation cannot stop a rally because Supreme Court jurisprudence dictates that content of a protest can only be regulated if it poses clear and present danger. Clear and present danger include calling for violence, or threatening to detonate a bomb.

“[You can only regulate] time, place, and manner,” said Te, a former spokesperson of the Supreme Court.

Te added the law on rallies is BP 880, and the said legislation “interprets that every public plaza is a freedom park unless the LGU has designated a freedom park, so there is no permit required.”

“Only leaders are liable, and not the participants,” said Te.

Will they still chant that Marcos is a thief?

“Chants have been there ever since. We see no reason to temper. Now is not the time to allow the State to clamp down of free speech. The times demand the full exercise of free speech and to aggressively counter disinformation,” said Reyes.

Reyes said that while he has had experience being in a protest dispersed at the National Museum, “as long as the activity is peaceful for example on a sidewalk across the street, I do not see any reason they should prohibit us.”

“The Philippine National Police should really just study the law instead of trying to police the way people should think and speak. It is such a throwback to Martial Law,” said Reyes.

An option would be to hold the rally at the nearby Liwasang Bonifacio, which Reyes said “is a freedom park and does not require permit.”

The Commission on Human Rights (CHR) said in a statement Wednesday it “reminds our government leaders and authorities that criticism or dissent is part of a vibrant and functioning democracy.” – Rappler.com