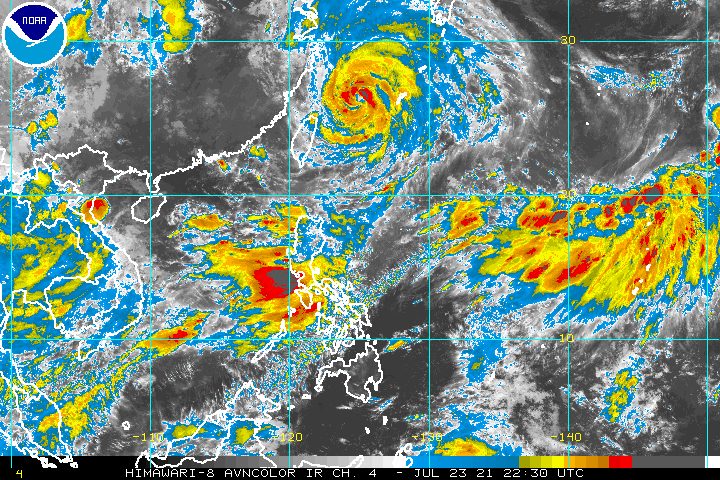 Typhoon Fabian (In-fa) continued to enhance the southwest monsoon or hanging habagat on Saturday, July 24, even after it left the Philippine Area of Responsibility (PAR) at 11 pm on Friday, July 23.

The Philippine Atmospheric, Geophysical, and Astronomical Services Administration (PAGASA) said in its 5 am bulletin on Saturday that Fabian was already 640 kilometers north northeast of Itbayat, Batanes, moving north at 15 kilometers per hour (km/h).

The typhoon made its exit over a week after it formed inside PAR on the morning of July 16.

Following its exit, Signal No. 1 was lifted for Batanes. The province, as well as Babuyan Islands, had seen strong winds due to Fabian despite the typhoon not making landfall in the Philippines.

PAGASA said Luzon and the Visayas will have occasionally gusty conditions on Saturday due to the enhanced southwest monsoon.

Scattered to widespread monsoon rain will also persist in these areas on Saturday:

The enhanced southwest monsoon and even Fabian continue to have an impact on coastal waters as well.

Travel in the seaboards of Luzon as well as the western and central seaboards of the Visayas will stay risky for small vessels on Saturday, amid rough to very rough seas.

The remaining seaboards of the country have moderate to rough seas. PAGASA advised small vessels to take precautionary measures.

PAGASA said Fabian will gradually speed up while moving northwest over the East China Sea.

The typhoon could make landfall in the eastern part of China on Sunday afternoon or evening, July 25.

It may start to weaken on Sunday as it nears China, but PAGASA said there is an “increasing possibility” that this could happen as early as Saturday.

Once the typhoon hits China, it is projected to rapidly weaken, and may just be a remnant low by Tuesday evening, July 27.

Fabian was the Philippines’ sixth tropical cyclone for 2021 and the second for July.

Aside from Fabian, PAGASA is keeping an eye on Tropical Storm Nepartak, located outside PAR.

It has maximum sustained winds of 65 km/h and gustiness of up to 90 km/h.

So far, PAGASA does not expect Nepartak to enter PAR, but it will be monitored in the coming days.