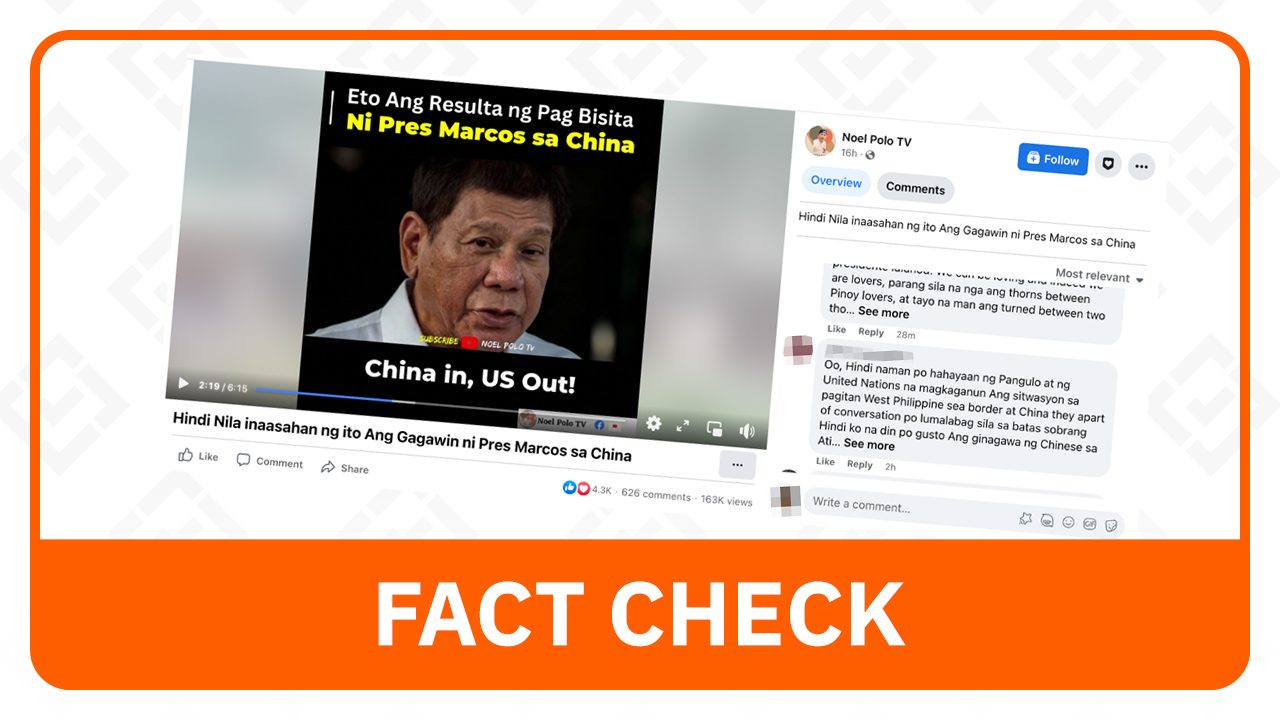 Facebook Twitter Copy URL
Copied
The Philippines filed a case against China on January 22, 2013, under the administration of former president Benigno Aquino III.

Claim: The Philippines sought an arbitral ruling on territorial disputes in the South China Sea against China in 2016.

(“…And in 2016, Manila approached the United Nation (sic) to obtain an arbitral ruling for Beijing’s claim in the South China Sea.”)

The false claim was said while a photo of former president Rodrigo Duterte was shown to make the historic move appear to have been made under the Duterte administration.

Why we fact-checked this: The video making the obviously false claim has garnered over 4,300 reactions, 626 comments, and 163,000 views.

The 501-page arbitration award made by the Permanent Court of Arbitration (PCA) concluded that “there was no legal basis for China to claim historic rights to resources within the sea areas falling within the ‘nine-dash line’.” Its basis is the 1982 United Nations Convention on the Law of the Sea (UNCLOS). Touting the Hague ruling as Duterte’s win blatantly disregards how the Duterte administration continuously downplayed this victory during his 6-year tenure.

Flip-flop: Duterte had made conflicting statements regarding the territorial dispute in the South China Sea. On July 27, 2016, Duterte thanked Aquino for filing and winning the case against China, only for him to falsely claim in 2018 that Aquino did nothing to enforce the same ruling that had only taken effect after Aquino left office.

Despite calling the ruling an ace card in 2016, Duterte softened his initial hardline stance to defend the sovereign rights of the Philippines in the disputed seas, opting to prioritize diplomatic ties with China. In 2021, Duterte belittled the Hague ruling, claiming that it was just a piece of paper that can be thrown out. – Pola Regalario/Rappler.com
Keep us aware of suspicious Facebook pages, groups, accounts, websites, articles, or photos in your network by contacting us at factcheck@rappler.com. You may also report dubious claims to #FactsFirstPH tipline by messaging Rappler on Facebook or Newsbreak via Twitter direct message. You may also report through our Viber fact check chatbot. Let us battle disinformation one Fact Check at a time.