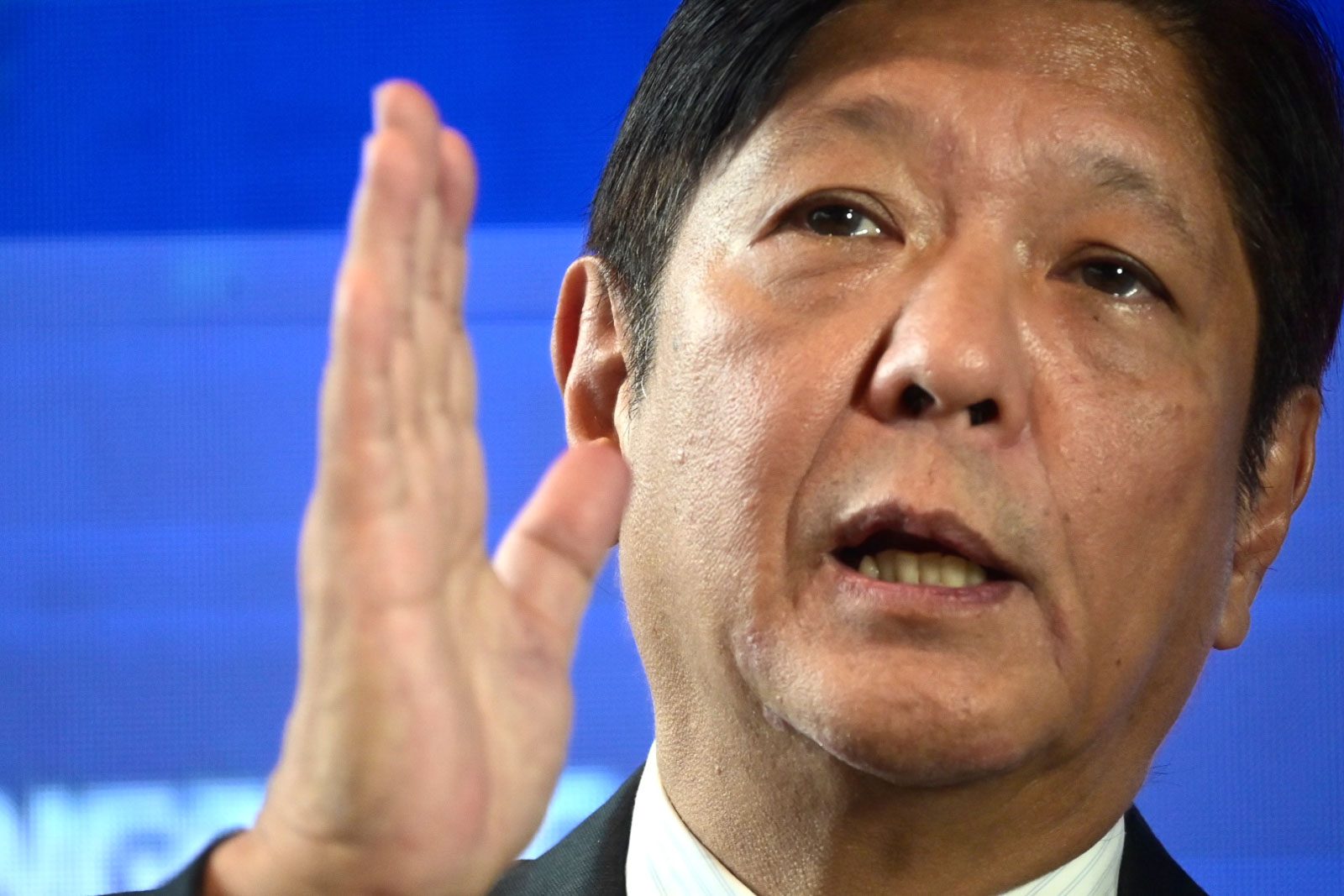 SOON IN POWER. Presumptive president Ferdinand Marcos Jr. speaks to the media after his meeting with various diplomats in Mandaluyong City on May 23, 2022. Rappler

SINGAPORE – Where a post-Duterte Philippines will place itself within the US-China rivalry in Asia is the subject of much curiosity among diplomats and analysts watching Southeast Asia.

At the 2022 Shangri-La Dialogue held from June 10 to 12 in Singapore, Filipino delegates were asked on various occasions about Ferdinand Marcos Jr.’s security and foreign policy.

Captain Dianne Despi, an instructor with the Philippine military’s Corps of Professors and a summit delegate, was asked during a session of the Southeast Asian Young Leaders Program, about what kind of policy Marcos would carry out, especially concerning the South China Sea.

This writer, also a delegate at the summit, had been asked by analysts, diplomats, and military officers, mostly from Southeast Asian countries, about Marcos too.

The curiosity, according to Malaysian foreign policy analyst Thomas Daniel of the Institute of Strategic and International Studies, partly comes from expectations of change from the highly mercurial President Rodrigo Duterte.

“We went from one extreme, from [Benigno] Aquino [III] to Duterte, and for me it is one extreme to another and I wonder what Bongbong’s position will be,” Daniel told Rappler.

It was the late Benigno “Noynoy” Aquino III’s administration that took China to court for its island-building in the West Philippine Sea, within the Philippines’ exclusive economic zone. The 2016 legal victory came during Duterte’s time but Duterte decided then to “set aside” the ruling for the meantime and focus on warming up relations with Beijing.

There was a perception from analysts Rappler spoke with that Marcos could be a welcome change to Duterte.

“Certainly less dramatic to say the least. Rhetorically, he seems to be less all over the place so that’s a good thing,” said Dr. Evan Laksmana, an Indonesian analyst with the Lee Kuan Yew School of Public Policy.

It appeared to Daniel that Duterte’s rhetoric – including his announcement of his “military and economic separation” from the United States and his statements about the South China Sea being “already in possession” of China – “was not matched in kind” by the career officials of the foreign affairs department and defense department.

“You listen to what he (Duterte) has to say, but if you look at actual policies on the ground, it is slightly different. I wonder how the Filipino foreign service and defense service will respond to Bongbong,” said Daniel.

Of course, analysts, like most foreigners, are aware of the Marcos baggage – the dictatorship of his father, the ill-gotten wealth, his mother’s vaunted shoe collection. In Indonesia, also set to hold elections in 2024, there is interest in how Marcos supporters used social media to sanitize his family’s history.

“There are questions about his family and his past, and certainly there are questions whether or not how he won in the elections will be adopted or appropriated by other countries like Indonesia in terms of other methods of campaigning with regards to the past and disinformation,” said Laksmana.

Of particular interest to Vietnamese, European, Australian, and Singaporean foreign affairs and security experts and officials who spoke with Rappler was who Marcos would appoint as his foreign secretary and defense secretary.

The presumptive president has been mum about his choices for these two critical Cabinet posts but had earlier announced the appointment of political scientist and commentator Clarita Carlos as his national security adviser.

“What the past two administrations have shown us is whoever holds these positions will be the ones who will handle impending international crises,” said Julio Amador III, a Filipino foreign policy expert and president of the Foundation for the National Interest. He was also a summit delegate.

“I hope before he is inaugurated the names will come out. People holding those positions will tell us the picture of the policy,” he told Rappler.

Duterte’s Defense Secretary Delfin Lorenzana, who held bilateral meetings with several of his counterparts from abroad, told Rappler “many are watching the new president for what his direction will be.”

“Marcos is still forming his Cabinet. When his Cabinet is complete, they will meet and he will tell them his policies and direction. That’s the only time other countries will know what it is,” he said.

Marcos will assume the presidency in a time of great uncertainty, heralded by Russia’s invasion of Ukraine that has put into question the effectiveness of the post-World War II rules-based order.

Because of the invasion, a blatant violation of international laws and norms, risk of nuclear war has never been as high since the Cold War and tensions are mounting among the world’s nine nuclear-armed states.

“Ukraine today may be East Asia tomorrow,” said Japanese Prime Minister Fumio Kishida in his keynote address for the summit.

The invasion only heightened apprehensions about the “no limits” strategic partnership between Russia and China last February. While Chinese Defense Minister Wei Fenghe said China did not provide material support to Russia for the invasion, China has not explicitly condemned the unprovoked attack of its ally on Ukraine. China also opposes sanctions led by the US against Russia and supports “peace talks” instead.

The US-China rivalry in Asia would be one of Marcos’ major foreign policy and security challenges.

“Navigating the power dynamics is one of them. The Philippines is a treaty ally with the US and also has very contentious issues with China in the South China Sea,” said Daniel. During the Singapore summit, the defense ministers of US, Japan, Australia, and France devoted much time to emphasizing how much of a priority the Asia-Pacific and Southeast Asia are in their security strategies. They all promised to devote more resources and defense assets to ensure freedom of navigation in the region, particularly in the South China Sea.

US Defense Secretary Lloyd Austin called the Indo-Pacific region the “center of strategic gravity” and the “heart of American grand strategy.”

On the other side of the spectrum, China Defense Minister Wei Fenghe portrayed Beijing as a benign power promoting “universal love, amity, and harmony” and seeking “win-win” cooperation with countries in the same region.

The US and its allies took turns slamming China for its “coercion” and “unilateral attempts to change the status quo by force.” China slammed the US, in turn, for its “interference in internal affairs” and “long-arm jurisdiction.”

Angered by the US visa cancellation of his former police chief who was the architect of his controversial drug war, Duterte made the ultimate foreign policy threat: scrapping the Visiting Forces Agreement with the US, a crucial deal that allows US soldiers to easily enter the Philippines and its military bases.

But COVID-19 forced Duterte to stop his hedging. Recognizing how much the Philippines needed vaccines from the US, he decided to fully restore the VFA, which had then been put on hold several times.

Analysts perceive Marcos as someone not likely to base his decisions on emotions or personal grievances. But will Marcos engage in the same hedging, just with different tactics?

Because of the dearth of interviews and debate participation during his presidential campaign, there is little that analysts and diplomats know about Marcos’ foreign policy and security leanings.

The only clarity so far is his seemingly newfound determination to uphold the 2016 Hague ruling.

Last May 26, Marcos said he would use the arbitral award “to assert our territorial rights,” a change in tune from earlier remarks when he said the ruling was “no longer available to us.”

Using stronger language than Duterte, Marcos said the country’s jurisdiction over the West Philippine Sea was not just a “claim” but a “right.”

“We will not allow a single square – make it smaller, a single square millimeter – of our maritime coastal and up to our 200-kilometer [nautical-mile] rights to be trampled upon,” said the presumptive president.

He promised to “consistently” engage with China on the issue, “with a firm voice.”

But Marcos’ ties to ASEAN go way back. The bloc was founded during the presidency of his father, the late strongman Ferdinand E. Marcos. But the ASEAN today is different from 55 years ago. ASEAN has grown in importance, due to the growth of its economies and the greater interconnectedness of the world.

ASEAN is set to become the fourth biggest economy in the world by 2030. A majority of its 700 million population are under the age of 35 and embracing technology, promising economic indicators.

But ASEAN is beset with challenges – disputes among states on overlapping maritime claims, threats to freedoms posed by the military takeovers in Myanmar and Thailand, China’s aggression in the South China Sea and other waterways, the COVID-19 pandemic, and the US-China rivalry.

The Ukraine invasion has only added to this – bringing worries of nuclear conflict and a food shortage.

A change in Philippine leadership could infuse much-needed energy to the regional grouping. Marcos, who knows how tied ASEAN is with his father’s legacy, would have motivations for strengthening the bloc.

“This is a time when there is new energy, new drive. It would be great if parts of that energy is devoted in rebuilding ASEAN,” said Laksmana.

The Philippines, especially during the Aquino presidency, had been one of the most critical ASEAN voices challenging China’s actions in the South China Sea.

“The fact that the Philippines won the arbitral ruling is itself a significant catalyst for how Southeast Asia manages the South China Sea issue in particular so the Philippines and its consistent engagement with ASEAN would be crucial,” said Laksmana.

Marcos’ father had another ASEAN-related legacy: pursuit of the Sabah claim against Malaysia. Will his son and namesake pursue the same claim more aggressively during his presidency?

A bloody corollary to the Sabah claim haunts Marcos Jr. to this day – the 1968 Jabidah Massacre, the killing of Muslim recruits by soldiers in Corregidor Island who were recruited for a top-secret mission to create havoc in Sabah for the purpose of initiating a secession movement.

Both Laksmana and Daniel, however, also worry that Marcos may be more similar to several Southeast Asian leaders in that his focus on domestic issues might lead him to function “almost on autopilot” when it comes to foreign policy.

“Domestic uncertainties, intense elite politicking, the insecurity of being in power when elites were not as secure as they once were, that detracts a lot from the amount of energy you can spend looking abroad,” said Daniel. – Rappler.com