Presidential candidate Vice President Leni Robredo pays homage to the Mangyan tribe, the indigenous peoples of Mindoro, as she joins members of the Youth for Leni in performing their traditional dance after she was introduced at the "Mindorosas: The Occidental Mindoro People's Rally" held at the San Jose Municipal Plaza in San Jose, Occidental Mindoro.

Facebook Twitter Copy URL
Copied
(1st UPDATE) A little celebratory dance was in order for presidential candidate Leni Robredo, who, along with running mate Kiko Pangilinan, also got the support of Gem-Ver fishermen and local officials

Robredo’s “Kakampink” supporters in San Jose, Occidental Mindoro turned into a frenzy when she suddenly started busting out her dance moves along with the young members of the Mangyan tribe who welcomed her onstage on Wednesday, April 6.

It has become a staple in Robredo’s rallies across provinces for traditional dance performers to accompany her as she enters the stage. Robredo usually just walks beside them and waves to the crowd.

But Robredo stepped it up a notch in Mindoro. As she faced the sea of pink in San Jose, Robredo turned to her side and began copying the traditional dance moves of the Mangyan tribe performers, who seemed delighted she can easily keep up with them.

The crowd loved it, their chants of Robredo’s name almost drowning out the “Kay Leni Tayo” song that she was dancing to. 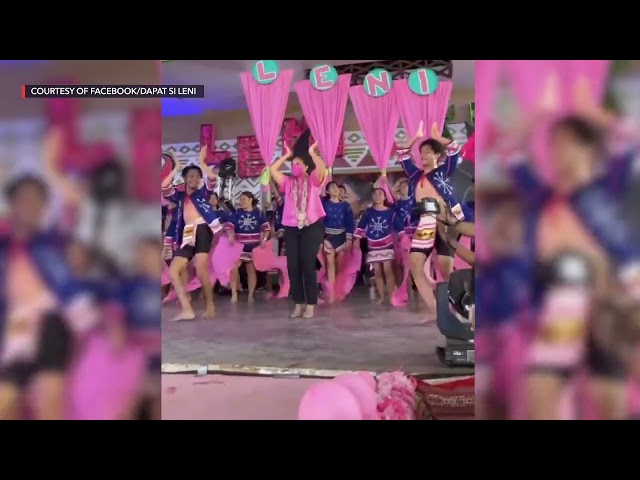 Robredo entertained her supporters on the same day Pulse Asia Research, Inc. released its latest survey, which showed her numbers surging by nine points to 24 in end-March.

Her arch rival, the late dictator’s son Ferdinand Marcos Jr., still dominates with 56%, but his four-point drop from February energized the “Kakampinks” and even Robredo herself.

The poll seems to have captured the start of a groundswell of support for Robredo these past weeks, with tens of thousands of “Kakampinks” joining her rallies even in the bailiwicks of other presidential contenders.

The Pulse Asia survey also captured the aftermath of the first Commission on Elections-sponsored debate, and the mammoth rallies that Robredo’s supporters staged for her in Cavite, Negros Occidental, Surigao and Butuan, Cagayan and Isabela, General Santos, Basilan, Zamboanga City, and Pasig, the biggest one yet with over 130,000 attendees.

No doubt Robredo still needs to do a lot of work to catch up to Marcos. But at least that Wednesday afternoon, in a municipality in Occidental Mindoro, a little celebratory dance was in order.

While in Occidental Mindoro, Robredo and running mate Senate Kiko Pangilinan got the support of Gem-Ver fisherfolk and some local officials. The tandem visited and had a dialogue with the Mindoro22, the fisherfolk from F/B Gem-Ver, which was rammed by a Chinese vessel in 2019. 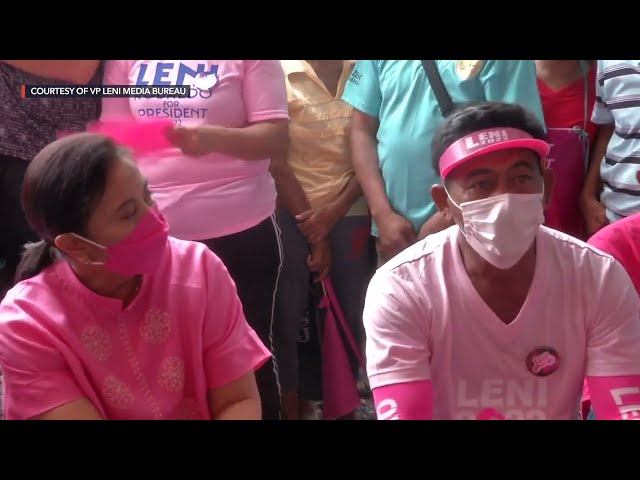 According to Robredo’s campaign team, the fisherfolk issued a manifesto of support for Robredo and Pangilinan.

After the ramming incident in 2019, Robredo immediately visited them in June and August 2019.  Each of the fisherfolk received P50,000 under Robredo’s Angat Buhay program. Two months later, Robredo gave additional financial assistance and new fishing equipment for the fisherfolk.

During her visit to Occidental Mindoro, the Vice President and her running mate also secured some endorsements from local officials. Occidental Mindoro Representative Nene Sato, who is running for governor, supported Robredo’s presidential bid.

The endorsement did not come as a surprise because the lawmaker is a Liberal Party stalwart. She served as LP secretary-general in 2015.

Occidental Mindoro, located in Mimaropa, is important for Robredo because she won there with over 200,000 votes against Ferdinand Marcos Jr. in the 2016 vice presidential race. In the March survey of Pulse Asia, Marcos Jr. is leading with a 51% voting preference in the region, compared to Robredo’s 27%. – Rappler.com