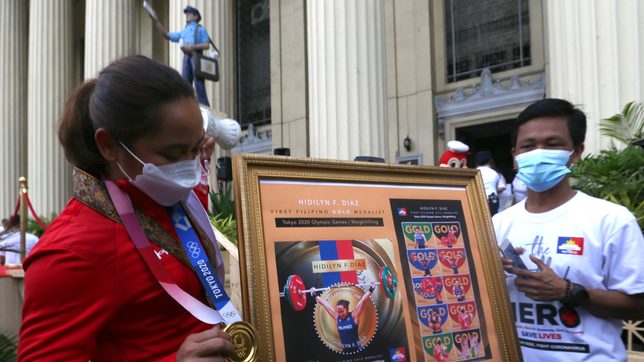 CHAMPION. Hidilyn Diaz, the Philippines' first-ever Olympic gold medalist, gets her own set of stamps.

The four Filipinos who brought home medals in the Tokyo Olympics have been immortalized as the Philippine Postal Corporation (PHLPost) honored them on commemorative stamps.

Weightlifter Hidilyn Diaz, who won the Philippines’ first-ever Olympic gold medal, got her own set of stamps featuring her best moments in Tokyo, where she set two Games records.

Diaz attended the launch of the stamps in front of the Manila Central Post Office in Liwasang Bonifacio on Saturday, September 18.

The country also netted its highest Olympic ranking in more than three decades as it shared 50th place with Slovakia. – Rappler.com