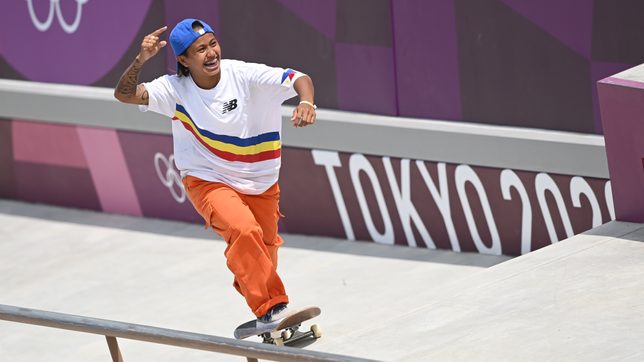 ALL FUN. Margielyn Didal lightens up the Olympic action.

After an inspiring Tokyo Olympics debut, Cebuana star skateboarder Margielyn Didal hopes that Filipinos’ interest in the sport will only grow further from here on out.

“I hope you all liked the spread of good vibes in the Olympics, and I hope they saw, especially here in the Philippines, that we really have a big chance [to medal] in the Olympics,” said Didal.

“For me, as a skateboarder for 9 or 10 years already, [the skate scene] is really getting bigger, and will only grow even bigger with the inclusion in the Olympics,” she added in a recent media roundtable hosted by Red Bull.

Didal graced international news despite not medalling in her Olympic debut after a stellar display of sportsmanship and positivity towards her competitors, and the event overall.

Her antics, highlighted by a hilarious meet-up with all-time great Tony Hawk, quickly went viral on social media, and persisted even after she got back home to the Philippines.

But don’t let the harmless fun times fool you. Didal is not settling for a one-time Olympic appearance, and a seventh-place finish as the peak of her career.

Once her ankle injury heals up, the 22-year-old will be kept busy with her inclusion in the Street League Skateboarding Championship Tour, which will kick off in Salt Lake City, Utah on August 28 to 29, Manila time.

Didal will also join the Queen of Macba event in Barcelona, Spain later this year, and while no plans for 2022 have been formalized yet, it is worth noting that she is a reigning Asian Games gold medalist heading into that year’s meet in Hangzhou, China.

For now, the young skateboarding star will take it one day at a time with her post-Olympics recovery, but she promises to get back on the grind as soon as possible to keep inspiring other young athletes like herself.

“Dream big, because I never dreamed I would be in the Olympics, and yet here I am. As long as you are having fun doing your sport, just keep going,” she said. – Rappler.com