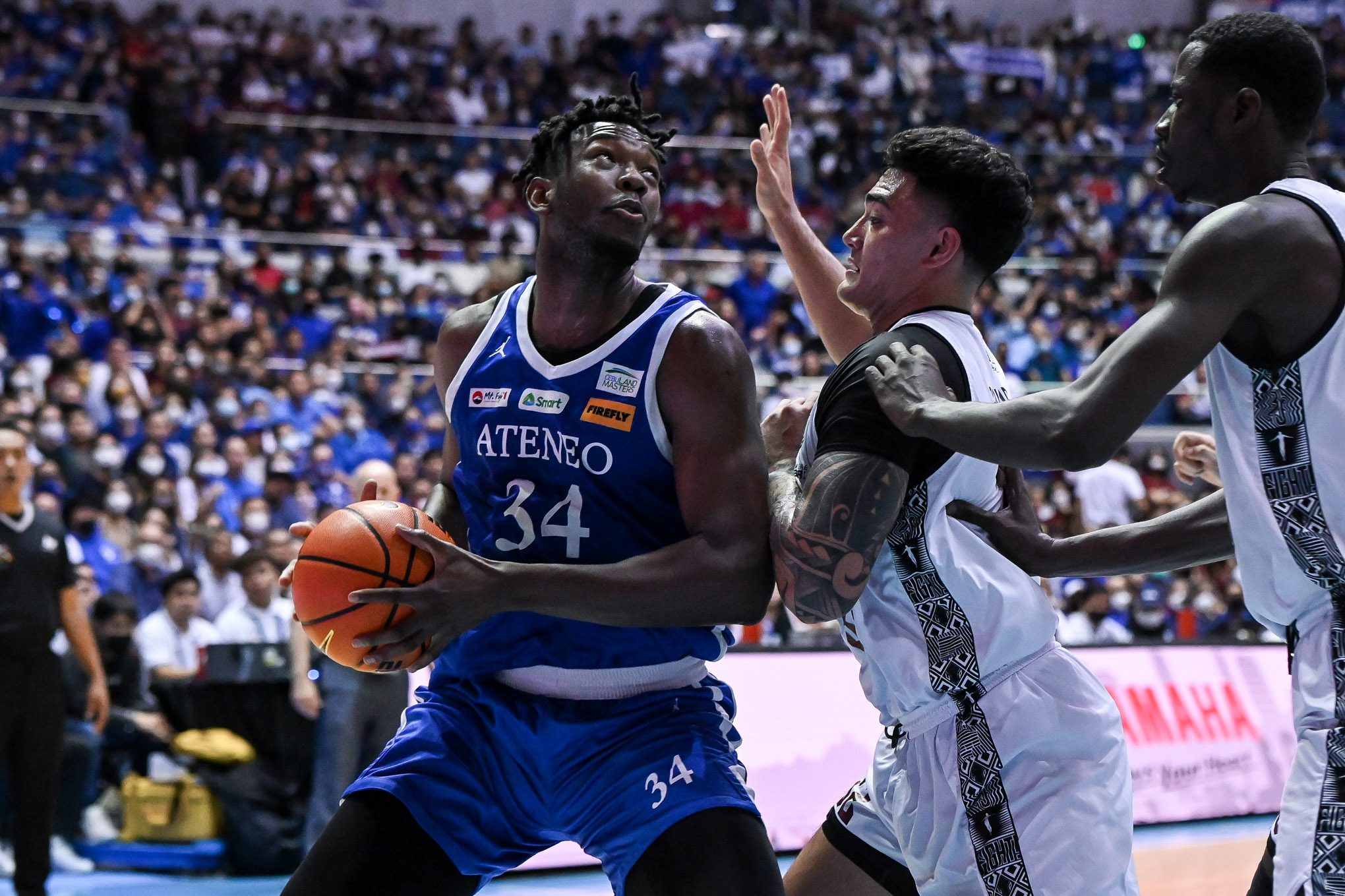 ALL-AROUND. Ange Kouame delivers another MVP performance for Ateneo against UP.

MANILA, Philippines – After a one-season absence from the top of the UAAP men’s basketball, the Ateneo Blue Eagles are back as the undisputed champions after toppling the UP Fighting Maroons in a Game 3 thriller, 75-68, at the sold-out Araneta Coliseum on Monday, December 19.

Ange Kouame wrapped up a legendary career for the Blue Eagles with the Finals MVP award after a 19-point, 12-rebound double-double plus 4 blocks.

Gab Gomez provided the early spark from downtown with 12 points on a 3-of-6 clip from deep, while graduating guard BJ Andrade added 10 points, 3 rebounds, and 2 assists.

The Blue Eagles survived the Maroons’ huge second-half fightback with Kouame making sure to restore order with clutch plays on both ends even as the last season’s champions, behind Harold Alarcon, challenged them with big buckets until the dying seconds.

“I’m so far from the forefront of this championship. It’s about these players. I’m just so grateful for their effort. I’m the lucky guy,” said Ateneo coach Tab Baldwin.

Forthsky Padrigao and Gab Gomez also chipped in 12 points each for the Blue Eagles in the heart-stopper played in front of a crowd of over 21,000.

James Spencer paced the Maroons with 14 points, while Alarcon and Henry Galinato added 12 points each.

Feeding off momentum from an ideal 9-0 start, the in-sync Blue Eagles dominated the perimeter on offense and hounded the paint in defense on the way to an 18-point first-quarter lead, 30-12, and peaked with a 52-32 gap early in the third off a Sean Quitevis layup.

In the last quarter of the season, the Maroons actually managed to get all the way back to a single possession, 67-70, after Alarcon drilled a three-pointer off his own deliberately missed free throw with 20.1 seconds to play.

However, the Blue Eagles refused to let another season slip away as Andrade calmly sank the game-sealing charities off the duty foul with 12.3 ticks left.

In a bizarre moment for Ateneo that turned magical for UP’s lost cause, team players and staff stormed the court too early with 0.7 left on the clock, leading to one last technical foul and opening the floor for injured star Zavier Lucero to take the bonus free throw before time officially expired to seal the title.