Will it be Japan opportunity or Arellano loyalty for Justin Arana? 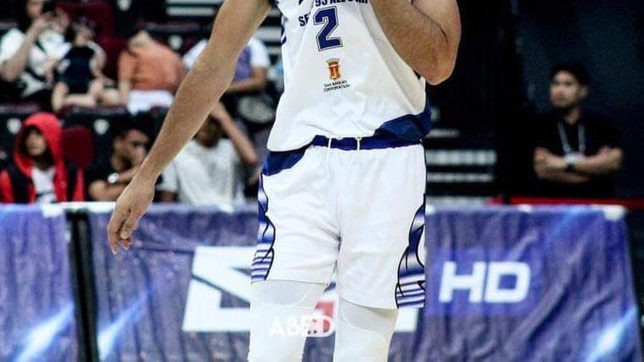 Facebook Twitter Copy URL
Copied
Justin Arana, the 6-foot-7 NCAA Rookie of the Year and Defensive Player of the Year, may join the Japan exodus

Justin Arana is one of the promising young names in the Philippines’ basketball scene, which is why it should come as no surprise that his talents have garnered the attention of scouts from the Japan B. League.

But opportunity often comes with a moment of truth. Sometimes, before taking a leap of faith, both the mind and heart play their games, prolonging one’s decision to alter the course of his or her life.

The 22-year-old from Camarines Norte has received interest from teams in Division II of Japan’s premier basketball competition. The list of blue-chippers its teams have already recruited from the Philippines may as well be a prediction of what could have been (and still be) future Mythical First and Second Teams in the PBA:

Eventually, Arana, the NCAA’s reigning Rookie of the Year and Defensive Player of the Year, could join that list. Even if he doesn’t, the collection of this nation’s basketball exports will only grow, especially once the current contracts of standouts in the PBA come to an end.

For Arana, the monetary benefit of accepting an offer in the B. League would go a long way in aiding his family, particularly since there is still a pandemic with strict government regulations in the Philippines. The annual salary of a B. League Asian import, when divided by 12 months, reportedly matches or exceeds the monthly maximum salary of a PBA player.

From that perspective, it’s clear that signing with a B. League team would go a long way in financially securing Arana and his family’s future.

So, what could possibly keep him here to stay?

“Mindset ko, is kahit last year ko, lalaruin ko para masuklian ko,” he said. (My mindset was to play my last year, so I could give back to the school.)

Arana, who now stands at 6-foot-7, was initially recruited in 2015 by Bong dela Cruz when he was the head coach for UST in the UAAP. He wound up playing only five games as a Growling Tiger, mostly because of a heart ailment his doctors referred to as “MVP” – mitral valve prolapse.

According to heart.org, “Mitral valve prolapse, also called MVP, is a condition in which the two valve flaps of the mitral valve don’t close smoothly or evenly, but bulge (prolapse) upward into the left atrium.”

Arana first felt the symptoms when his body crashed on the ground during a scrimmage and he immediately began to palpitate with difficulty breathing. The good news was that the issue was diagnosed quickly and considered “light,” so it did not require an operation to fix.

Nevertheless, the ordeal halted Justin’s rise to a starting role, put him on the road to recovery, and ultimately led to his departure from the University of Sto. Tomas.

He immediately struck a relationship with new head coach Aldin Ayo because of their common Bicol roots, but conflict with a team manager, who believed other new recruits deserved his varsity spot because he wasn’t able to play anyway, spelled the end.

(I asked permission from coach Aldin to leave. I couldn’t take it anymore, so I just decided to leave. I was supposed to return home to Bicol because I was sick, I was having a hard time. I was really down.)

(Coach Tylon Dar Juan, he was the UST assistant coach in 2016 and 2017 with coach Boy Sablan. He checked on me. It’s like God’s plan. He called when I left UST. I told him I had no more team and I’m returning home to Bicol. He said if I go home, I would put my talent to waste, I would end up doing nothing.)

That was when fate spun its wheels for Arana to become a Chief.

(He brought me to Arellano and made me talk to the president. Before I went there, I opened up about my condition, my illness. They took care of me while I was serving my residency.)

Arellano’s investment would pay off. In his FilOil Preseason Tournament debut with the Chiefs, Arana scored 16 points and hauled down 17 boards in a hard-fought loss to UAAP title contender University of the Philippines, establishing himself as a blue-chipper.

Then despite their team’s paltry 4-14 performance in a rebuilding NCAA campaign, Arana became the bright spot for new Chiefs head coach Cholo Martin with averages of 13 points, 8 boards, and 3 blocks a game on an effective 51% shooting clip from the field.

(I matured in Arellano. They’re very supportive. They really take care of the players. They revived my career. I had no more plans of playing but they came. I’m really thankful, so I need to repay all the good things they gave me. One year isn’t enough. We also didn’t make it to the Final Four.)

But to get his team back in the Final Four – when exactly will that possibility, during a time of unpredictability, present itself again?

The present and future

Arana sounds intent to postpone his Japan adventure and play out his final year of eligibility with Arellano if the NCAA basketball tournament returns in 2022, or anytime soon.

Although with Metro Manila still under quarantine, the number of reported positive COVID cases reaching their highest numbers, and face-to-face classes still not taking place, the possibility of the league’s imminent return seems daunting.

Arana was first connected with the Japanese squads through the help of coach Patrick Tancioco of Better Basketball PH, a skills-training program that the likes of the Gomez de Liaño brothers, Ricci Rivero, CJ Cansino, and many others have used to improve their overall abilities, especially with no major tournaments going on.

Arana hasn’t been told which teams specifically are interested in him, and he’d only like to find out once he’s committed to go to Japan. But he does know the interested suitors are from the B. League’s second division, and that there are more than just one.

(I can attack and play outside. I’m used to on-dribble. I think they liked that. I attack more, instead of playing in the post.)

Of course, he also brings top-tier defense as an agile big man, which is the type of mold teams look for in forwards and centers for the modern basketball game.

All of these developments are transparent.

“Lahat ng offer natatangap, pinapaalam ko sa kanya (coach Martin).” (If there are offers, I clear them with coach Martin.)

It helps that his coach is willing to let Arana get international playing exposure, even if it means the end of his collegiate career.

(He’s supportive because he knows our situation now this pandemic. It’s tough. It’s a good opportunity so he said he shouldn’t hold me back. He’s just there to support. He’s okay with whatever decision I make.)

Then there’s the other item to resolve: back in April, Arana signed with Sta. Lucia, which plans to field a team in the upcoming new FilBasket league started by former Ateneo Blue Eagle Jai Reyes.

(I want to honor my live contract. Sta. Lucia also helped me, so it won’t be good if I don’t get to play for them.)

But Arana also hopes to speak with Sta. Lucia to let him play in Japan if he accelerates that plan and is hopeful that they will want what’s best for him.

(They’re okay if a good opportunity comes my way, but of course I need to talk to them formally.)

His basketball ties in the country aren’t the only reasons giving Justin cause to pause on going pro. He admits that he would also be homesick away from his family, since it’s a feeling he generally gets quickly.

But ultimately, the rewards of playing in Japan are appealing.

(If there will be no NCAA for two years, I hope they understand because it leaves me no choice. I’m also getting older.)

The B. League’s 2021-2022 season is scheduled to debut at the end of September. Arana continues to mull his decision over and ask for updates on whether or not there will be an NCAA next season.

Taking negotiating with teams, attaining travel documentation, and fulfilling quarantine protocols into consideration, it’s likely he would only get to join close to mid-season at the earliest.

Nevertheless, it is still a possibility. Even if not this season, then maybe the next. Taiwan and South Korea-based leagues could come calling, too. There is opportunity here that could lead to grand accomplishments – a fitting and inspiring chapter following the turbulent start to his basketball career.

“Malaking tulong sa pamilya ko yun. Malala pa rin yung pandemic,” he admitted. (It will be a big help for my family. The pandemic is still bad.)

If he does go to Japan, does that mean the PBA is in the rearview mirror?

(Filipino kids who play basketball have the PBA as their goal. I also had my sights on the PBA. But now, I want to try the international route first. It’s good exposure and experience. I also get to play with bigger players.)

But, of course, his attachment to Arellano runs deep. And for good reason, given everything the program has done for him.

The question now is, what will it be? What will lead? The mind or the heart?

Or, which is often the case, does only time hold the answers? – Rappler.com