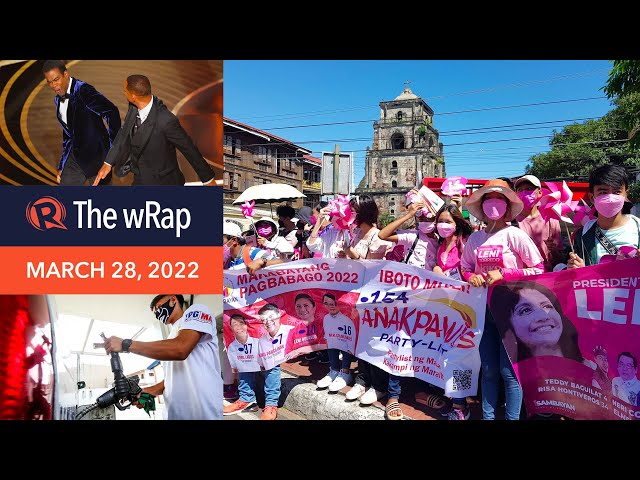 Right in the heartland of the Marcos dynasty, Ilocanos in Laoag City come out Sunday, March 27, for Vice President and presidential candidate Leni Robredo and her running mate, Senator Francis ‘Kiko’ Pangilinan.

Former Partido Reporma standard-bearer Panfilo Lacson keeps the support of three out of four of the party’s senatorial bets, following his resignation.

Rappler submits counter-affidavits to the Office of the City Prosecutor in Davao City denying accusations of cyber libel against the online media organization and its journalists.

Pump prices in the Philippines rise again just a week after a major rollback. This, as Russia’s war on Ukraine reaches the one-month mark with no conclusion in sight.

Oscars best actor winner Will Smith slaps presenter Chris Rock onstage during the Academy awards ceremony over a joke about the actor’s wife’s hairstyle. Meantime, CODA, a movie about a deaf family with a hearing daughter, wins the prestigious best picture prize. – Rappler.com