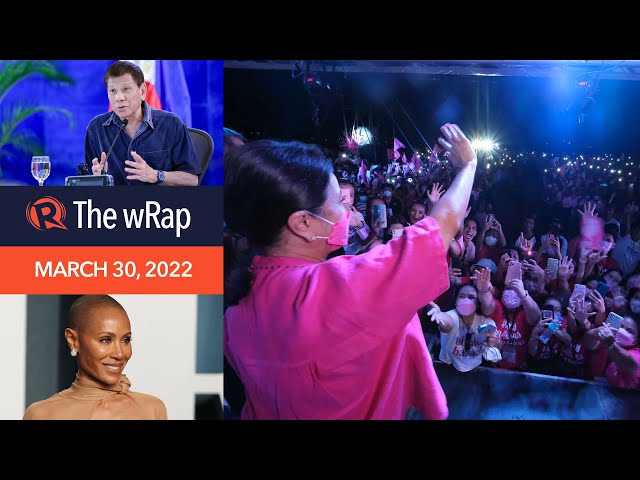 Eastern Samar Representative Marie Fe Abunda and at least 20 out of 23 mayors in the province join Governor Ben Evardone in endorsing Robredo’s candidacy.

Without name-dropping, President Rodrigo Duterte brings up the issue of unpaid ‘estate tax’ and asks the Bureau of Internal Revenue why it remains uncollected until now.

Undersecretary Lorraine Badoy faces yet another complaint before the Ombudsman over her serial red-tagging of Vice President Leni Robredo and her supporters using a government platform.

Ukraine is skeptical of Russia’s promise to scale down military operations around Kyiv and another city. This, as some Western countries expect Moscow to intensify its offensive in other parts of the country.

Jada Pinkett Smith promotes healing in an Instagram post on Tuesday, March 29. This is Jada’s first public comment since her husband slapped comedian Chris Rock at this year’s Academy Awards ceremony for a joke about her bald head. – Rappler.com