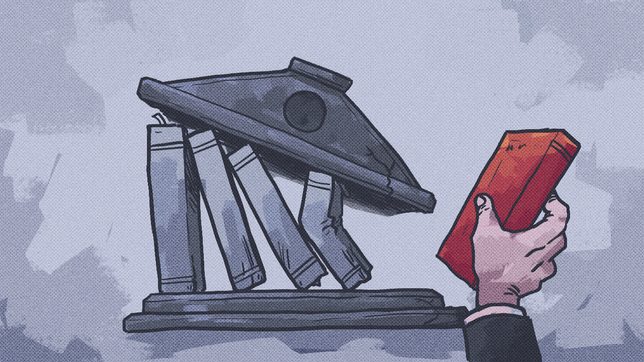 My name is Karl Castro, and I am an educator, artist, and book designer. I am not a librarian, but I am greatly indebted to libraries, as they have helped shape who I am today.

I am writing this open letter because I am deeply concerned about recent developments in Philippine libraries. To date, the libraries of at least three state universities have agreed to pull out “subversive” publications from their collections. Based on photographs released to the press, these include books of essays by Left political thinker Jose Ma. Sison, as well as documents published by the National Democratic Front of the Philippines (NDFP) pertaining to the Comprehensive Agreement on Respect for Human Rights and International Humanitarian Law (CARHRIHL) between the NDFP and the Philippine government. These are being done upon the advice of the National Task Force to End Local Communist Armed Conflict (NTF-ELCAC), an obscenely-funded inter-agency task force created by President Rodrigo Duterte.

Freedom of thought is a cornerstone of academic freedom. It is also a prerequisite for free speech which is at the heart of democracy, or the “rule of the people.” Pursuant to these ideals, libraries must be spaces where all texts may be studied without fear. The NTF-ELCAC’s drive to expunge certain books from libraries violates all these freedoms. It further impoverishes free speech, and therefore our democracy. In a time when Filipino students are still unable to return to physical classrooms and access libraries because of the pandemic, the withdrawal of books speaks of questionable priorities, to say the least.

Ideas that change the world often gain ground through books and the spaces that house them. Books arguing that the sun is the center of our solar system, as in tomes by Copernicus and Galileo, or even for the very idea of a Filipino nation, as in the novels of Rizal, were once reviled as heretical and subversive. What prevailing order then, is now being “subverted” by the idea of respecting human rights, or the idea that another order is possible, nay, even necessary?

It is telling that these acts surfaced as we commemorate the 49th anniversary of the declaration of Martial Law. Then and now, a regime that suppresses the media, silences critics, and censors libraries has no allegiance to truth.

Thus, libraries and archives play a key role in challenging unequal power relations, and consequently, pushing human progress. Like forests and temples, playgrounds and kitchens, libraries are important spaces for encountering, interrogating, and developing such ideas. It is everyone’s duty not just to defend these sanctuaries of knowledge, but to cultivate them far and wide.

Rappler Talk: Ramadan in the time of COVID-19

One may say this is much ado over the pullout of a few old volumes. And yet, in the last few years, how many of our hard-won rights have we let fall by the wayside? This is how our democratic rights are eroded: not simply through draconian laws and wanton killings, but also in granular aggressions.

Branding and banning books as “subversive materials” has no place in a democratic society. Libraries must continue to be a safe space for learning. I appeal to all educators, librarians, students, and anyone who believes in academic freedom, to look into the matter and release a public statement affirming such. No to NTF-ELCAC’s removal of books from our libraries! Defend freedom of thought and academic freedom! Defend the unending pursuit of knowledge! Assert democracy, oppose authoritarianism! Hands off our schools and libraries! – Rappler.com

Karl Castro is an artist and designer from the Philippines. He helps cultivate conversations and interventions across various creative fields, with a focus on art, design, and cinema. His areas of interest include culture, books, travel, craft, history, and Filipino identity.