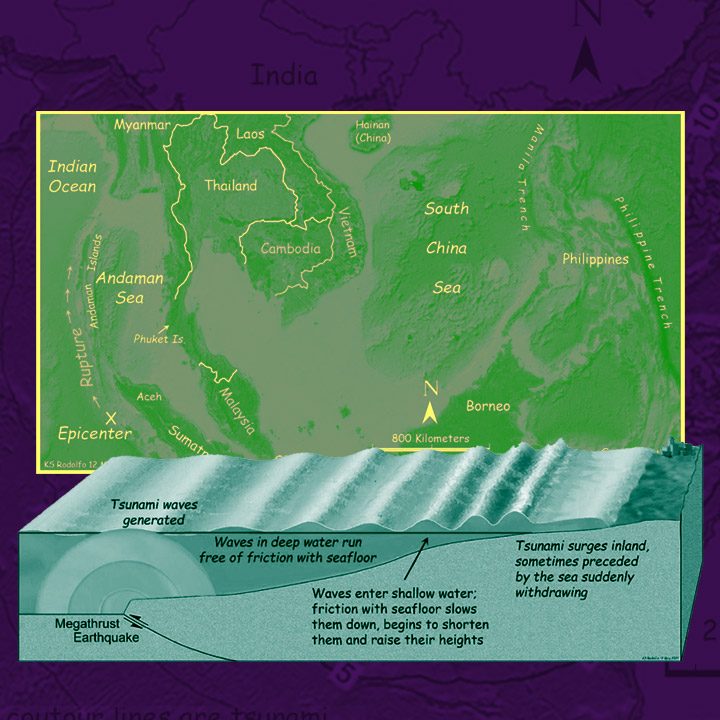 The following is the ninth in a series of excerpts from Kelvin Rodolfo’s ongoing book project Tilting at the Monster of Morong: Forays Against the Bataan Nuclear Power Plant and Global Nuclear Energy.

Our last foray explained how Mt. Natib and her sisters exist because the South China Sea Plate is being forced to thrust underneath the northern Philippines at the Manila Trench. This sets the scene for a “megathrust” earthquake, the most powerful and dangerous kind.

…is what happens after you drop a basketball on the floor, or pull and release a rubber band; also how geologists explain faulting and earthquakes. Very simply, if a large rock mass is pulled, or squeezed, or forced against another, it will deform elastically before it breaks by faulting.

Rocks in hand-sized pieces are rigid.  But in large masses like lithospheric plates, rock is remarkably elastic.

Tectonic plates push against each other only a few centimeters a year. But the plates stick, even as they continue to creep toward each other. This accumulates elastic energy, like a bow being stretched for an arrow.  Eventually, so much elastic energy accumulates that it overcomes the friction holding the two sides of the fault together. The sides snap past each other in a megathrust earthquake – by far the worst kind, including almost all of magnitude greater than “Moment Magnitude” (Mw) 8. Their danger is worsened by their unpredictability, like the Sumatra-Andaman earthquake of 2004.

And shared by the Manila Trench subduction…

The morning after Christmas 2004, an earthquake started about 160 kilometers (100 miles) off the coast of Sumatra’s Aceh province and 30 kilometers below the surface, triggering one of the worst disasters in history.

The rupture was a thousand miles (1,600 kilometers) long, and its average width was 200 kilometers, so its surface was 320,000 square kilometers. At that surface, the sides of the fault snapped past each other an average 15 meters or 50 feet. Starting at the epicenter, the rupture propagated northward an average of 2.5 kilometers per second. Yes, per second! Even at that speed, the rupture is so long; it lasted a record 10 minutes. Most earthquakes last only about a minute. It was the world’s third largest earthquake: Mw 9.1 to 9.3.

A US Geological Survey video displays how it made the seafloor move vertically.

It is hard to grasp such a gargantuan event. To give a sense of how much energy was released, the 1990 Luzon earthquake that devastated Baguio and Dagupan was a magnitude Mw 7.7, equivalent to exploding 2 million tons of TNT. But on the Mw scale, each whole number is 32 times more energetic than the last, so the Aceh earthquake expended the energy of 5 billion tons of TNT.

Here’s a cartoon of a megathrust event:

The Aceh earthquake explosively jolted the ocean surface above it into several waves that spread away from the epicenter in all directions. The waves were only about 30 centimeters high, but they were hundreds of kilometers long, so their volumes were enormous. In deep waters they moved very rapidly, around 800 kilometers per hour.

But as the waves entered shallow water, friction with the sea floor began to slow them down. This squeezed them, shortening them and increasing their heights. Unlike normal ocean waves, they did not crest and break. Instead, they arrived suddenly, usually as fast-moving surges tens of meters deep that invaded inland as far as two kilometers.

Worse, in some places including Aceh and Thailand’s popular resort Phuket Island, the sea suddenly withdrew some minutes before the first surge arrived, luring people offshore to gawk and gather stranded fish.  Among the many European tourists lost in the following surge were Walter Scholl and his wife. Walter was a German geologist who was a visiting professor at UP Diliman in the 1980s.

A ten-year-old English girl who had learned about tsunamis in school understood what was about to happen when she saw the water recede. She saved her family and other tourists by convincing them to flee to high ground. Should the Manila Trench experience a megathrust earthquake, may there be many Filipinos similarly forewarned.

A USGS video of this drawing reconstructs how the tsunamis were propagated in the northern Indian Ocean. See how a trough is Phuket’s first arrival?

But the tsunami was not limited to the area of this video. It affected all of the Indian Ocean, and parts of the Pacific as well. Two hours after the earthquake, the tsunami arrived at Sri Lanka as waves up to 12 meters high, invading two kilometers inland. In seven hours the tsunami arrived at Somalia, 5,000 kilometers from the epicenter. Four waves as high as nine meters reached about a kilometer inland, killing almost 300 people.  In all, about 228,000 people perished in 14 Indian Ocean countries.

An Indian Ocean tsunami warning system would have minimized the great loss of life in 2004, but tsunamis had not been anticipated. Similarly, there is some worry that not enough attention is being paid to the possibility of a megathrust earthquake at the Manila Trench subduction. Relying heavily on the definitive analysis of the Manila Trench region by Phivolcs geophysicists Bart and Leo Bautista in 2001, tsunami experts from China, Taiwan, Vietnam, Thailand, and Singapore are modeling how their respective countries might be affected. Here are their estimates of maximum tsunami heights:

In 2012, Leo Bautista analyzed historical records of earthquakes along the trench. None stronger than an estimated Mw 7.6 has happened since the Spanish came to Luzon in the 1560s. This low seismic activity isn’t comforting, because Luzon and the South China Sea Plate continue to converge, about 9 centimeters a year at the northern end of the trench to 5.5 centimeters at its southern end, where researchers think a rupture is most likely to occur. That is where the subducting slab is diving vertically. If the rupture happens there, upward movement against gravity, and damage, will be maximized.

The longer the delay between major megathrust earthquakes, the more elastic energy is stored. It is estimated that about 30 meters that should have slipped smoothly have instead been stored elastically at the Manila Trench subduction.

The Manila Trench subduction is judged capable of exceeding an Mw 9 earthquake every thousand years.

It took the entire Indian Ocean to absorb the Aceh tsunami. The South China Sea is so much smaller. – Rappler.com