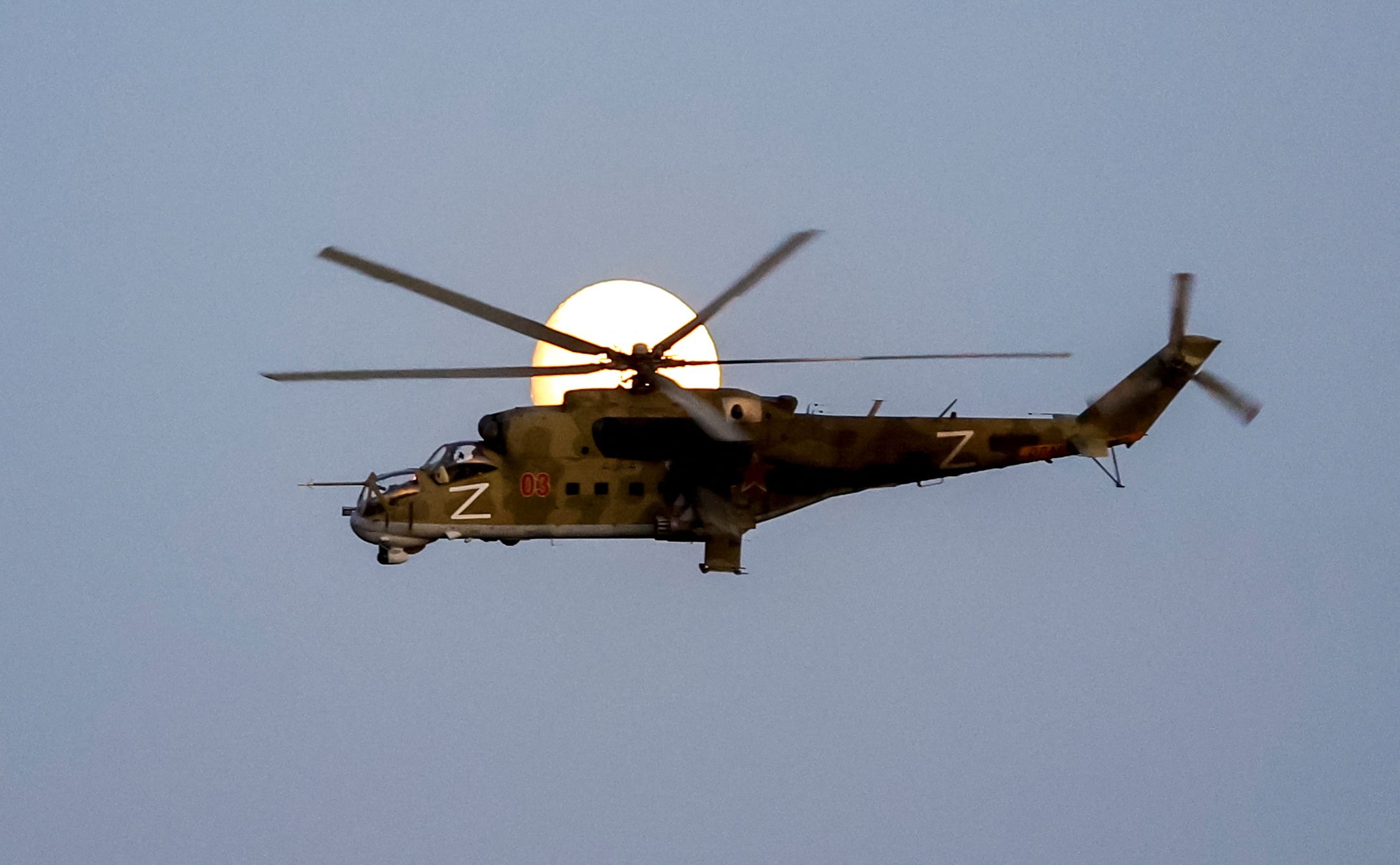 A Russian Mi-24 military helicopter flies near the reconstructed World War Two memorial Savur-Mohyla before its official reopening in the course of Russia-Ukraine conflict, as the moon rises behind, in the Donetsk region, Ukraine, September 8, 2022.

Facebook Twitter Copy URL
Copied
The draft being circulated among the 35 countries on the Board of Governors, the IAEA's top decision-making body, is a follow-up to a resolution that was passed by an emergency board meeting in March and that only Russia and China opposed

VIENNA, Austria – A draft resolution that diplomats say Poland and Canada have prepared ahead of next week’s meeting of the UN nuclear watchdog’s Board of Governors calls on Russia to cease all actions at Ukraine’s nuclear facilities, the
text shows.

The draft being circulated among the 35 countries on the Board of Governors, the International Atomic Energy Agency’s top decision-making body, is a follow-up to a resolution that was passed by an emergency board meeting in March and that only Russia and China opposed.

As in March, diplomats said the aim was to show Russia is isolated diplomatically and to pressure it to end its occupation of the Zaporizhzhia nuclear power plant, Europe’s largest, where the IAEA says the occupation and shelling from the war pose the risk of a catastrophic nuclear accident.

The draft text seen by Reuters says the board “deplores the Russian Federation’s persistent violent actions against nuclear facilities in Ukraine, including the ongoing presence of Russian forces and Rosatom personnel at the Zaporizhzhya nuclear power plant”, using the spelling of the plant’s name favored by the IAEA and referring to the Russian nuclear agency Rosatom.

The draft text prepared on behalf of Ukraine, which is not a member of the Board of Governors, has yet to be formally submitted to next week’s quarterly board meeting, diplomats said. It would then be debated and voted on.

Several diplomats said that since the wording is similar to the March resolution’s, which “deplores” Russia’s occupation of Ukraine, it was likely to pass easily and they expected few changes to its wording.

The latest text calls on Russia to “immediately cease all actions against, and at, the Zaporizhzhya Nuclear Power Plant and any other nuclear facility in Ukraine, in order for the competent authorities to regain full control over all nuclear facilities within Ukraine’s international recognized borders.”

Before the so-called operative paragraphs that spell out any action and positions being taken, the text also says the board is “underscoring” a recent call by IAEA chief Rafael Grossi for a “nuclear safety and security protection zone” around the Zaporizhzhia plant. – Rappler.com