MANILA, Philippines – The new Miss Universe has been crowned – the title went to Paulina Vega of Colombia, with ladies from the USA, Ukraine, Netherlands, and Jamaica taking the runner-up spots Sunday night, January 25 (January 26 in Manila).

Here’s a recap of the coronation night:

The pageant started with all the ladies introducing themselves in their national costumes.

The ladies’ outfits ranged from the sleek and simple to the elaborate and feathered. Miss Canada’s costume, for example, featured an attached scoreboard and a fan made of hockey sticks, while Miss Venezuela’s outfit was a most vibrant yellow, complete with branches.

Miss Philippines MJ Lastimosa gave an elegant, inspired walk, building momentum as she approached the stage. Despite negative reviews for her controversial floral dress, she pulled off a stunning, composed walk – impressive especially given all the attention surrounding her outfit.

The following judges were introduced: 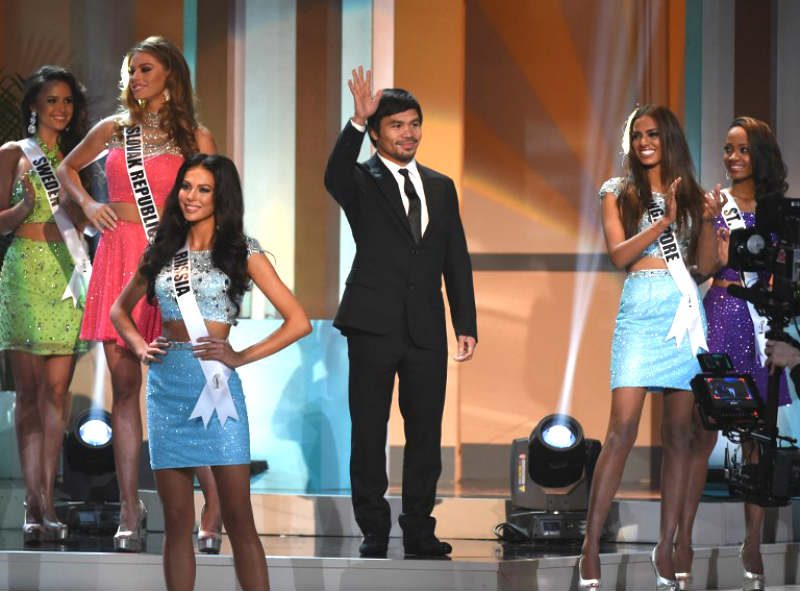 The pageant got down to business right away, announcing the top 15, which included the Philippines’ own MJ – click here for the full list.

The top 15 announcement was accompanied by a short video profile of the contestants, who spoke about their passions and advocacies.

MJ paid tribute to her uncle, who died of cancer. “He’s in a better seat now, watching me,” she said with a smile.

Gabriela Isler went up onstage to say a few words about her reign:

“My visit to the Philippines was the best part of my year,” she said. Gabriela worked with CordAid to assist survivors of typhoon Yolanda (international name: Haiyan) in 2014.

As Prince Royce performed, the ladies stepped out in their swimsuits. Following this, the top 10 were announced, with MJ once more making it into the top group. Here’s the full list. The top 5 were then announced, with Misses USA, Netherlands, Colombia, Jamaica, and Ukraine moving on. The Philippines’ MJ Lastimosa did not move forward. The Q&A round was composed of 2 parts: one question each from the different judges, and then one question for all the top 5 from social media.

Manny Pacquiao asked, “If you were given 30 seconds to deliver a message to a global terrorist, what would you say?”

Miss USA replied: “I would just say that I know as Miss USA I can always spread a message of hope and love and peace.”

She said she would do her best to spread this message to all in the world.

Giancarlo Stanton asked, “What’s the biggest change you’d like to see from young women in the next generation?”

Lisa Vanderpump asked, “If you could remove the swimsuit competition from the Miss Universe pageant, would you and why or why not?”

“If it’s gonna be nice, why not? I feel comfortable in anything. Thank you,” said a confident Miss Ukraine.

Emilio Estefan asked this question: “One in 3 women will experience in violence in her lifetime. What can be done to get that number down?”

“Crime is a global phenomenon, it does not just affect just one nation. We as people of the world should work together to prevent it now,” said Miss Jamaica.

Finally, Rob Dyrdek asked, “What could women learn from men?” “I believe there are still men that do believe in equality…I believe that’s what women should learn from men,” said Miss Colombia.

The ladies then answered all the same question from Facebook: What is the greatest contribution of your country to the entire world?

Miss USA said: “We have a wonderful influence on the world…we can give back as much as we can.”

“I’m born and raised in Amsterdam… a lot of art and history, and I’m very proud of that,” said Miss Netherlands.

Miss Ukraine lightly touched on the conflict in her country. “Now we have a very difficult situation in our country. And right now the very most important contribution is to direct all of our energies to support our army and our people. We have to restore schools, we have restore kindergartens and orphanages.”

Miss Jamaica named musician Bob Marley and athlete Usain Bolt as icons the country can be proud of.

“We are persevering people…and we continue fighting. Today, we are world leaders in many different parts,” said Miss Colombia, noting the achievements of her people.

The winners were then named. There were loud reactions to Miss Jamaica’s 4th runner-up finish, as she was one of the crowd favorites, given her spunky personality and confident delivery. It was between Miss USA and Miss Colombia in the final stages of the evening. Miss Universe 2013 Gabriela Isler eventually crowned Colombia’s Paulina Vega the winner.

Did your favorite win? Let us know in the comments below.

Meanwhile, the search for the next representative to Miss Universe is in full swing, as preparations are well under way for Bb Pilipinas 2015! – Rappler.com