Facebook Twitter Copy URL
Copied
Academics, journalists, political scientists, lawyers, and other experts come together to release a new book, 'The Marcos Era: A Reader.' But the age of disinformation poses a challenge to retelling the truth of the Marcos dictatorship.

MANILA, Philippines – With false information and political propaganda polluting the information ecosystem, academics, journalists, and public intellectuals are attempting to navigate how to regain credibility and spread truth among the Filipino masses.

This was one of the recurring topics discussed at the forum of the book launch of The Marcos Era: A Reader on Wednesday, October 12. Here, book editors and authors, some of whom included a history professor, an economist, and a journalist, talked about how certain buzz words related to the Marcos dictatorship may automatically cause pro-Marcos audiences to dismiss listening further.

“I think there is really an automatic shutdown coming from these people – once they get to hear certain words, certain topics, a manner of speaking, or identified with a certain affiliation or institution. No matter what you say, even how articulate you are, even if you present facts well, it doesn’t really matter,” said Ateneo history professor Michael Pante.

“I think there’s a lot of dismissiveness on both sides,” said book co-editor, legal historian Leia Castañeda Anastacio. “I think when certain arguments, or certain initiatives are studied from the Marcos era, there’s this tendency to also say, well they’re all corrupt, so that was all wrong.”

The Marcos Era: A Reader is an anthology of works about the different facets of the late dictator Ferdinand E. Marcos’ policies, programs, and personalities. It has chapters written by historians, journalists, political scientists, social scientists, and lawyers, among others.

But in the era of vast disinformation, what would entice most Filipinos to read a book like this? 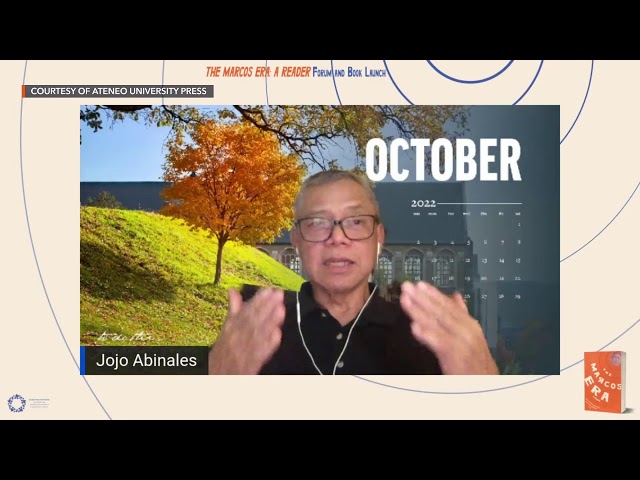 In a Pulse Asia survey released on Tuesday, October 11, majority of Filipinos or 58% said social media influencers, bloggers, and/or vloggers spread false information about politics and the government. Only second in the ranking were journalists, at 40%.

Filipinos still had strong confidence in academics, professors, or teachers, as only 4% of Filipinos thought that they were purveyors of false political information. Attempts at getting people to listen

Members of the panel shared the different ways they attempted to gain listeners without turning them off. For Pante’s chapter, “Metropolitan Trauma,” he said he attempted to be “non-academic” by writing about other angles.

“Because, for example, I give them the usual First Quarter Storm, the rallies, etcetera, it’s almost automatic for them to say, ‘Eh, I won’t listen.’ And so I tried to include in my discussions the things that often go unnoticed, like for example OPM (original Pilipino music) and how the Marcoses utilized OPM as a way to legitimize the regime,” said Pante.

For Punongbayan, it can be as simple as using Filipino or the vernacular language of the masses. Punongbayan, who is also a Rappler columnist, said he noticed that his readership increased when he started writing in Filipino.

He added other ways he communicated to make economic concepts less intimidating. For instance, instead of highlighting inflation statistics, Punongbayan would explain it like pandesal rolls are getting smaller, or one’s grocery bag is getting lighter, or one is spending more on gasoline nowadays.

“But at the same time, I realize that the information system we deal with now has evolved. There are now algorithms dictating what we see in our feeds, on Tiktok, on Facebook, and others. And I share the sentiments of Maria Ressa of Rappler – for as long as we don’t fix these algorithms, this acceleration and ballooning of disinformation will only continue,” said Punongbayan.

Punongbayan added that public intellectuals and journalists should “provide [their] audiences a menu of products of varying levels of depth,” considering shorter attention spans on social media. These can include minute-long digests, or longer explainers.

Should the stories of Martial Law be an elective or required subject in schools? Why not, Pante said, but it does not stop there.

“I think, along with it, there must be an ongoing popularization so that it does not fossilize eventually. I’m coming from the perspective of the Rizal Law for instance. It was implemented in the 1950s, and now it isn’t okay. It’s simply a requirement, a burden. And its original value has already been lost,” Pante said.

The Rizal Law, or Republic Act No. 1425, was the law enacted in 1956 mandating all educational institutions in the Philippines to offer courses about national hero Jose Rizal. Pante mentioned an example of continued popularization – Maria Clara at Ibarra, GMA-7’s new historical-fantasy drama series.

Pante also commented on how some Philippine political history modules are in “chart form,” where students memorize the accomplishments of each president. As Marcos ruled for 20 years, a chart would show him having more accomplishments than others. “So we need to remove that [and] replace it something that would highlight the stories of Martial Law victims. The stories outside of the buildings constructed, the programs, etcetera.”

Carrying on the work

Journalist Vitug said she was “very sad” about how the new Pulse Asia survey revealed journalists were second on the list of what Filipinos thought were sources of fake news.

Vitug lamented how journalism used to be seen as a noble profession, but now they are seen as purveyors of fake news. “This is the product of information starting from [former president Rodrigo] Duterte’s time. And under President Marcos Jr., during the campaign, he undermined the mainstream media by not talking to us, but not giving us access.“

“There’s a lot of things to do, but we just have to keep doing our work,” Vitug added.

Punongbayan said that while he was “heartened” by the fact that there was still trust in academics’ credibility, “we have to be on our guard.”

In July, renowned historian Ambeth Ocampo was mobbed by Marcos supporters when he commented on history to correct a remark that likened it to rumors.

“They’re after us already. So we really have to help each other out. We should look out for each other. The environment now is very perilous and conversations can get very toxic, so we just have to stand our ground,” Punongbayan said.

At the same time, Pante said that the criticisms of the press and the academe should serve as a challenge to “also interrogate our position.”

“Do we have an inherent privilege to speak on behalf of the masses, or on behalf of the Filipino people? Maybe the interrogations and accusations have merit. But it shouldn’t stop us from widening the discourse,” said Pante.

Reflecting on the new book, co-editor Abinales said that the anthology will inevitably cause discomfort, which may not be a bad thing.

“When we write, we write to make people uncomfortable. And when people are uncomfortable, they tend to shun us. And the challenge then is to continue it to a point where a small percentage of people who read and listen to us will say, ‘May punto din ito ah (This has a point)’,” said Abinales.

“I doubt if majority of our readers will read [all the pages], but hopefully it’s there to sort of bother them, to bother everyone. Not just those pro-Marcos, but also more importantly those anti-Marcos because of the history – that 15 years of darkness that we had to go through.”

The Marcos Era: A Reader will retail at P695 and will be available “soon” at the Ateneo de Manila University Press’s official website, Lazada, and Shopee stores. – Rappler.com

All quotes have been translated to English.