FINAL CHECK. A rescued Philippine eagle is given a final examination prior to its release by conservationists in Maitum, Sarangani province on Monday, June 13.

Facebook Twitter Copy URL
Copied
It is the third time since 2017 that a rescued Philippine eagle is freed back to the Mount Busa range, Sarangani’s highest peak

GENERAL SANTOS CITY, Philippines – Conservationists and local officials freed an endangered Philippine eagle (Pithecophaga jefferyi) on Monday, June 13, more than a year after it was rescued by a Tboli farmer in the hinterlands of Maitum town, Sarangani province.

The release of the adult male eagle marked the culmination of the week-long Philippine Eagle Week from June 6 to June 13.

The eagle was originally named “Salagbanog” after the place where it was saved until officials started calling it Sarangani Eagle.

It was the third time since 2017 that a rescued Philippine eagle was freed back to its natural habitat in the Mount Busa range, Sarangani’s highest peak at 2,064 meters above sea level, which straddles the towns of Maitum, Kiamba, and Maasim towns. The mountain range, however, is threatened by land conversion, slash-and-burn farming, wildlife hunting, illegal logging, and even mining, according to the Sarangani-based Environment Conservation and Protection Center (ECPC).

Worried about the safety of the eagle which belongs to a critically endangered bird species, experts from the Philippine Eagle Foundation (PEF) called on local officials and residents to do their share in ensuring the safety of eagles in their communities.

Andi Baldonado, PEF development program manager, said there is more to be done even after the release of the eagle.

“There is a need to build partnerships with the communities to ensure the eagle survives in the wild and is protected from many threats, like hunting and bird flu,” she pointed out.

In January 2021, Tboli farmer Mang Ganang found the eagle trapped among thorny rattan vines near the Salagbanog waterfalls in Barangay Ticalub in Maitum.

The raptor, then preying on monkeys in the area, suffered injuries.

Veterinarians from the Philippine Eagle Center removed a marble lodged on its right-wing bone.

The approximately three- to four-year-old eagle underwent rehabilitation at the eagle center in Davao City.

The second time an eagle was rescued in Sarangani was on December 13, 2019, when a fisherman’s family found an injured eagle along the beach in Barangay Lumatil, Maasim town.

How a Philippine eagle became a symbol of hope The eagle was observed flying around fishing boats for three days until it was found struggling on the water, said Ali Kamal.

On January 2, 2017, a severely dehydrated, overly thin Philippine eagle, with an embedded pellet, was found by a farmer in Barangay Batian in Maitum town. Batian is within the Mount Busa mountain range.

The presence of the critically endangered Philippine eagle in Mount Busa has prompted calls by local officials and environmental groups to have it declared a protected landscape.

She told Rappler that the mountain range has already been declared a biodiversity area, and is awaiting to be declared a protected area.

Palma-Gil said there were efforts to make residents of Mount Busa engage in alternative livelihoods, and keep them from their usual slash-and-burn farming method and hunting practices because these were a threat to biodiversity.

“We let them see the importance of protecting the forest because we need them to help look after the eagles and animals there for the sustainability of our last frontier,” she said. 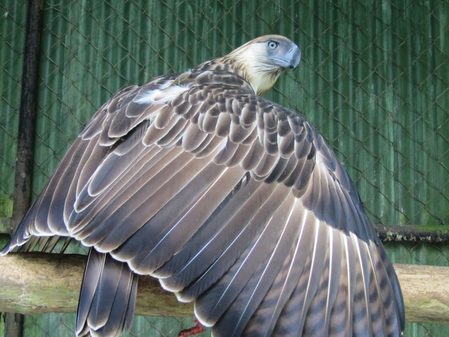