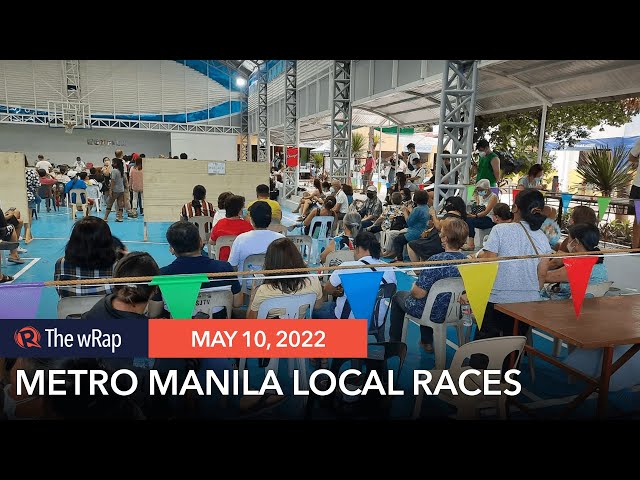 MANILA, Philippines – Metro Manila will be seeing familiar faces for the next three years as political dynasties and reelections dominated the local races in the capital region, election returns as of Tuesday morning, May 10, show.

Of the 16 cities and one municipality, eight of the emerging mayoral winners are from established political dynasties, while seven are victorious reelectionists – some of whom also come from political families.

Manila Vice Mayor Honey Lacuna is the only apparent mayoral winner who is not a reelectionist nor a member of a prominent political dynasty.

Sandoval is the wife of former Malabon Representative Ricky Sandoval, while Oreta is the brother of Malabon Mayor Antolin “Lenlen” Oreta III, who is on his third term.

Makati still belongs to the Binays, as reelectionist Mayor Abby Binay won by a landslide 338,819 votes at 100% of election returns. Her independent challenger, Joel Hernandez, got 16,640 votes.

The Cayetanos remain at the seat in power in Taguig. While Taguig Mayor Lino Cayetano only served one term, he gave way to his sister-in-law, 2nd District Representative Lani Cayetano, who is poised to win the mayoral race with 264,541 votes at 96.95% of election returns.

The Abalos family of Mandaluyong managed to keep its grip on the city as Benjamin Abalos Sr., patriarch of the dynasty, won the mayoral race in the city with 136,849 votes at 99.38% of election returns. He beat his independent opponent, Florencio Solomon.

Along Malapitan won the mayoral race in Caloocan with 306,907 votes, succeeding his father, term-limited Caloocan Mayor Oscar “Oca” Malapitan. Oca ran and won in the race for Caloocan 1st District Representative, who got 189,481 votes. These results emerged at 97.17% of election returns.

The Tiangcos are also keeping their hold over Navotas, as Lone District Representative John Rey Tiangco secured 77,571 votes in the mayoral race at 95.65% of election returns. He succeeds his brother, incumbent Mayor Toby Tiangco.

In Valenzuela, the term-limited Gatchalian siblings have successfully swapped posts, according to results from 100% of election returns. Mayor Rex Gatchalian is now set to be 1st District Representative, as he won the position unopposed with 141,794 votes. His brother Wes Gatchalian, who currently holds this congressional position, will serve as mayor after winning 275,650 votes.

In Muntinlupa, Representative Ruffy Biazon won the mayoral race with 180,742 votes at 100% of election returns. Biazon is the son of former Muntinlupa representative Rodolfo Biazon, who served in the 15th Congress.

Quezon City Mayor Joy Belmonte has secured a second term, as she enjoyed a comfortable lead ahead of Anakalusugan Representative Mike Defensor. Belmonte got 624,360 votes versus Defensor’s 393,881 at 94.08% of election returns.

Pasig City will also experience another term of Mayor Vico Sotto’s governance, as he beat rival Iyo Bernardo. At 100% of election returns, Sotto garnered 335,851 votes, while Bernardo got 45,604.

Marikina Mayor Marcy Teodoro won a third term in the border city with Rizal with 183,878 votes at 100% of election returns. He won against Nationalist People’s Coalition’s Bayani Fernando, who got 40,149 votes.

Reelectionist Pasay Mayor Emi Calixto-Rubiano won another term after securing 141,382 votes with 95.63% of election returns. She also comes from a dynasty, as the sister of incumbent Pasay Representative Antonino Calixto, who also secured another term with 147,764 votes.