Facebook Twitter Copy URL
Copied
Sagip Representative Rodante Marcoleta is 'widely known for slashing the budget of the Commission on Human Rights to P1,000 in 2017,' says the Marcos-Duterte campaign team. He also voted against the ABS-CBN franchise renewal. 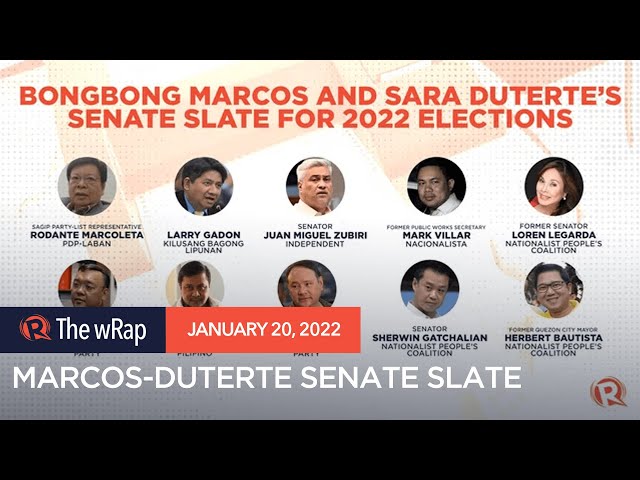 MANILA, Philippines – The tandem of Ferdinand “Bongbong” Marcos Jr. and Sara Duterte on Thursday, January 20, finally unveiled its senatorial slate for the 2022 elections – the last pair to do so.

The Marcos-Duterte campaign team identified the 10-member slate as the followig:

The team described Marcoleta as being “widely known for slashing the budget of the Commission on Human Rights (CHR) to P1,000 in 2017.”

The House of Representatives, dominated by administration allies, slashed the CHR’s proposed 2018 budget as the commission stood its ground against state abuses under President Rodrigo Duterte’s rule, but the Senate increased the CHR’s budget. The commission eventually got a P508.5-million budget, over P100 million less than what it had asked for.

Marcoleta also pushed to deny broadcast giant ABS-CBN its franchise, something that the lawmaker is particularly proud of and boasts of during events.

Marcoleta is a member of the influential religious group Iglesia ni Cristo, which is known for its bloc voting practice, and whose endorsement is sought after by candidates.

Gadon is a rabid Marcos loyalist and part of the Kilusang Bagong Lipunan (KBL), the party that the late dictator Ferdinand Marcos founded.

The team said “Gadon, a law practitioner, had been helping the BBM team for years and has slowly climbed the senatorial survey just a few notches lower from the top 12.”

Gadon’s license practice to practice law is suspended indefinitely as the Supreme Court assesses if he should be disbarred. The High Court took a motu proprio action, or acted without any complaint, to suspend Gadon after he posted a video of him hurling expletives at journalist Raissa Robles who had made critical comments against Marcos.

In the December 2021 senatorial preference survey of Pulse Asia, Gadon placed 24th, or a full twelve places below the Top 12.

Zubiri, who is an independent candidate, is also in the slate of Vice President Leni Robredo, and senators Panfilo “Ping” Lacson and Manny Pacquiao.

“The addition of Senator Zubiri in the BBM-Sara UniTeam has bolstered the unity ticket’s already sturdy position in Mindanao, which is his family’s traditional bailiwick,” said the Marcos-Duterte team.

Gatchalian is also a new addition, although Sara Duterte said that the senator had offered to be her vice president in case the presidential daughter decided to seek the top post. Gatchalian attended the tandem’s virtual caravan on Wednesday, January 19.

Roque, Estrada, and Villar were the first to be named in the slate, either by way of their own announcement or following a public event where they joined the tandem.

Roque’s endorsement of Marcos is criticized because he was a human rights lawyer who, as part of Congress, joined efforts to institutionalize the payment of compensation to Martial Law victims.

Estrada, a plunder defendant, was named to the slate when his family and former president Gloria Macapagal Arroyo formed an alliance with Duterte and Marcos.

Marcos said Estrada, on trial for allegedly pocketing millions from his pork barrel, was just a political target of the Aquino administration. Estrada was granted bail by the Sandiganbayan.

“The list represents a mixture of seasoned and proven political personalities who have excelled in their respective endeavors,” said Rodriguez.

Of the 10 in the Marcos-Duterte slate, Legarda, Zubri, Gatchalian, and Estrada were in the Top 12 of the latest Pulse Asia survey. – Rappler.com