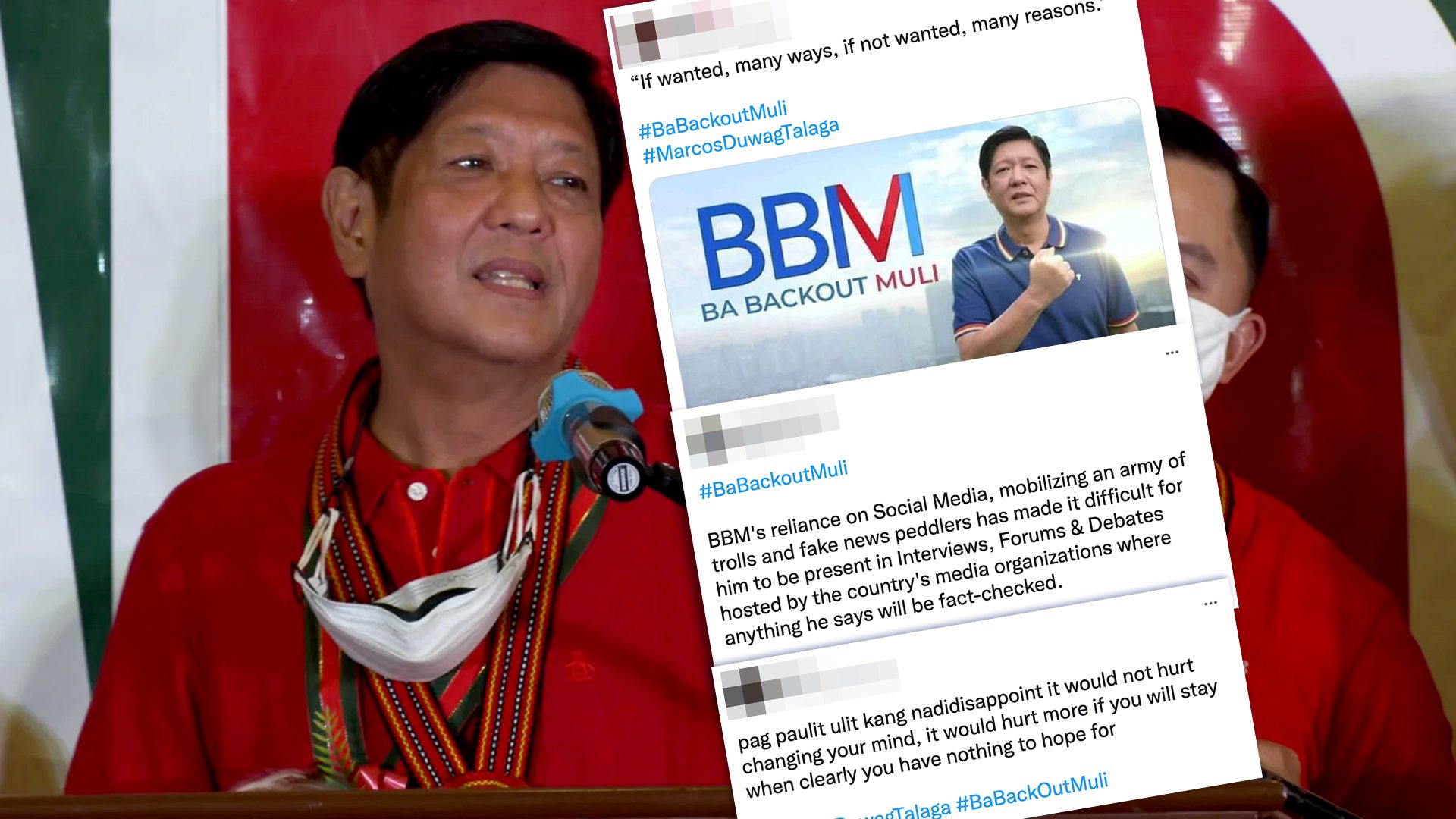 KBP is comprised of some of the biggest news organizations in the country.

The KBP Presidential Candidates Forum, expected to be heavily covered by the local media, will happen on Friday, February 4.  Of the six presidential aspirants invited by the KBP, only Marcos begged off.

Marcos though did attend some interviews. He guested previously in Toni Gonzaga’s ‘Toni Talks.’ Marcos also participated in the interviews of Boy Abunda, social media consultant Trixie dela Cruz, which was attended by select media personnel, and DZRH.

Since the announcement of his absence in the KBP forum due to conflict in schedule, netizens criticized the presidential aspirant for what they perceived as his “cowardice.”

The social media backlash saw the hashtag #BaBackoutMuli trending. It poked fun at Marcos’ 2022 election campaign slogan, ‘Bangon Bayan Muli,’ which is a play on words for his nickname, ‘BBM.’ Another trending hashtag was #MarcosDuwagTalaga.

Some users questioned Marcos’ ability to be a transparent leader if during the campaign season, he dodged interviews and cherry-picked his exposure.

Aside from transparency, some netizens said Marcos’ absence in critical interviews showed “his lack of competency” to become a president.

Comelec Spokesman James Jimenez said Marcos’ absence from the KBP forum could be a  “red flag” for voters. This was echoed by Kontra Daya convenor Danilo Arao, adding that this attitude of Marcos could be taken against him even by his supporters.

Since this was not the first time that Marcos was skipping an interview, some people have called out supporters still “defending their presidential candidate.”

User @jimgumboc tweeted, “If someone won’t give you time, gives you so many excuses without a plausible reason, and has a lot of red flags, will you still defend that person?”

Without naming any candidate, Panganiban concluded: “‘Wag magpabudol at ‘wag sa magnanakaw.” (Don’t be fooled and don’t fall for thieves.)

With his sincerity in question, a few netizens tried to figure out why Marcos’ camp was okay letting their candidate skip important interviews with heavyweight journalists.

Why is Marcos afraid of journalists? In the recent Jessica Soho interviews, which he also passed over, Marcos said he declined because the veteran broadcaster was ‘biased against the Marcoses.’ In another interview with radio station dzBB, Marcos cited connectivity issues. In a recent Comelec hearing about his disqualification case, Marcos failed to attend, claiming he was too sick.

Analysts said that Marcos’ candidacy leaned on his family’s control of propaganda– controlling media exposure was a part of his strategy.

With the campaign period starting on February 8 and only less than a hundred days before the election, the presidential bet will soon have to face more interviews and interrogations from the media and the public.

Here are netizens’ reactions on the issue: