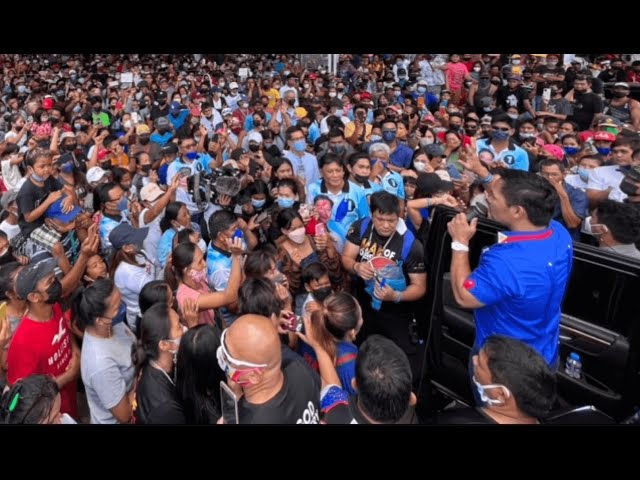 ILOCOS NORTE, Philippines – For presidential bet Manny Pacquiao, there’s no such thing as a “Solid North.”

On Wednesday, April 20, Pacquiao braved Ilocos Norte – the bailiwick and political base of the Marcoses, crunching his supposed two-day sortie in Ilocos provinces into one day.

From Laoag City, Pacquiao went around other towns during his motorcade, and, unsurprisingly, not a lot of people were outside their homes to see him. After all, Ilocos Norte largely supports survey front runner Ferdinand “Bongbong” Marcos Jr., with an 87% preference according to the latest Pulse Asia survey.

But when Pacquiao made a pit stop at Piddig town it was different scenario. A crowd waited for Pacquiao’s arrival and flocked his vehicle as they hoped to get a glimpse of the boxing icon and presidential candidate. It was a similar scenario when Pacquiao arrived at Solsona town.

During the media briefing, Pacquiao thanked Ilocanos for the warm welcome.

(I feel joyful and happy – I am very happy – because of the warm welcome from the people of the north. Here, I confirmed, that the north is not ‘solid’ for Marcos Jr..)

This is not the first time that Pacquiao asserted that Ilocos Region was not as solid as it seemed. Pacquiao made the same claim in Pangasinan, where he received the backing of Urdaneta City Mayor Rammy Parayno.

Pacquiao said Wednesday that he was expecting that he could get numbers in Ilocos Norte.

“Inaasahan ko na makakakuha ako ng malaking boto dito sa norte,” he said. (I am expecting that I could get a huge number of votes from the north.)

On Wednesday, Pacquiao also answered questions regarding his non-appearance at the controversial Easter Sunday press conference. Since Manila Mayor Isko Moreno asked Vice President Leni Robredo to withdraw from the race, the former has consistently attacked her camp.

Asked about this, Pacquiao said that attacking candidates should not be a problem, but only if one speaks about the truth.

(I also attack other candidates whenever I am asked, but I only speak about the truth. We shouldn’t make up stories just to bring down another candidate… It is not good to fabricate stories to malign another person, especially if baseless.)

Halfway through the campaign, Pacquiao has been hitting the Marcos Jr. over corruption and illegal drug issues.

At one point, Pacquiao even warned the public that another Martial Law could happen if Marcos Jr. becomes president in a bid to use the executive power to erase their wrongdoings and tax liabilities and reclaim their seized assets.

While Pacquiao did not pay courtesy visits to local officials as he usually does, his support group was able to secure the town plaza in San Nicolas for a prayer-slash-political rally late Wednesday afternoon.

According to the police in the area, some 1,500 people attended the rally at San Nicolas Plaza.

Pacquiao was the first Marcos challenger to hold a political rally at the heart of “Solid North,” so close to election day.

San Nicolas town allowing Pacquiao to hold a rally in Marcos country speaks volumes – even if he was not seen during the rally – because this is Ilocos Norte after all.

The Marcoses, it seems, see the Valdez clan of San Nicolas as political rivals in their bid to consolidate power and solidify their bailiwick.

In 2019, entrepreneur Hilario Valdez was defeated for the second district congressional seat by Angelo Marcos Barba, a cousin of the Marcoses. – with a report from John Michael Mugas/Rappler.com

John Michael Mugas is a Luzon-based journalist and an awardee of the Aries Rufo Fellowship.