HIS CHOICE. Vice Presidential candidate Sara Duterte is serenaded by host Willie Revillame, who has endorsed her 2022 bid.

CEBU, Philippines – In front of a crowd that had lined up and waited for hours on a hot March evening, vice presidential hopeful Sara Duterte made her campaign pitch and got a push, not from a top official of the vote-rich Cebu province, but from a popular TV show host with a fervent fan base and millions of followers on social media.

It’s what some would see as an unusual campaign stop but for close observers of Philippine electoral politics, Willie Revillame’s endorsement of the Davao City mayor makes perfect sense.

Revillame has hosted a variety game show since the mid 2000s. In the show, Revilla gives out hundreds of thousands in cash to contestants, audience members, and, during the pandemic, those who dialed in. During the pandemic, Revillame even spoke of his pandemic charity efforts during an official Palace briefing.

The evening began with the usual Wowowin segments. There was a long song-and-dance number where Revillame hyped the crowd at the Cebu City Sports Center, a round of “Hep Hep Hooray,” and several rounds of a relay game where teams tried to pop the most number of green balloons in the fastest time possible. In each game, winners and some contestants got at least P5,000 in cash.

Towards the end of the show, Revillame switched shirts – from his orange to Duterte’s green – to sing a tweaked version of his song, “Ikaw Na Nga,” dedicated to the Davao mayor. While the March 18 show was Duterte’s first appearance on Revillame’s show as an official candidate, Revillame had earlier announced he was endorsing the Davao mayor. 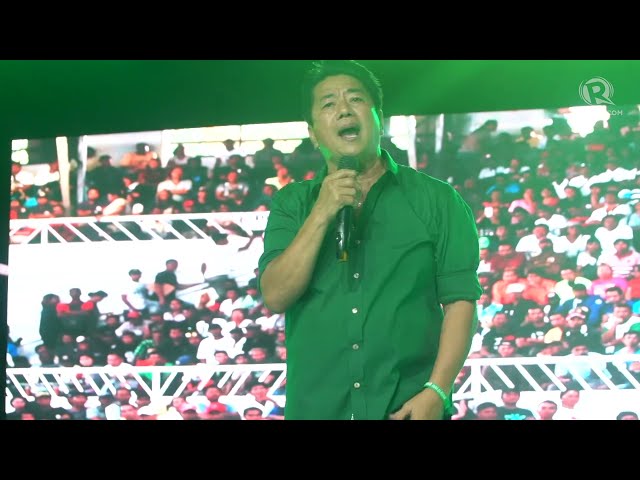 Sara Duterte, who had stops in Liloan town and a meeting with the Cebu governor earlier in the day, sat on stage as a video montage of her photos played on the LED screen behind them. A message from her father, President Duterte, also played on screen.

Revillame repeatedly referred to Sara Duterte as the country’s “ilaw ng tahanan (literally: light of the home),” a phrase that’s usually used when referring to a Filipino mother.

Posters of Sara Duterte were also displayed prominently on the Wowowin stage alongside posters of Sam Versoza, CEO of a direct-selling company and nominee of “Tutok to Win,” a party-list group that claims to represent the poor. Tutok to Win is also the name of Revillame’s online game show, where Versoza’s Frontrow was one of the sponsors.

Duterte, in turn, delivered her usual campaign speech. Revillame had been encouraged by President Duterte himself to seek a Senate post, but the popular TV host declined.

In the course of the 2022 campaign, candidates, campaign teams, pundits and the media covering the elections, will never stop harping on how crucial Cebu is.

First, there’s the matter of Cebu (including Cebu City, Lapulapu City, and Mandaue City) being the most vote-rich in the country, with over 3.28 million registered voters as of 2022.

Teodoro is now running for senator under Marcos Jr. and Sara Duterte’s Uniteam alliance, while Macapagal-Arroyo is president emeritus of Uniteam member Lakas-CMD, a party Sara co-chairs. Robredo, while now running as an independent candidate, is still head of the Liberal Party, which Aquino and Roxas used to head at different points.

The ruling party, headed by incumbent Governor Gwen Garcia, has already endorsed Duterte for vice president but has yet to announce its presidential bet. Liloan Mayor Christina Frasco, Sara Duterte’s spokesperson and daughter of Governor Garcia, backs both Marcos Jr. and Sara Duterte.

At the inauguration of the Uniteam headquarters in Liloan, the One Cebu logo was on a massive Marcos Jr. and Sara Duterte poster, alongside the logo of “Team Frasco,” Frasco’s local coalition with her husband, who represents the Cebu district which Liloan is part of. 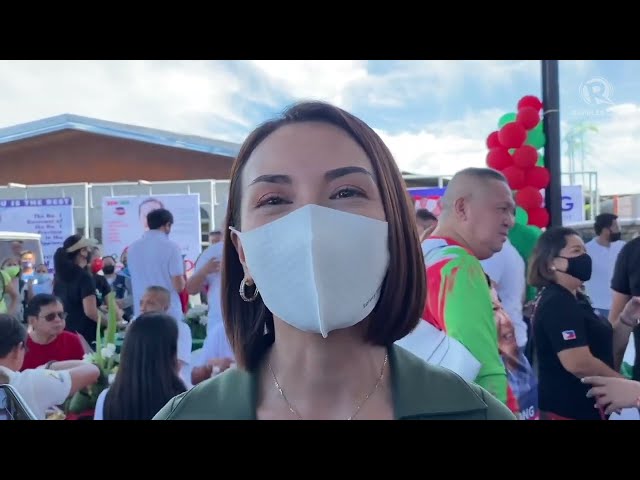 Frasco told reporters that the One Cebu logo was there because Team Frasco is part of the bigger One Cebu.

Frasco, who is also a Lakas-CMD member, said that based on the “pulse” of their constituents, both Marcos Jr. and Sara Duterte are “beloved” by Liloanons and those under the 5th District of Cebu province.

Asked if the same could be said of the rest of the province and if One Cebu’s endorsement would eventually extend to Marcos Jr., Frasco said: “We are also very respectful of the official process of One Cebu and we eagerly await the announcement of One Cebu as to its presidential candidate.”

Sara Duterte met with Governor Garcia privately during her March 18 visit to Cebu, but this was closed to media. Also accompanying Sara Duterte to the inauguration of the Uniteam headquarters were her campaign managers Majority Leader Martin Romualdez and Davao Occidental Governor Claude Bautista. Romualdez is president of Lakas-CMD while Bautista heads the Davao-based Hugpong ng Pagbabago.