RESCUE. A cop from Baler, Aurora pulls out a resident of Sitio Tabon, Brgy. Buhangin, from a creek after chancing on him in a late-night patrol on January 6.

Baler and Dingalan towns are the most affected, with each reporting 1,000 affected families, followed by Dilasag with 400.

The report said 214 families needed to evacuate to temporary shelters and that there was no report of casualties.

Police and first responders in Baler were still rescuing folk around 11 pm on January 6.

PDRRMO officer Elson Egargue said the clearing operations in Aurora are still ongoing as the road in Maria Aurora going to Nueva Ecija is still closed on both lanes.

Persistent rain ranging from moderate to intense caused floods, landslides, and a 12-hour power failure in Aurora province on Friday. 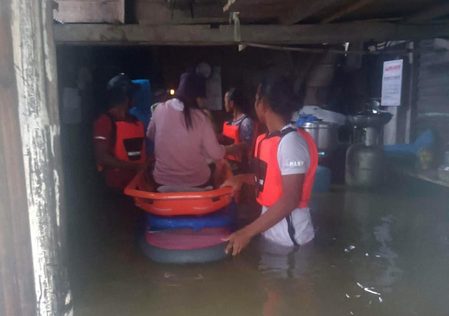