MANILA, Philippines – There is a need for “serious fundraising” as costs of exhumation and cremation of drug war victims whose grave leases have expired remain out of reach for poor families, Catholic priest Flavie Villanueva said in a Newsbreak Chats episode aired on Thursday, January 27.

Villanueva leads Project Arise under Program Paghilom, which gives assistance to widows, orphans, and families of drug war victims. He started the project in 2021 when he discovered that many families were “already getting anxious” since they could not afford the P4,500 lease renewal fee per term or for a five-year period.

The project seeks to provide a dignified burial for victims, given that an unrenewed lease would mean that their bones would be removed from the grave and thrown into a mass grave.

The entire process of exhumation and cremation, which includes permits and the urn, costs at least P45,000 for one family.

Project Arise has helped in the exhumation and cremation of 44 drug war victims, sustained by donations and personal loans. But there is much to be done.

“In fairness and in all honesty, there are those who have helped us and we continue to appeal for help because lumalaki na ang utang ko (my debts are rising). But seriously speaking, we do continue to seek help for this because, honestly, I don’t have the money for this,” Villanueva told Rappler’s investigative editor Miriam Grace A. Go.

“Since this will continue [for] the next five years, there is serious fundraising that has to be done for this,” he added. You can also reach out to the foundation by messaging them on Facebook.

Duterte’s violent war on drugs, which started in 2016, has killed almost 7,000 in police operations alone, with numbers reaching up to 30,000 when victims of vigilante-style killings are included.

The grave leases of those killed in 2016 and early 2017 are already up for renewal.

“I believe it’s retraumatizing [the families] because they have lost their loved ones suddenly, and then they’re losing them again because they have to make a choice between food on the table or have to sell the house to save some money in order to renew the contract in the cemetery,” Villanueva said.

The series features the stories of four families who have just exhumed their dead. Recalling his conversations with the families, Talabong said they felt like they underwent the process of feeling shock and grief, the same emotions they felt upon learning the death of their loved ones five years ago.

(Five years have passed and their loved ones were already exhumed, and yet there’s still no justice. They’re unable to move on, and on top of that, the bodies of their relatives are being evicted from the cemetery.)

Helping the families is no easy task. But Villanueva is determined to assist each family who calls for help.

“If there are more [families who’d ask for help], I would pursue it,” the priest said.

“I would set aside the issue of finances, a day’s work – not even worth thinking about so long that we’re not leaving a grave unattended.” – Rappler.com 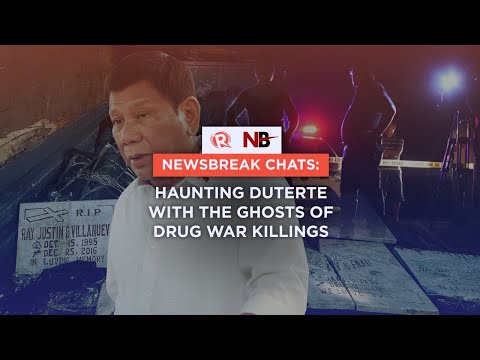