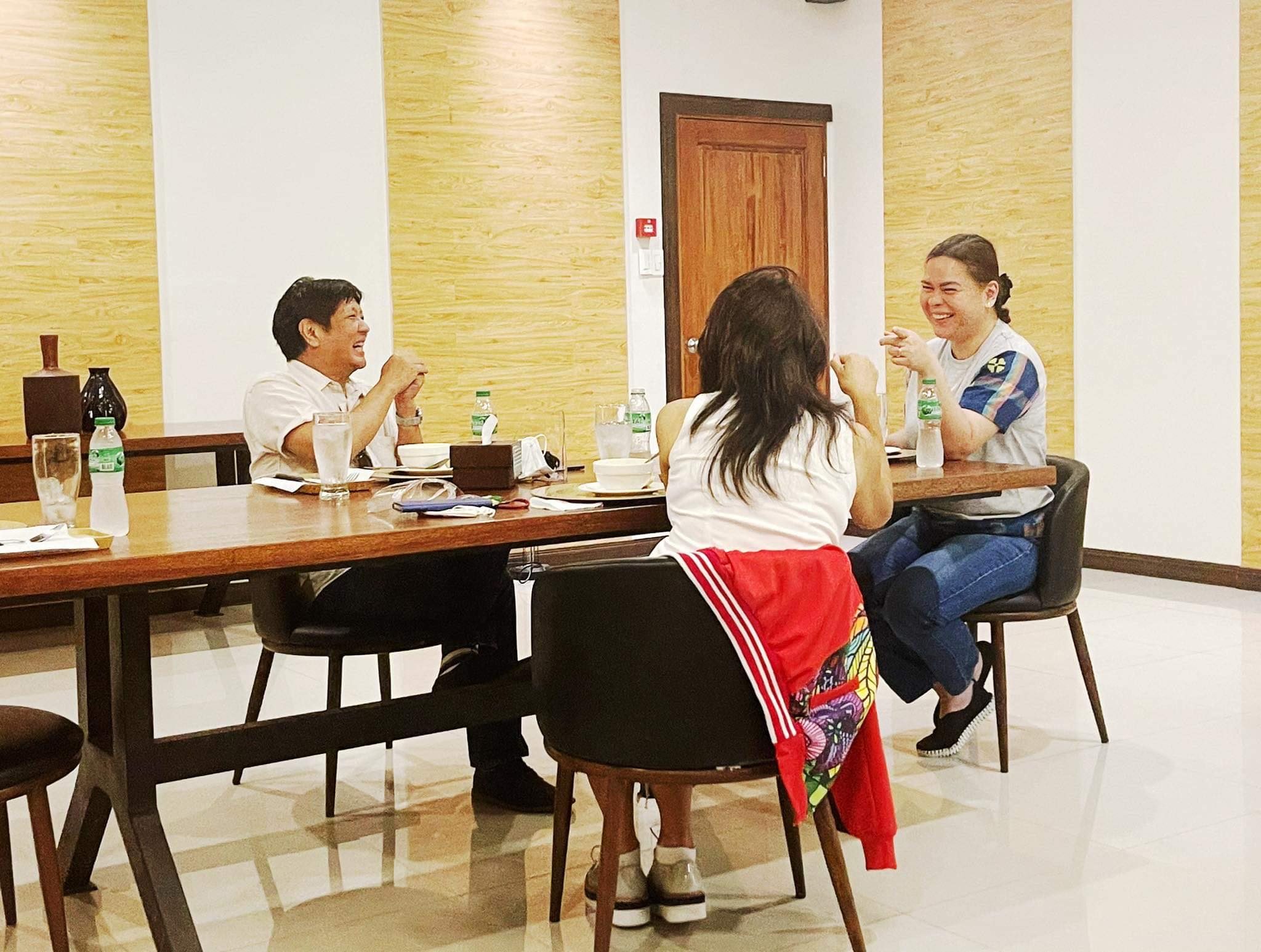 Davao City Mayor Sara Duterte meets with former senator Bongbong Marcos and Senator Imee Marcos (back to camera) over lunch at Prime Bistro restaurant in Davao City on May 29, 2021.

Facebook Twitter Copy URL
Copied
What are the possible scenarios for Duterte and his allies now that candidacies have been filed?

It is a Friday afternoon, October 16, the deadline set by the Commission on Elections (Comelec) for the filing of candidacies. The rain is pouring and supporters of Davao City Mayor Rodrigo Duterte are undeterred, waiting for him outside the Comelec office in Manila. They are expecting him to show up and file his candidacy for president.

But it is an obscure politician by the name of Martin Diño who rushes in before 5 pm. With his forms in tow, he says he is running for president under the PDP-Laban party, of which Duterte is a member.

On another Friday, November 27, about two weeks before the deadline for the substitution of candidates, Duterte withdraws from the Davao mayoral race and declares his bid for the presidency. A representative files his candidacy in Manila. By this time, Diño is out of the picture, having bowed out of the contest earlier.

A photograph taken in the Comelec office in Davao shows father and daughter holding their certificates of candidacies (COC) for president and mayor, respectively. Sara smiles radiantly but her father’s lips are pursed. Both are substitute candidates. Sara Duterte Carpio, a former Davao City mayor, is running for mayor as her father’s substitute candidate while Duterte is taking the place of Diño.

This is a last-minute decision, Sara says, finalized the night before.

It is October 8, a Friday, the last day for the filing of COCs. Supporters of Sara Duterte arrive in a caravan outside the expansive Harbor Garden Tent of Sofitel, a hotel by the Manila Bay. This is the place Comelec chose for the week-long ritual to avoid crowding as the pandemic still seethes in the country.

Days earlier, Sara filed her COC for third term as Davao mayor. But her followers clamor for her to run for president.

The anticipation builds up as the hours drift by. There is no sign of Sara.

Then, thirty minutes before the 5 pm deadline, Ronald “Bato” de la Rosa, senator and loyal Duterte ally, is almost breathless as he goes into the tent. He is PDP-Laban’s candidate for president.

He learns of the party’s decision to field him to the top post at about 3 pm. He is himself surprised but he’s a good soldier.

“He is not the best presidential bet but he is available,” a PDP-Laban official says.

This scene is still to be completed on or before November 15, the last day for substituting candidates. De la Rosa can always return to the Senate should he be asked to give way to another presidential candidate.

What we’ve seen happen at the Sofitel tent is still inconclusive. PDP-Laban, just like in 2015, can pull off another down-to-the-wire drama.

But here’s the irony: The ruling party, with its resources and clout, has no strong contender in the presidential election.

First sign: It picked Senator Christopher “Bong” Go as its bet for vice president. He was rating low in the early presidential polls. Add to this his supposed links to the Pharmally corruption scandal, tainting him.

Even if Duterte accompanied Go during the filing of COC, the President’s powerful presence couldn’t erase the fact that there was an obvious absence: Go’s running mate. Go appeared like an orphan candidate, twisting in the wind, unsure of who would be his party’s presidential candidate.

Second sign: PDP-Laban has failed (so far) to persuade Sara to join its ranks and run for president. Early polls showed Sara to be a leading choice for president.

The party’s Plan B is uninspired. Its shallow bench shows that, through its years in power, PDP-Laban was unable to grow the party and develop leaders. It has apparently relied on the President who, in turn, set his eyes no further than his daughter and his aide turned co-president. Furthermore, it has been fractured by infighting.

As we know, Philippine politics can be chaotic and full of surprises. Let me hazard two scenarios here – an attempt to make sense of what’s happening.

Should the President’s daughter join the presidential race, Duterte would have his wish come true. She is widely expected to protect her father from the International Criminal Court (ICC) investigation of his drug war and other court cases that would come when he steps down in June 2022.

Sara revealed in August that her father sent her two letters giving her two choices to consider in her political plans: either she support the Go-Duterte tandem or she take in Go as her vice president. At the time, Duterte said he wanted to run for VP.

In a Facebook post, Sara gave her father and his party mates a piece of her mind. “It is not my fault that no one among you [PDP-Laban] is a leader worthy of the respect of the majority.” She also disparaged the party as a “sitcom” and pointed out that she is not a “Last Two Minutes person,” capping her post with this stinging line: “I refuse to be a political punching bag for a party in complete disarray.”

It remains to be seen if Sara will eat her words – and join the party she so wholeheartedly mocked.

Another political party, the Lakas-CMD of former president Gloria Arroyo, is wooing Sara to run under its banner. Arroyo is an ally of President Duterte. Lakas-CMD fielded a placeholder candidate for president, a certain Ana Capela Velasco, while waiting for Sara’s decision.

Whichever party Sara chooses, the first thing she has to do is to swear in as a member.

If Sara does not run, however, Ferdinand “Bongbong” Marcos Jr and Go may enter into a coalition, with Duterte’s endorsement. Among the presidential candidates, Marcos’s positions hew closest to those of Duterte, from the drug war to China and the West Philippine Sea.

He can be a reliable ally since it is unlikely that he will exact accountability from Duterte for the thousands of extrajudicial killings. Marcos has said that he will not cooperate with the ICC in its probe of Duterte’s drug war.