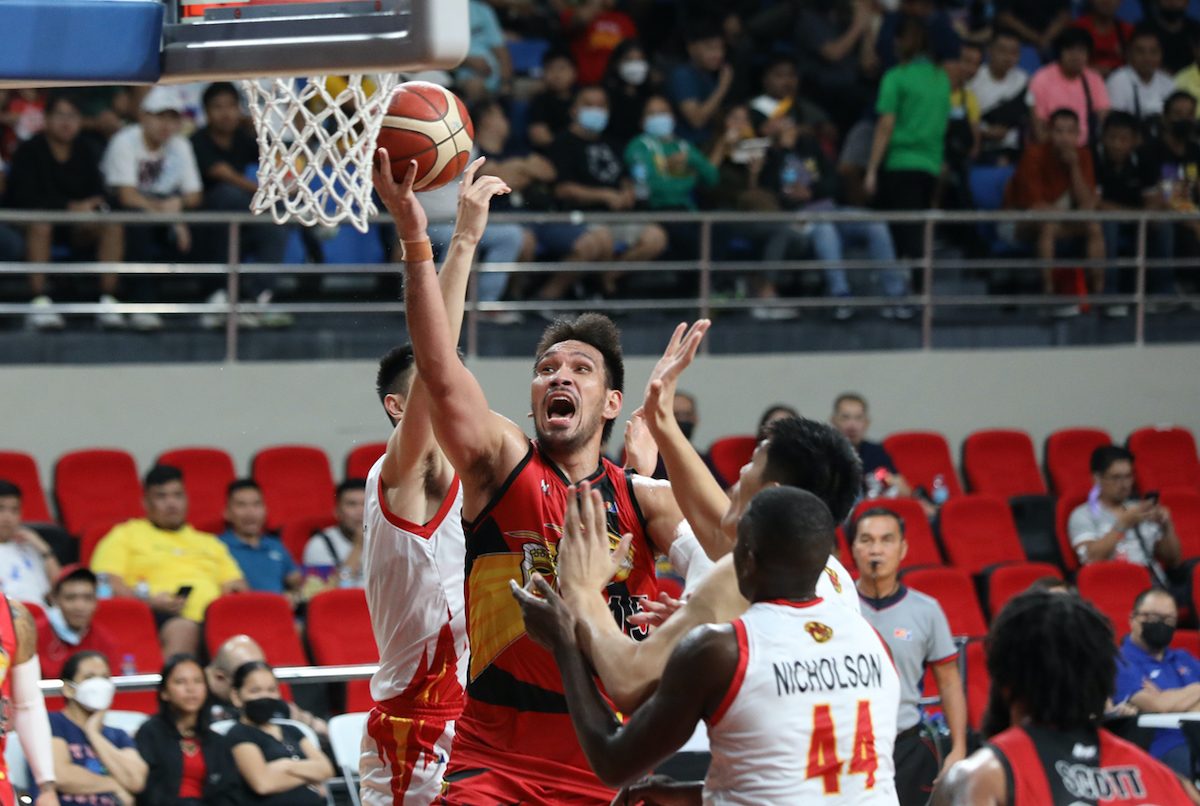 AT LAST. June Mar Fajardo dominates inside as San Miguel finally gets one over Bay Area.

MANILA, Philippines – San Miguel kept its title-retention campaign in the PBA Commissioner’s Cup running after finally beating Bay Area, 98-96, in Game 3 of the semifinals at the PhilSports Arena on Sunday, December 18.

Simon Enciso knocked down the go-ahead three-pointer and Devon Scott came up with the win-sealing block as the Beermen defeated the Dragons for the first time in four tries this conference to trim their deficit in the best-of-five series to 1-2.

Bay Area grabbed a 96-93 lead behind a Kobey Lam trey with a minute left before Scott pulled San Miguel within a whisker off a pair of free throws, 95-96, and Enciso sank a triple to give the defending champions the upper hand.

Lam scored the game-winning bucket in their Game 1 victory, but he failed to replicate the same feat after witnessing his potential game-tying layup swatted away by Scott with seven ticks remaining.

The Beermen then pulled off another key defensive stop on Hayden Blankley to preserve the win and deal the Dragons their first loss in the playoffs.

Scott finished with 25 points, 14 rebounds, and 2 blocks in the victory to make up for his lackluster performances in the first two games of the series that saw him combine for just 23 points.

“This is an indication that Bay Area is beatable,” said San Miguel head coach Leo Austria in his first win since his return from a seven-game absence after sitting out due to health and safety protocols.

June Mar Fajardo also dominated inside for the Beermen with 21 points, 16 rebounds, and 3 blocks, while Simon Enciso bounced back with 16 points, 7 assists, and 4 rebounds after going scoreless in the second game.

CJ Perez added 17 points, 5 assists, 4 rebounds, and 2 steals for San Miguel, which overcame a 14-point deficit in the first quarter.

The Dragons had their seven-game winning streak snapped despite getting contributions from their usual suspects.

Andrew Nicholson starred in the loss with 34 points, 13 rebounds, 3 steals, and 2 blocks, while Zhu Songwei put up 17 points, 7 rebounds, and 6 assists.

Bay Area, though, severely missed the presence of Zhu and guard Glen Yang in the dying moments as they both left the game in the crucial stretch.

Yang fouled out with 40 seconds remaining and Zhu suffered an apparent ankle injury during the possession where Enciso nailed the game-winning triple.