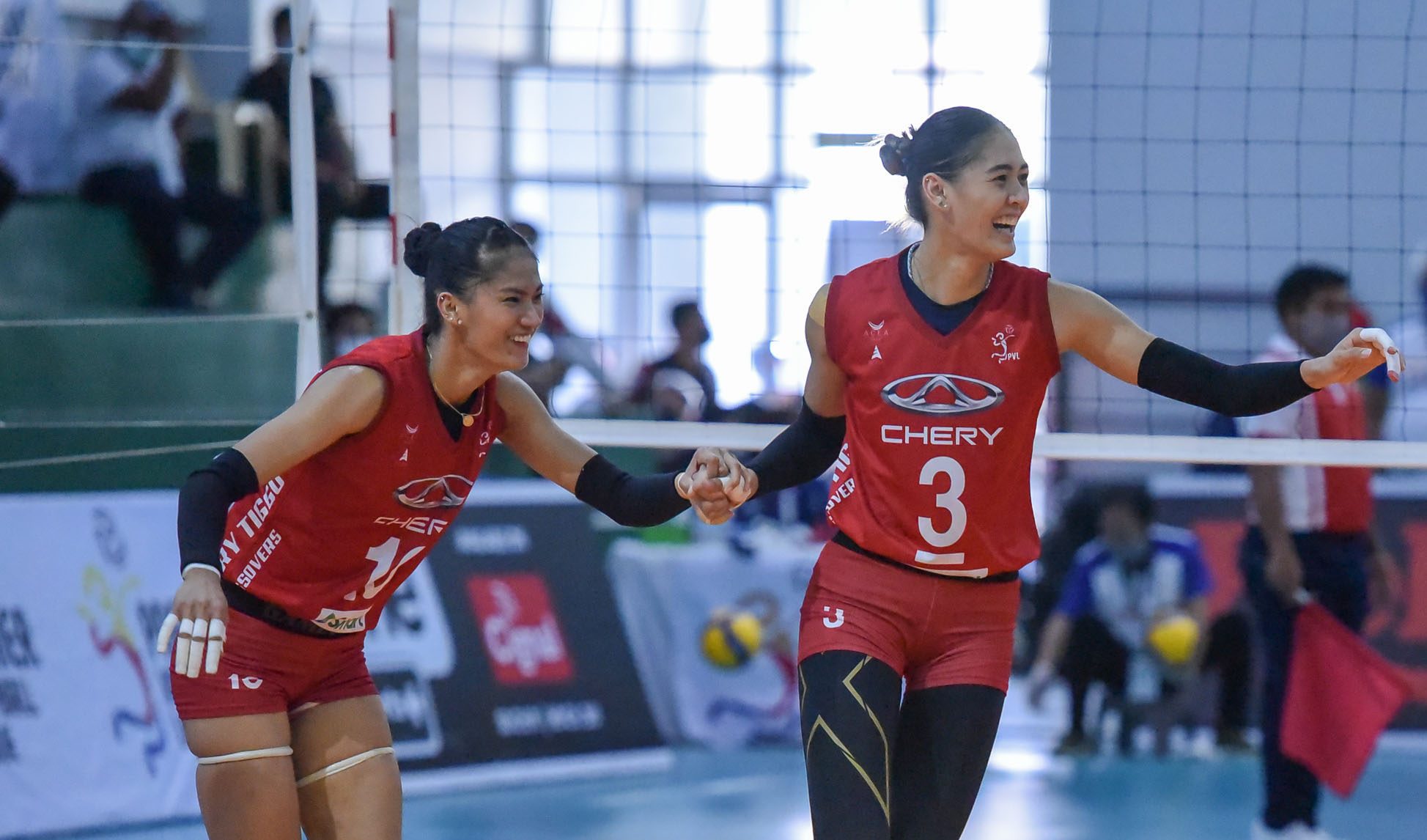 Facebook Twitter Copy URL
Copied
Against all odds, Chery Tiggo storms back from two sets down behind sisters Jaja Santiago and Dindin Santiago-Manabat to deny Creamline a PVL title three-peat

The reign of the winningest Premier Volleyball League (PVL) franchise is over.

Dindin Santiago-Manabat put up an all-time performance of 32 points off 30 attacks, a block, and an ace to deny Creamline a conference title three-peat.

Her younger sister Jaja also stood tall, literally and figuratively, and added 26 markers off 22 spikes and 4 blocks to win both the conference and finals MVP awards.

Despite a gritty third-set win to stay alive, the Crossovers’ drive looked dead in the water for good after going down 7-13 in the fourth set.

However, Chery Tiggo rose all the way back with an improbable 11-5 run to tie the set up, 18-all, and eventually led, 21-20, off the Jaja kill. Risa Sato managed to lift Creamline to another tie, 23-all, before the Santiago sisters alternated kills to force a fifth and final set.

This two-set comeback seemingly drained the life out of the Cool Smashers as the Crossovers zoomed ahead to a massive 7-1 lead in the decider, highlighted by three quick errors from super scorer Tots Carlos.

Creamline only got as near as 5 points, 6-11, before Chery Tiggo completed the masterful comeback for good after an emphatic Jaja kill for the championship.

Even in the face of a historic win, head coach Aaron Velez chose to deflect credit from himself and his team.

“I want to congratulate also Creamline. You know that they have the experience in this kind of level, but thank God, we really offer this to God, and He guided us, and we showed what we are made of,” he said.

“There’s nothing impossible with God. We just have to trust ourselves, trust one another, and trust God.”

Carlos led the heartbreaking loss with 22 points off 15 attacks, 5 blocks, and 2 aces, while Alyssa Valdez added 17 markers off 15 spikes.

Former conference MVP Jema Galanza put it all on the line as well with a massive triple-double line of 14 points, 30 excellent receptions, and 20 excellent digs, while longtime Best Setter Jia Morado pumped out 47 excellent sets in the losing effort. – Rappler.com