[ANALYSIS] Why Cebu is historically renowned as anti-Marcos country There is this myth spread by loyalists of the late dictator Ferdinand Marcos Sr. that opposition to the Marcos dictatorship was limited to a loud minority in Metro Manila.

Yet Cebu, like many other parts of the country, was an epicenter of protests during the dark years of dictatorial rule. An important center of trade, education, and media in the Visayas-Mindanao regions, Cebu is historically renowned as anti-Marcos country.

When Marcos declared martial law, prominent Cebuanos were among the 70,000 people arrested in the first few months of the dictatorship.

Democrito Barcenas, then Carcar town vice mayor and opposition leader during the time, recounts his ordeal as one of the first political prisoners under military rule in his book-length collection of essays titled Never Again, published in 2019.

Cebu was the site of student activism and social unrest then brewing all over the country from the 1960s to the first years of the 1970s in response to the deepening crisis of a foreign-dominated, backward agrarian, import-dependent, export-oriented economy.

According to Meinrado Paredes, who was then a member of the Samahang Demokratiko ng Kabataan (SDK) in Cebu, activist organizations like SDK and the Kabataang Makabayan (KM) were active in Cebu universities and surrounding communities.

They organized students on issues like tuition hikes, better facilities, and repressive school policies, raising their political consciousness and enjoining them to partake in the plight of urban poor, workers, farmers, and other marginalized sectors.

The First Quarter Storm, the series of massive protests that opened the year 1970, saw Cebu and universities like the Cebu Institute of Technology (CIT), University of the Visayas, Southwestern University (SWU), University of San Carlos (USC), and the Colegio de San Jose Recoletos (CSJR) becoming hotbeds of activism.

The year 1970 was called “The Year of Protests” by Resil Mojares, then a budding university instructor and rookie journalist, who detailed the monthly explosions of youth-led protests in Cebu on a variety of issues in his reportage for The Freeman.

Response from authorities was often brutal, with protests at the CIT on October 22, 1970 resulting in the shooting by security forces of 17-year-old Ramon Doong. Another student, Edgar Ebesa, would also be shot dead in protests against tuition increases at the CSJR on March 1971.

But anti-Marcos sentiments in Cebu was also sustained from another quarter.

During the 1969 presidential elections, Sergio “Serging” Osmeña Jr., Cebu’s political kingpin, challenged Marcos to the presidency in a contest that many Cebuanos felt was won through massive cheating. In both 1969 and the 1971 senatorial and local elections, the Cebu electorate delivered overwhelmingly for the political opposition. The imposition of dictatorial rule effectively suppressed open resistance to Marcos’ concentration of wealth and power in the hands of his family and cronies.

Martial law repressed the mass media, Congress, and the Supreme Court, propagated anti-communist ideology, and curtailed the rights to criticize government, to organize, and protest.

The Osmeña-led opposition was crippled. Serging Osmeña was in the US recuperating from wounds he obtained from the Plaza Miranda bombing. Sergio “Serge” Osmeña III, perceived to be the political clan’s heir apparent, was arrested and only made a dramatic escape from Fort Bonifacio and into exile in the US in 1977.

Local politics was dominated by Marcos allies, the Gullases from the south and the Duranos from the north. Effective resistance was relegated to the Communist Party of the Philippines (CPP)-led underground armed movement based mainly in the countryside outside Cebu province.

The first years of relative silence in Cebu under Martial Law was broken by the time of the April 7, 1978 Interim National Assembly elections, which saw the opposition party Pusyon Bisaya sweeping 13 local assembly seats against the Marcos party, the Kilusang Bagong Lipunan (KBL).

Marcos organized the 1978 elections to help legitimize his rule amidst the crumbling economy and simmering unrest. Instead, this became the spark to further propagate anti-Marcos sentiments that had begun to surface in prior years.

In Cebu, the KBL’s slate, consisting some of the biggest names in local politics including Durano, Gullas, and Emilio “Lito” Osmeña, was wiped out in the opposition landslide. This event cemented Cebu’s reputation as a center of the anti-Marcos opposition.

Voices from the Regions: People Power beyond Manila 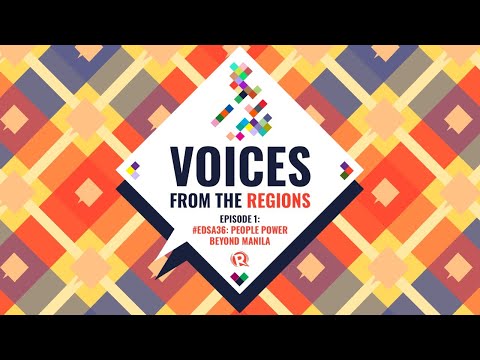 The protest movement in Cebu

Cebuanos would join the wave of open defiance which had begun to erupt nationwide.

The Cebu provincial formation of the League of Filipino Students (LFS) was founded in April 1979 and went on to form chapters at USC, SWU, St. Theresa’s College, and the UP Cebu College to mobilize students in the democratic reform movement for the restoration of student councils, student publications, and other student rights suppressed by the dictatorship.

In September 1980, Cebu’s first student boycott took place as 2,000 students at the USC protested tuition increases. This was followed by the violent dispersal of anti-tuition hike protests at the SWU that resulted in the shooting dead of student Bashir Majid.

Dr. Phoebe Zoe Sanchez, history professor at UP Cebu, recalls that there had been efforts by church groups like the Archdiocese of Cebu’s Share-and-Care Apostolate for Poor Settlers, the Visayas Secretariat for Social Action, United Church of Christ in the Philippines, and Visayas Ecumenical Movement for Justice and Peace to organize the urban poor for their rights amidst repression.

Informal settlers organizing against demolitions in Alaska, Mambaling, Barrio Luz, and the North Reclamation Area were at the core of the establishment of the urban poor association Panaghugpong sa mga Kabus nga taga Dakbayan (PANAGHUGPONG).

In a show of force against the dictatorship, 3,000 Cebuanos joined the Human Rights Day protest at Fuente Osmeña on December 10, 1979. The violent dispersal of the rally saw the arrest of Fr. Rudy Romano, one of the protest leaders who was only freed upon the intervention of the Free Legal Assistance Group’s Jose Diokno.

Fr. Romano would become a familiar face in Cebu’s protest movement as lead convenor of the Coalition Against People’s Persecution (CAPP) and the Nagkahiusang Sugbo Alang sa Demokrasya (NASUD), which would become the Cebu chapter of the Bagong Alyansang Makabayan (BAYAN).

From this point onward, protests and violent confrontations with the military would become a common feature in Cebu.

When Marcos announced national elections in 1981, the Cebu opposition stood behind Salvador Laurel’s boycott calls criticizing the said elections as a farce meant to deodorize the dictatorship.

The protest movement in Cebu intensified after the assassination of Ninoy Aquino in August 21, 1983, with weekly protests at Fuente Osmeña gathering crowds of up to 10,000 people.

An important turn took place on May 19, 1984 when protests against the results of the May 14 National Assembly elections turned into a pitched battle between stone-throwing protesters and fully-armed military forces in front of the Cebu Provincial Capitol, resulting in the death of one protester.

The following years saw multi-sectoral group BAYAN initiating several “welgang bayan,” which combined protest rallies, barricades in chokepoints in the city, and paralization of the economy and transportation.

The dictator Marcos responded to the wave of anti-dictatorship protests with violence and crackdowns on critics and activists. One of the most spectactular cases involved the abduction of Fr. Romano by suspected military agents on July 11, 1985. He has not been surfaced to the present. People Power and beyond

Marcos held another election in 1986 to manufacture approval for his regime in the face of the people’s mounting anger, which subsequently exploded in the EDSA People Power uprising that overthrew the dictator.

On February 22, 1986, thousands of Cebuanos joined Corazon Aquino in an indignation rally at Fuente Osmeña against Marcos’ rigging of the snap elections. She was given refuge at the Carmelite Monastery, where she spent the night to avoid Marcos’ military agents, before returning to Manila the next day.

While many politicians in Cebu have lined up their political machineries behind the son of the late dicator, the 150,000-strong April 21 2022 people’s rally of candidates Leni Robredo and running mate Kiko Pangilinan shows that the embers of anti-Marcos sentiments continue to run deep in this vote-rich province.

From Lapu-Lapu repelling the first European colonizers, Leon Kilat launching the Tres de Abril uprising against Spanish rule, Vicente Sotto using the pen to expose American colonial abuses, up to the Cebuanos standing against the Marcos dictatorship — history shows how it has always been in the fight against tyranny that the Cebuanos emerge in their finest. – Rappler.com

Karlo Mikhail Mongaya is a faculty member of the Departamento ng Filipino at Panitikan ng Pilipinas, University of the Philippines Diliman, where he teaches PS 21, UP’s General Education subject on Martial Law. He is from Cebu City.