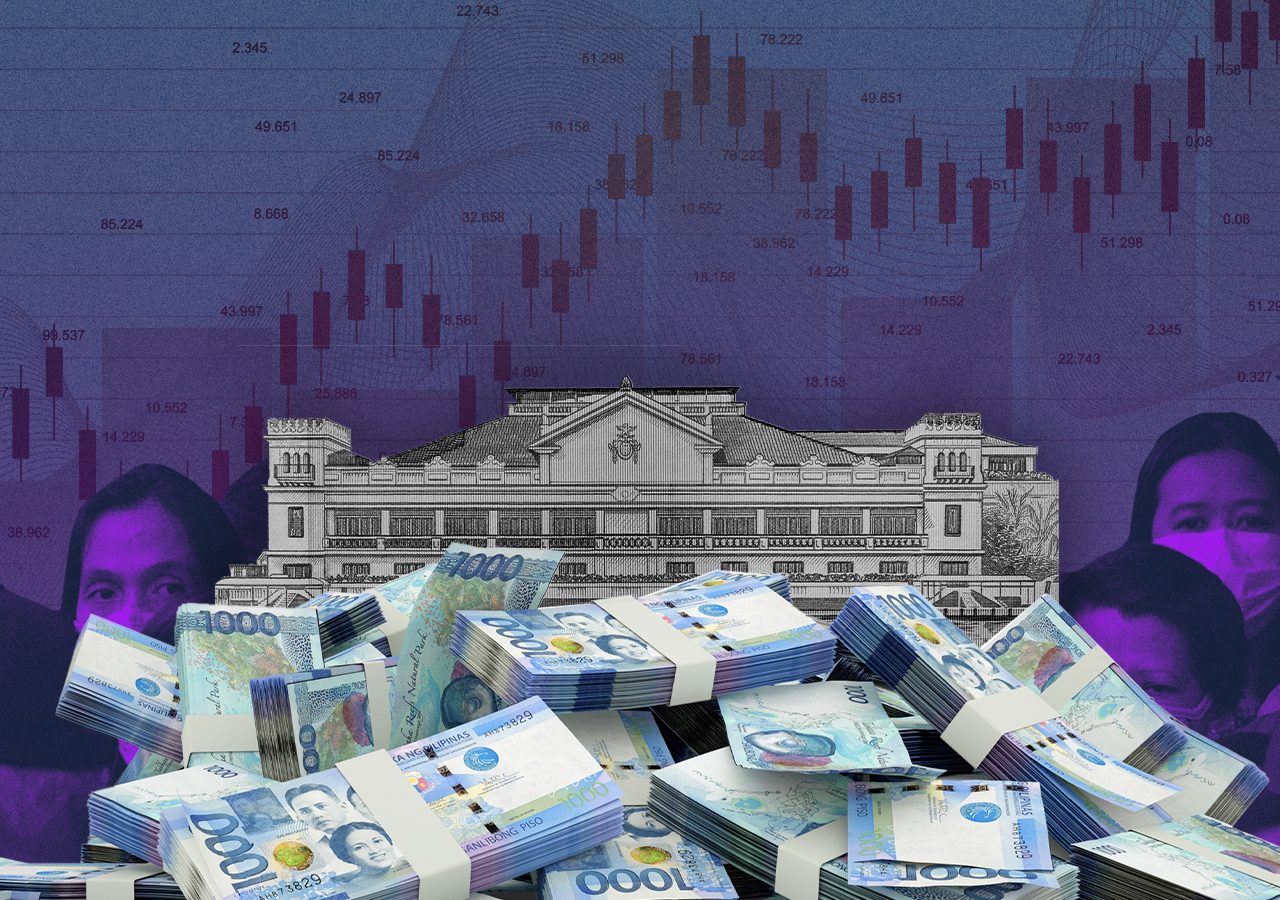 Facebook Twitter Copy URL
Copied
If the economists in government are just playing the political game, at what cost to themselves – and the nation?

A few weeks ago, I wrote about how the Maharlika Investment Fund – ostensibly a sovereign wealth fund, and allegedly the brainchild of President Ferdinand Marcos Jr. – poses a real threat to the independence of the Bangko Sentral, the Philippines’ central bank.

But there’s another aspect to the Maharlika fund that is not talked about so much (or talked about in hushed tones): how it called into question the integrity of some economists serving in government.

At the beginning of his term, Marcos Jr. was especially proud of the top-notch economic team he was able to form (albeit belatedly). This team comprises former professors and deans of the University of the Philippines School of Economics (UPSE). They also happen to be longtime technocrats who served previous administrations in other capacities.

In fact, after his first 100 days in office, the formation of such economic team was still one of the “accomplishments” Marcos Jr. was most proud of.

The economic careers of these technocrats are quite stellar. They earned doctorates here and abroad, published hundreds of publications between them, and earned solid reputations as public economists, development economists, and health economists.

However, the railroading of the Maharlika Investment Fund exposed just how powerfully politics can trump economics.

For instance, Representative Stella Quimbo, a PhD economist who specialized in health economics at UPSE, was one of the original six proponents of the Maharlika Investment Fund. In fact, she was the proponent appearing most often before media to justify the fund. Her co-authors banked on her economics credentials to bolster the case for the bill.

In her first term as congresswoman, Quimbo was quite promising as an economist-legislator. In many instances, she served as a voice of reason in the Lower House, and she pushed for timely legislation during the pandemic (including the Bayanihan 3 bill). But many of my colleagues were deeply disappointed and couldn’t quite believe their ears that Stella would be advocating for Maharlika, an ill-timed and ill-conceived bill.

And then there were the economic managers of Marcos Jr.

By far the staunchest advocate of Maharlika in the economic team is Finance Secretary Benjamin Diokno, another PhD economist and former public economics professor at UPSE.

In his memo to the President requesting that the Maharlika bill be certified as urgent, Diokno said, “Surely, the MIF can be a catalyst in changing our country’s economic landscape, and will aid in propelling the Philippines towards reaching its maximum potential.” Empty words.

He also once claimed that the Bangko Sentral has “too much” ammunition in the form of international reserves.

Capriciously touching a country’s international reserves is a no-no in modern central banking, especially if it’s going to serve the purposes of the executive. It’s a violation of central bank independence. It’s also a violation of the law: the amended BSP Charter prohibits the Bangko Sentral from engaging in “development banking or financing” (Maharlika is being touted as another way to finance development projects such as infrastructure).

Diokno should know better, having been the previous Bangko Sentral governor under the Duterte administration.

Sure, Diokno is quite political, having served as budget secretary twice before (the most political post among the economic managers). However, he’s now exerting his influence over the other economic managers – a role previously played by Duterte’s finance secretary, Carlos Dominguez III.

For instance, Diokno’s protégé, Budget Secretary Amenah Pangandaman – who got a master in development economics from UPSE – is also all for Maharlika. She said, “We don’t have to be scared” of it. She also gave assurances that multilateral institutions were consulted about the creation of such “sovereign wealth fund.” Really?

Then on December 9, the economic managers, led by Diokno, collectively wrote a statement where they said they “strongly support” the creation of Maharlika “as a vehicle to move forward the Agenda for Prosperity and achieve the economic goals of the administration.”

This, even if the positions of the other economic managers – National Economic Development Authority Secretary (NEDA) Arsenio Balisacan and Bangko Sentral Governor Felipe Medalla, both former UPSE deans – were still quite ambiguous at the time (they had not yet given categorical statements of support for Maharlika).

It was not until December 14, or 17 days after Maharlika was first filed, and during his confirmation hearing with the Commission on Appointments, that NEDA Secretary Balisacan broke his silence on the issue. (He’s a former professor and dean of UPSE.)

At the outset, Balisacan tried to give a nuanced take on Maharlika, giving it the benefit of the doubt.

He said, “Laws that the Congress passed are good or bad depending on how you make it. Governance is key to that. The governance framework that you put into the law, it’s what makes it workable or not workable.”

He added, “If that fund could supplement the limited fiscal resources that we have, for example, it could be used to improve the attractiveness of PPP projects, particularly for critical areas like infrastructure. Then again, as pointed out by several observers, its potential depends so much on how we design the framework.”

But a few days later, on December 17, Balisacan leaned on the idea of Maharlika harder.

When asked by media if it is a good time to set up Maharlika, he said, “It’s always the right time…. The participation of funds like this as a vehicle for attracting resources is, I think, appropriate at this time.”

Then when asked if government ought to be focusing on other policies, such as poverty reduction, Balisacan said, “Solving poverty requires a lot of investments…. We’re trying to attract all forms of vehicles that we can tap, including funds like this.”

And on December 19, at the launch of NEDA’s new flagship document, the Philippine Development Plan (PDP) 2022-2028, Balisacan said he was okay with Maharlika so long as it supported “areas critical to our development as identified in the PDP as well as the sustainability of the fund.”

These statements are arguably more nuanced than those of other proponents. But they still don’t cure fundamental flaws of the bill, including the fact that the Marcos government currently does not have surplus funds to spare for a large-enough sovereign wealth fund.

More crucially, the governance issues Balisacan mentioned are at the heart of the arguments against Maharlika: What governance structure is there going to be? Are there enough guardrails?

For instance, the current bill says that the chairman of the board of the corporation managing Maharlika will be the finance secretary. Isn’t the finance secretary too political for such a post? How sure are we that the Maharlika’s investment decisions won’t be politicized? Recall what happened to Malaysia’s 1MDB.

At the outset he seemed to be against it. In an interview with Bloomberg on December 2, Medalla mentioned that what happened to Malaysia’s 1MDB is the “biggest risk.” He also acknowledged the “governance issue.” He added that if the Marcos government wishes to touch the Bangko Sentral’s dollar reserve, the central bank will have “less ammunition the next time there is international volatility that is related to the peso and the dollar.”

After this statement, Representative Joey Salceda, a supporter of Maharlika in the Lower House, said “BSP is being hypocritical” because it was BSP that introduced a bill pushing for a separate sovereign wealth fund.

Later on, Medalla softened his stance on the Maharlika bill which removed provisions implying that Bangko Sentral’s reserves will be touched (instead, only half of the BSP’s net profits – which are remitted to the national government by law as “dividends” – will go to Maharlika).

Medalla added that the BSP’s balance sheet is “strong enough” even if the remittance of their dividends for Maharlika means that they will invariably delay their task of building up their capital to the P200 billion mandated by the amended BSP Charter.

He said, “Given that our concerns in the central bank have been completely addressed and the criticism of the inclusion of the pension funds has been addressed as well, I support the passage of the bill.”

Of course, we have yet to see the final version of the law. The Senate is set to come up with its own version after the Lower House passed its bill on December 18. Let’s see if the BSP and its reserves are really off the hook now.

At any rate, the Maharlika bill remains a threat to the BSP’s independence, and the BSP’s leadership should defend such independence more – especially since there will be a changing of the guards this 2023, with Medalla stepping down.

Question is, who will be the new governor? Diokno? Someone else? Will that person defend the BSP’s independence or not?

If you only listen to the PhD economists in government backing Maharlika, you may get the wrong impression that the bill is probably sound.

But it’s not. Note that the vast majority of economists in the private sector and academe are in fact vehemently against Maharlika. The only ones supporting the bill are those in the economic team, and some economists in Congress.

In case you missed it, many economists (including myself and past NEDA secretaries) signed a statement against the Maharlika bill. In a nutshell, that statement said that the government has too much on its plate already to bother with a pretend sovereign wealth fund that will not accelerate economic development while at the same time undermine our institutions.

This makes it all the sadder that otherwise respected economists should back the proposal, putting their reputations on the line. I’d like to think that in their heart of hearts, they have much more reservations about Maharlika than they’re letting on – for the bill just makes no economic sense!

If they’re just playing the political game, at what cost to themselves – and the nation?

Initially, many feared that recruiting PhD economists will help “deodorize” the second Marcos presidency, in much the same way PhD economists deodorized the Marcos dictatorship during Martial Law. In the first six months of Marcos Jr. in office, those fears seem to have been validated. – Rappler.com

JC Punongbayan, PhD is an assistant professor at the UP School of Economics. His views are independent of his affiliations. Follow JC on Twitter (@jcpunongbayan) and Usapang Econ Podcast.