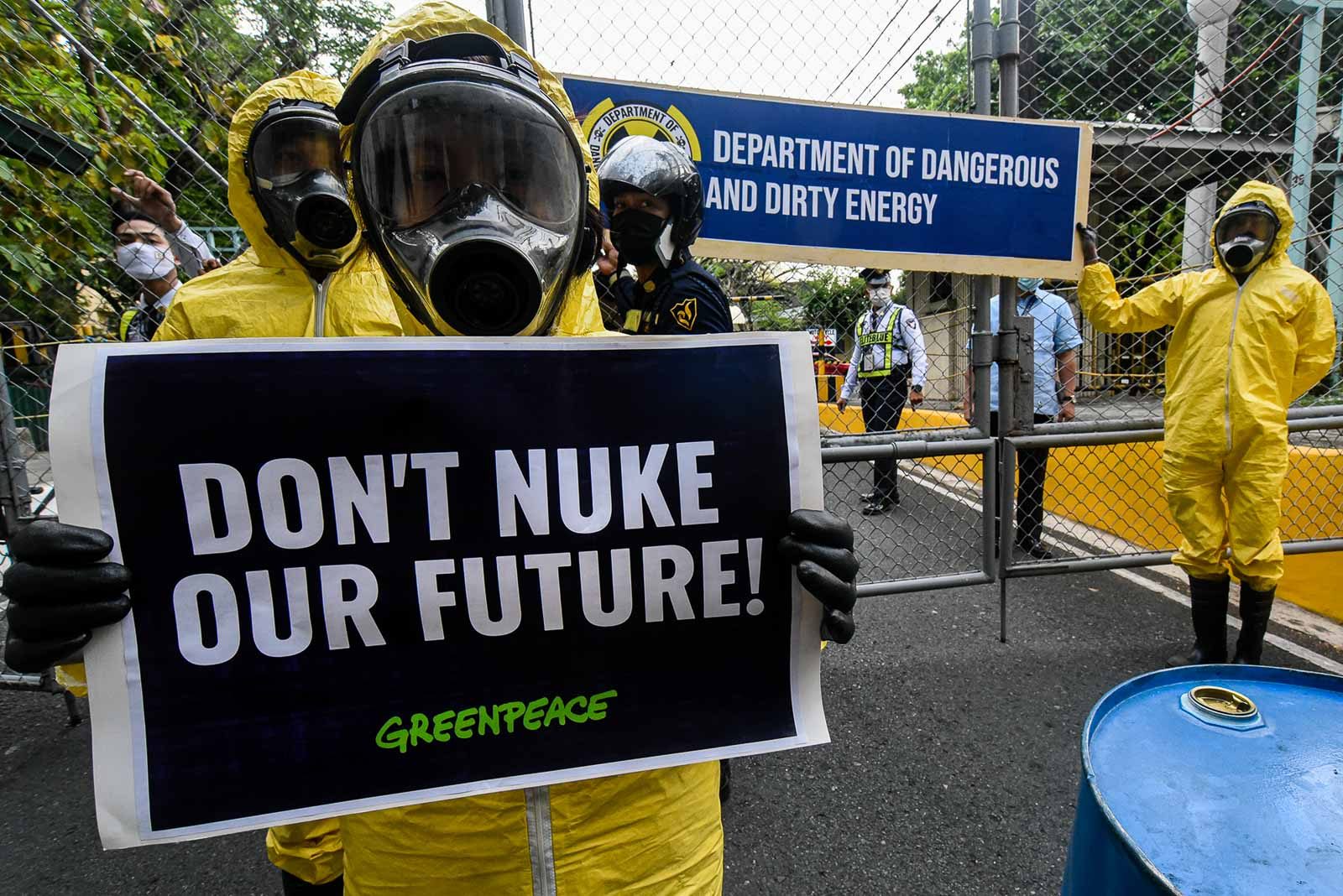 Commemorating the 11th year of the Fukushima Nuclear Plant disaster in Japan, Greenpeace Philippines stage a lightning protest at the Department of Energy in Taguig City on March 11, 2022. The environment activists also called on the government to stop promoting nuclear energy and called on President Duterte to recall EO 164. Angie de Silva/Rappler

Facebook Twitter Copy URL
Copied
Do we really want to store nuclear waste on one of our Philippine islands?

The following is the 35th in a series of excerpts from Kelvin Rodolfo’s ongoing book project “Tilting at the Monster of Morong: Forays Against the Bataan Nuclear Power Plant and Global Nuclear Energy.“

For the people who want to activate the Bataan Nuclear Power Plant (BNPP), the only future that matters are the 40-plus years it would operate. They couldn’t care less about what might happen afterwards to its lethal, radioactive wastes.  But I do, very much.

To all of us, geological events lasting seconds like earthquakes, hours like tsunamis, months like volcanic eruptions, or years like El Niños are important. But in a geologist’s world, events lasting millions or billions of years are also hugely important, and the familiar short-term events are mere punctuations.

In that super slow-motion view, Earth evolves in a strikingly organic manner.  After decades of studying and teaching Earth science I have come, like Lewis Thomas, Lynn Margulis, and James Lovelock before me, to regard Earth as one living planet-sized cell.

Of course, ancient peoples sensed this.  To the ancient Greeks she was Mother Earth, the goddess Gaia or Gaea – from which Germans coined the word “geologie.”

Regarding Earth along with all her living things as a single living being enhances loving concern for her and her future.  I will share this “Gaian” perspective thoroughly in my next forays.

Can Humanity overcome its own destructive instincts and survive through the time its nuclear wastes remain toxic, a period twice longer than its occupancy of Southeast Asia?

We were all born; so must we all die. So, also, must Humanity, like every species, inevitably go extinct sooner or later. We hasten the end of our own species by combining technological skills with cruelty such as enabled Hiroshima and Nagasaki, and the mad rush to nuclear power that makes lethal wastes we can’t store safely.  Also, with our runaway population growth, sociopathic greed, and environmental indifference that propel climate change from extravagantly burning fossil fuels.

But global Life is extremely adaptable!  It has already survived five Great Extinctions, and before that, a Great Oxygenation Event that killed off the first simple “procaryote” cells that made too much oxygen, and were too primitive to handle it.  Life is opportunistic; more sophisticated “eucaryote” cells and more complex forms, including us, arose that not only tolerate, but require oxygen, as we will see in a later foray.

Some forms surely will survive the man-made (“Anthropocene”) Extinction now underway.  Earth scientists worry about the environment we bequeath to its future life – with or without humanity.

Reactor-waste Plutonium has long been a security concern.  After about 300 years in storage, radiation levels will have dropped enough for the wastes to be handled directly, making it easy to steal in order to recover the plutonium.

But that concern is only the beginning! Per Peterson, a nuclear engineer at the University of California in Berkeley, says, “National boundaries may shift over the next few hundred millennia in areas containing repositories. During such unstable periods fissile materials in repositories may be vulnerable to…nations using military force. Likewise, with instability subnational groups may have easier access to repository sites….”

Beyond these military concerns, permanent storage would pose very serious threats to global life beyond humanity and its successors for much, much longer.

In 1996, Bowman and Venneri, nuclear scientists at Los Alamos National Laboratory, described how “natural or unnatural processes” underground could mobilize even small packages of nuclear wastes into critical masses that spontaneously fission:

“…such supercritical excursions could range from modest energy releases to the several hundred gigajoules from a single event. [This would be like exploding several tens of tons of TNT.]  Without water, 50-100 kg of fissile material is required to reach … criticality. Amounts as small as 2 kg…with water present. In varying degrees, all categories of waste containing fissile actinide appear to be susceptible to these criticality excursions…”

Bowman and Venneri also described how the plutonium in nuclear waste can become weapons-grade simply by sitting in storage.

Plutonium 239 has a half-life of 24,100 years and is useful for weapons.  The Plutonium 240 half-life is “only” 6,520 years, so it isn’t safe for weapons because it fissions spontaneously too often.

“Half-life?”  You may want to look at or revisit Foray 23, which discusses it at length. To recap, every atom of a particular radioactive isotope has a definite half-life, a specific length of time during which it has a 50-50 chance of either decaying or surviving.  In the case of Pu240 it is 6,420 years.  Atoms stay exactly the same as long as they survive; a lucky Pu240 atom may last billions of years, forever with a 50-50 chance of surviving another 6,420 years – until the instant it actually decays.

So. Let’s bury reactor waste containing a kilogram of plutonium: 530 grams of it is Pu 239, the red bars in the figure, together with 250 grams of Pu 240, the green bars.   After 6,420 years, half of the Pu240 atoms will have decayed and half, together weighing 125 grams, will remain. After another half-life of 6,520 years only half of that, 62.5 grams, will remain; after another half-life only about 31 grams will have survived…and so on.

Meanwhile, Pu239 decays at a much more leisurely pace. Before its first 24,100-year half-life, the Pu 240 will already have been halved almost four times.  UP-Diliman physicist Giovanni Tapang calculates that the plutonium waste will become 93% Pu 239–weapons-grade – in roughly 24,000 years, shortly before the PU 239 reaches its first half-life.

Natural self-regulating, cyclical systems evolved and lasted millions of years. Groundwater would transport Uranium to a site where enough would accumulate until it attained critical mass. This would generate heat that would eventually cause groundwater explosions, disrupting the system and breaking criticality. Then groundwater flow would resume, again bringing in and amassing more uranium to criticality, repeating the cycle.

The United States is so entrapped by nuclear power that 98 operating nuclear power reactors continue to accumulate spent fuel at 60 plants. They are increasingly vulnerable to natural disaster or terrorism while awaiting transfer to a permanent repository that may never come.

Does the distant American future include spontaneous nuclear reactors?

Do we really want to store nuclear waste on one of our Philippine islands?

Foray 36 begins our learning about Gaia, with a look at how our Sun heats Earth and her neighbors. – Rappler.com