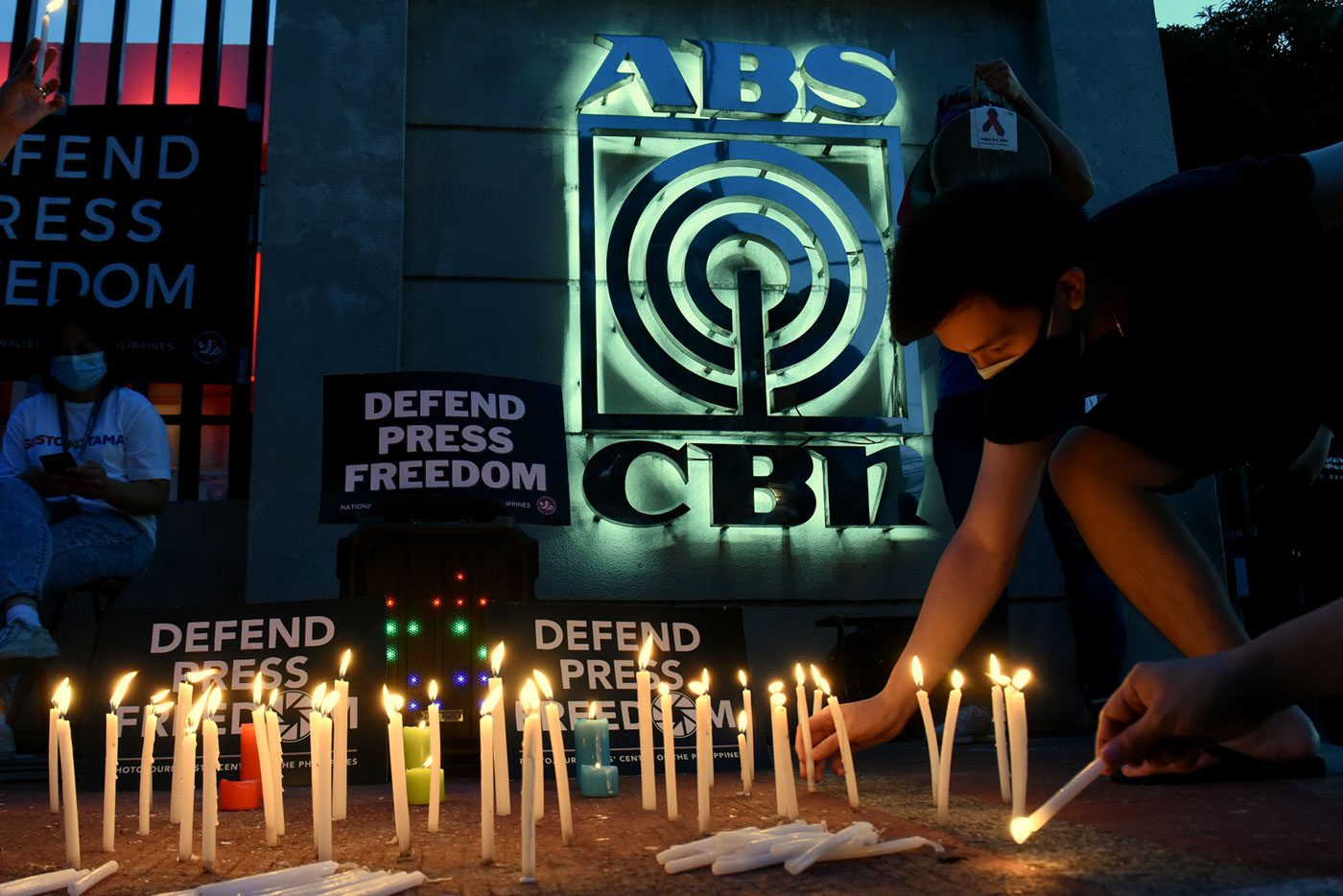 MANILA, Philippines – More than a year after ABS-CBN went off-air, the National Telecommunications Commission (NTC) decided it was time to move on.

The highly coveted television frequencies of the Lopez-led media giant had been left unused after its franchise renewal was rejected in 2020 and it was forced to shift to blocktime arrangements and online platforms.

Channel 2 and Channel 16, which were previously assigned to ABS-CBN, were awarded to Advanced Media Broadcasting System (AMBS).

AMBS was bought only in 2021 from the Vera family by Manny Villar, billionaire and ally of President Rodrigo Duterte. Both the House of Representatives and the Senate approved the sale in just one month.

Amcara Broadcasting Network’s Channel 23 and Channel 43, where ABS-CBN used to air its programs as a blocktimer, were distributed to Aliw Broadcasting Corporation and to Pastor Apollo Quiboloy’s Sonshine Media Network International (SMNI), respectively. Quiboloy is an avid supporter of Duterte.

How did this happen? Here’s a rundown of the key developments leading up to the awarding of ABS-CBN’s frequencies to other media entities:

AMBS, still owned by the Vera family, applies on October 5, 2006, for a certificate of public convenience (CPC) to install, operate, and maintain a digital TV station in Metro Manila.

Duterte repeatedly attacks ABS-CBN and threatens to shut down the network. ABS-CBN’s franchise expires. Presidential Spokesperson Harry Roque says Malacañang will defer to the decision of the NTC if it would allow ABS-CBN to operate.

Justice Secretary Menardo Guevarra says “there is sufficient equitable basis to allow broadcast entities to continue operating while the bills for the renewal of their franchise remain pending with Congress.”

The NTC issues a cease and desist order against ABS-CBN to halt its free television and radio operations. It also orders the Lopez-led company to respond within 10 days on why its frequencies should not be recalled.

The network signs off after airing its primetime newscast TV Patrol.

ABS-CBN maintains its assigned frequencies should not be recalled and asks the NTC to await the conclusion of the legislative process on its franchise application.

The NTC issues another cease and desist order against ABS-CBN for airing over Channel 43.

The House committee on legislative franchises rejects the bills seeking to grant ABS-CBN a new franchise.

The NTC recalls ABS-CBN’s frequencies and revokes related CPCs. The regulator cites the network’s inability to have its franchise renewed.

“Absent a valid legislative franchise, the recall of frequencies assigned to the respondent is warranted,” says the NTC.

AMBS’ 103.5 KLite lays off staff and DJs, after suffering from the impact of the coronavirus pandemic.

Duterte attacks ABS-CBN during his final State of the Nation Address. He says he wants to give the network’s frequencies to somebody else.

“They still want that frequency because ‘yan ang pinag-aawayan (that’s what people are fighting over). I will give it to a Filipino na gustong mag-gawa ng tama (who wants to do the right thing) and will pay,” the President says.

Romblon Representative Eleandro Madrona of the Villar-led Nacionalista Party files House Concurrent Resolution (HCR) No. 20, which seeks congressional approval for the sale of a controlling stake in AMBS to Villar’s Planet Cable.

The House of Representatives adopts HCR 21, the substitute bill for HCR 20, allowing the sale of AMBS to Planet Cable.

The NTC writes to the Department of Information and Communications Technology (DICT), seeking its guidance on continuing the implementation of digital terrestrial television broadcasting or DTTB, given that the recalled ABS-CBN frequencies are unused.

The NTC cites restrictions under Memorandum Circular (MC) No. 07-12-2014, which is the government’s migration plan from analog TV to digital TV. It zeroes in on these provisions:

Under the MC, the regulator also mentions that TV operators are required to simulcast their analog and digital TV services during the transition period. This is why ABS-CBN had analog Channel 2 and digital Channel 16.

Because of this rule, the NTC says it cannot reassign channels under the ultra-high frequency or UHF TV band for new digital TV applications.

Poe asks Santiago, “So, news?” Santiago answers, “Could be news, yeah. But more of still music, which is the core mission of the station.”

The DICT sends its reply to the NTC’s request for guidance, signed by Secretary Gregorio Honasan II.

The DICT essentially says that the limitations under NTC MC 07-12-2014 were only put there for simulcasting purposes over legacy analog.

“Certain restrictions were…provided in NTC MC 07-12-2014 owing to the limited radio frequencies on account of simulcasting requirements. Please note, however, that the rationale for the prohibitions and restrictions under MC 07-12-2014 would not apply at present due to the current existence of radio frequencies for DTTB transmission that are not being utilized albeit available,” Honasan says.

“In that regard, it is well within the NTC’s primary mandate to manage the radio spectrum of the country as a scarce resource that must be effectively and efficiently used by entities that the NTC finds to be legally, technically, and financially qualified.”

The Department of Justice (DOJ) sends the NTC its legal opinion, affirming the regulator’s power to grant entities a certificate of public convenience and necessity (CPCN) and provisional authority (PA) to operate.

“After due consideration and consultation with your office, the department finds that the questioned actions are permissible under the prevailing circumstances,” the DOJ tells the NTC.

The DOJ also notes that granting applications for digital TV “ceased to be exclusive to those with existing authority to operate.”

The Office of the Executive Secretary does not object to the NTC issuing a CPCN or PA to use the available frequencies.

The NTC grants AMBS, Aliw, and SMNI their respective PAs to operate the frequencies previously assigned to and used by ABS-CBN.

The NTC confirms to media the granting of the PAs.

The regulator says AMBS, Aliw, and SMNI passed the legal, technical, and financial evaluation. It also says these media firms were the first three to apply for digital TV operations, and have been waiting for available frequencies for years – since 2006 for AMBS and since 2007 for Aliw and SMNI.

Both Justice Secretary Guevarra and Cabinet Secretary Karlo Nograles say the NTC did not mention any name or company when it sought legal opinions to reallocate the frequencies.

Media groups and advocates criticize the awarding of frequencies to the Villar group, with some pointing out that the tycoon’s daughter, Las Piñas City Representative Camille Villar, voted against renewing ABS-CBN’s franchise in 2020. Villar’s son, former public works secretary Mark Villar, is running for the Senate under the Duterte coalition.

House Deputy Minority Leader and Bayan Muna Representative Carlos Zarate claims that the awarding of frequencies was “Duterte’s payback” to allies. Senator Francis Pangilinan, meanwhile, calls on the NTC to be more transparent about its selection process. – Rappler.com