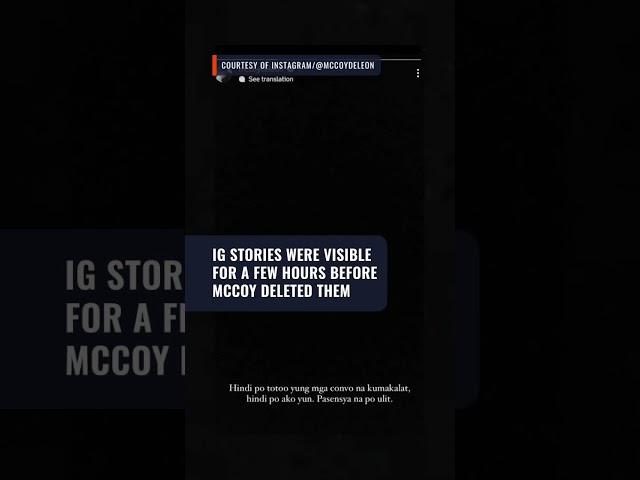 Facebook Twitter Copy URL
Copied
McCoy also pens a letter to their daughter Felize, asking her to understand him if he gets the chance to tell her his side of the story in the future

MANILA, Philippines – After weeks of speculation, McCoy de Leon has confirmed that he is no longer in a relationship with partner Elisse Joson, adding that no third party was involved in the breakup.

In a series of Instagram Story updates on late Wednesday, January 4, the actor apologized to the people who were hurt and affected by their current situation. “Sorry po, pasensiya na po sa inyong lahat (I’m sorry, I apologize to all of you),” he said.

De Leon then addressed the alleged private conversations between him and another woman that has circulated on social media, clarifying that those weren’t true and that he was not behind those messages. He also insisted that no other person was behind their fallout.

(A third party is not the main reason for our breakup. Please believe me. It wasn’t my intention to hurt others or to cheat. It just reached the point where the problem was already too heavy so I gave up.)

The Instagram Story updates were publicly visible for several hours before De Leon deleted them. As of writing, the posts are no longer available on the actor’s profile, but screenshots have already circulated on social media.

Hours prior to his confirmation, De Leon also penned an open letter to Felize Mckenzie, his daughter with Elisse. The photo was first uploaded on December 19, 2022, but the actor updated the caption on Wednesday.

In his message, De Leon hoped that his child would not look at him differently when she grows up, and that she would understand him if he gets the chance to tell her his side in the future.

The actor also implied that he had not seen his child for a while and that he had no means to reach her. “Pasensiya na rin kung dito ko nailagay message ko. Hindi ko alam paano kita makakausap eh,” he said. (I’m sorry that I left my message here. I don’t know how I can talk to you.)

Hours after penning the open letter, De Leon again edited the caption of his post on Instagram. Only the line, “Lagi mong tatandaan na mahal na mahal kita (Always remember that I love you so much)” was left.

Speculations about his split with Joson surfaced in December 2022 when netizens noticed that the two have not been posting photos of each other on their respective accounts, particularly during the holidays. Some netizens also accused De Leon of cheating on the actress when a photo of him looking cozy with a TikTok influencer made rounds on social media.

Joson had yet to address their split.

De Leon, 27, and Joson, 26, met when they became part of Pinoy Big Brother: Lucky 7 back in 2016. After their PBB stint, they were paired as a love team and starred in television series FPJ’s Ang Probinsyano, The Good Son, and film Sakaling Maging Tayo. t

In 2018, they announced their breakup, but confirmed they were back together in June 2021. In November 2021, they announced that they have a child, Felize McKenzie, whom they welcomed in April 2021. – Rappler.com