MANILA, Philippines – As a trailblazer of the idol group concept in the Philippines, the quintet SB19 is by far the most celebrated Pinoy pop or P-pop group of their generation. Since their debut in 2018, they have released hits like “MAPA,” “Go Up,” and “Hanggang sa Huli” that broke music chart records.

SB19 is a product of the idol group concept that can be traced back to the Korean and Japanese pop industries. K- and J-pop popularized the formation of groups composed of idols undergoing intense training for their dancing, singing, and rapping skills before they can debut.

In the case of SB19, they were formed by ShowBT Philippines, a subsidiary of the South Korean company ShowBT. In the company, members Pablo, Josh, Stell, Ken, and Justin underwent three years of training before conquering the Philippine stages as SB19.

Since their debut, they have also catapulted P-pop into the international scene as a nominee for the Billboard Music Awards (BBMAs), making them the first ever Filipinos to be recognized at the awards.

They are now taking over music charts and breaking records left and right for the P-pop industry – but it has not always been that way.

Going up with ‘Go Up’

For any aspiring idol or celebrity, to debut is the dream. It’s when they finally move out of the training rooms and into the performance stages where they will be met by blinding spotlights and deafening screams from the fans.

But that was not always the case for SB19. The first year of their debut was met with faint support, which disheartened the members. “Kasi nag-debut kami. We felt it, and we were very proud of it,” Josh told CNN Life. “Pero alam mo ’yun, ’yung reality na ’pag pumupunta ka ng mga event, hindi ka naman talaga sinusubaybayan ng maraming tao.”

(We debuted already. We felt it, and we were very proud of it. But you know how it is, it is a reality that whenever we go to events, not a lot of people are looking forward to seeing us.)

Online activity surrounding SB19 was also proving stagnant. Rappler analyzed the group’s followings on their official Facebook and Instagram accounts using data from CrowdTangle, a social media listening tool used by journalists. We scanned their followers and likes starting May 10, 2018, the date their Facebook page was created, until August 3, 2022. Data showed that the group didn’t really have a significant online following – that is, until “Go Up.”

On the night of September 2, 2019, their “Go Up” dance practice went viral on Twitter after a fan posted it, and their lives have changed since. Likes and follows across all their social media accounts spiked and have been steeply increasing since.

Rappler also conducted a keyword scan to analyze posts and tweets that mentioned the group. Between January 1, 2018 to July 31, 2022, we gathered approximately 100,000 Facebook posts and tweets mentioning SB19.

On Facebook, there was a prominent spike in the number of mentions when the video went viral in September 2019. On Twitter, the group’s mentions kept spiking even until January 2020, when they were promoting “Alab,” the third single from their debut album.

Spikes in mentions on Twitter also occur whenever SB19’s fans aim to win awards or hype up their idols. There was also another notable peak in March 2021 when the Stan World account (@stanworld_twt), which allows different fandoms to vote for and promote their favorite celebrities online, hosted a voting party on the social media platform.

Following the “Go Up” dance practice hype, SB19’s fans, collectively known as A’TIN, also skyrocketed in number as the group became more and more popular. While SB19 started out relying on self-promotions for their albums and songs, now they have a wide variety of fan pages, fellow artists, and individuals who are more than happy to support the group online.

In our analysis, we grouped together the Facebook pages mentioning SB19 and categorized them as fan pages, media outlets, personal accounts, or pages for brands or products. Pages that did not fall into any of these categories, such as religious groups, government organizations, and dedicated meme pages were classified as “others.” We found that before “Go Up” went viral, only the official SB19 Facebook page and a few media outlets were talking about their activities.

After “Go Up,” mentions of SB19 on Facebook were dominated by fan pages, which posted 79.3% of SB19-related posts. Individual fans made up 2.26% of Facebook posts about the group.

We also analyzed frequently used words in posts and tweets mentioning SB19 to get a look into the different ways fans promote the group. About 25% of the mentions on Facebook and 44.74% on Twitter are composed of posts encouraging A’TIN to stream the group’s songs and music videos, as well as to vote for them for various awards. Most of these contain links to other social media platforms, such as Youtube and Twitter, to update the fandom on new SB19 content.

Zooming out of the Philippines, SB19 won the hearts of many fans around the globe. We found that approximately 20% of international fans who post about SB19 on Facebook come from the United States, followed by Canada (9.5%), Singapore (8.4%), Australia (7%), and the United Arab Emirates (7%). (READ: A’TIN International: Meet the foreign fans of P-pop sensation SB19)

Charles Kim, ShowBT Philippines chief executive director, had even told CNN Philippines that SB19 was “ready for world domination.” SB19 made history when they became the first Filipino act to make it to the Billboard Next Big Sound charts, as well as the first P-pop group to be nominated for Top Social Artist in the 2021 BBMAs along with household names BTS, Ariana Grande, and BLACKPINK. 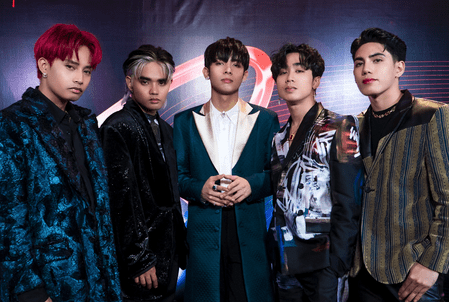 Foreign A’TIN also have something to look forward to as SB19 is set to go on an international tour which kicks off with shows in the Philippines before the group flies off to the United States, the United Arab Emirates, and Singapore.

The P-pop industry grew in popularity since the idol group concept became mainstream. A Twitter scan of P-pop mentions starting 2018 shows that there were higher spikes in mentions around 2020 and 2021.

SB19, being a senior in the P-pop industry, is still the most mentioned group alongside the #PPOP hashtag on Twitter. They were mentioned in 46% of the tweets since “Go Up” had gone viral. SB19 also shares the P-pop spotlight with groups like MNL48, who debuted in 2016, and newer ones like BINI, who debuted in 2020, and BGYO in 2021.

Earlier this year, P-pop idol groups came together to perform in the Tugatog Filipino Music Festival 2022 to showcase just how rich and talented the industry is.

“It’s not just any kind of pop anymore, P-pop is really embracing our roots and heritage for the contemporary audience,” Ant Savvy Creatives Executive Strategy and Communications Officer Anj Heruela said. “We are not just inspired by their craft, but also how they inspire other people, young and old, through their music and stories of training and hard work to reach their current status as P-pop idols now.”

With P-pop popping up, these Pinoy idol groups are definitely taking us fans for a ride – and we’re buckling our seatbelts and getting ready to go wherever the music leads us! – with reports from Dylan Salcedo/Rappler.com