Marvin and Jolens? Rico and Claudine? A Gen-Z’s guide to ‘90s loveteams Facebook Twitter Copy URL
Copied
Get to know the on-screen couples that paved the way for the likes of KathNiel, AlDub, and DonBelle

MANILA, Philippines – We all know that love teams are a Pinoy showbiz staple, and while recent history has seen the rise of love teams like KathNiel, LizQuen, JaDine, AlDub, and, more recently, DonBelle, one might argue that the true golden age for love teams was in the ‘90s.

Back then – as this writer is unfortunately old enough to remember – it seemed that every big star was paired with another equally big star, and they did everything together. As a pair, they top-billed practically every teleserye and film that hit the screen, went on every talk show to coyly tease an off-screen romance, and beamed at each other from every other billboard.

It was arguably the on-screen couples from the ‘90s that whet the Filipino appetite for love teams, and set the stage for more recent pairings to win people’s hearts and catch the attention of the rest of the world.

If you’re too young to remember further back than DonBelle, AlDub, or even John Lloyd Cruz and Bea Alonzo, here’s a guide to introduce you to the ‘90s love teams that paved the way for them.

But first…what are love teams?

In case you didn’t know yet, love teams are when two artistas are paired together for practically all of their public activities, with the backing of a major network.

According to film critic and professor Richard Bolisay in a 2019 paper on the JaDine fandom, the love team is a concept that’s “unique to Philippine entertainment not just because of their intense popularity among mass audiences but also because of their rich cultural history spanning decades since the beginning of Philippine cinema.”

That is to say, love teams have been around for quite a while now. There was Pancho Magalona and Tita Duran in the ‘40s and ‘50s, Nora Aunor and Tirso Cruz III – also known as Guy and Pip – in the ’60s and ‘70s, and Sharon Cuneta and Gabby Concepcion in the ‘80s.

Often, love teams are formed organically. The actors might take small roles on the same show, or star opposite each other in the same music video (like JaDine).

Some might even come together purely by chance, as in the case of AlDub, when the camera caught Maine Mendoza giddily breaking character over Alden Richards on Eat Bulaga’s “Kalyeserye” segment.

When two equally attractive stars display such powerful chemistry right off the bat, audiences can’t help but respond to it, and this makes the pairing bankable to the big networks and studios.

“This is how love teams in Philippine entertainment have prospered and endured. Production studios manufacture them for profit, making them appear in all sorts of media and accessible for public consumption,” Richard writes.

Today, newer love teams are noticeably fewer, and artistas seem to have more freedom when it comes to who their co-stars are, in that they don’t necessarily always have to be with their love team partner.

For instance, we’ve seen Kathryn Bernardo (of KathNiel) successfully play the leading lady of Alden Richards (of AlDub) in 2019’s Hello, Love, Goodbye – which made a killing at the box-office, by the way.

Some iconic love teams of recent history have also effectively ended their on-screen pairing, with the actors involved even swearing off love teams altogether – for instance, Nadine Lustre.

It might feel like the power of love teams is beginning to wane (though the fan group putting up billboards of DonBelle all over the world might beg to disagree).

In the ‘90s though, it was a different story.

Back then, it seemed that practically everyone in showbiz in the ‘90s was in a love team – from fledgling artistas to pop singers to box office royalty.

Maybe only a handful of those love teams made it to icon status, and they’re the ones you should remember (especially because some of them seem poised to make their love team comeback soon). These are they:

Few love teams embody the giddiness of puppy love the way Marvin and Jolens did. They were first paired together in 1996 on the teen show Gimik, where they played characters Joey and Ese as part of an ensemble cast. They would be coupled on-screen yet again as supporting characters in the primetime teleserye Esperanza, and went on to star in the rom-com series that took over Esperanza’s timeslot, Labs Ko Si Babe.

They also took over the big screen, starring in films like Flames: The Movie, Kung Ayaw Mo Huwag Mo, and the immortal Ricky Lee-penned Labs Kita Okey Ka Lang, where Jolens delivers that iconic speech about falling in love with her best FRIEND. 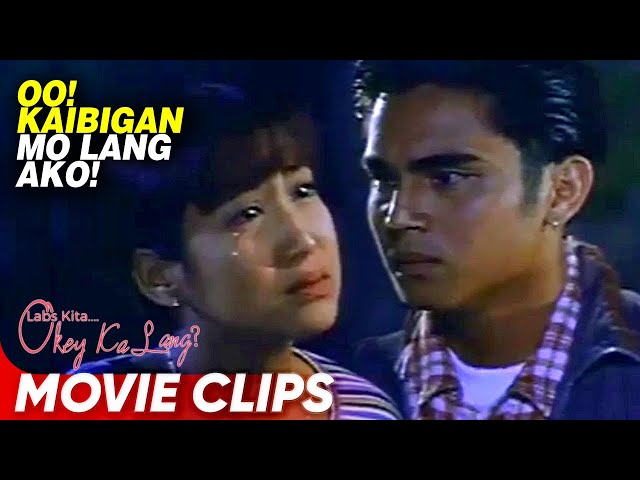 Today, Marvin and Jolens remain good friends and still even call each other “labtim.” Jolina is married to Rivermaya’s Mark Escueta, with whom she shares two kids, and Marvin is a dad to twins from his ex Tetet Dy. In 2019, Marvin and Jolens attended the ABS-CBN ball together and even started working on a reunion film.

Before James Reid and Nadine Lustre made “Team Real” a thing, there was Claudine Barretto and Rico Yan, whose on-screen chemistry gave way to real-life romance. Rico had previously been matched with Judy Ann Santos, but was paired with Claudine in the 1996 films Radio Romance and Madrasta. However, it was the teleserye Mula Sa Puso (1997 to 1999), that really cemented their status as the ’90s love team du jour. In the show, Claudine plays Via, who gets entangled in a love triangle with her childhood friend Michael (played by Diether Ocampo), and Gabriel (Rico), the boy who rescues her from a kidnapping. 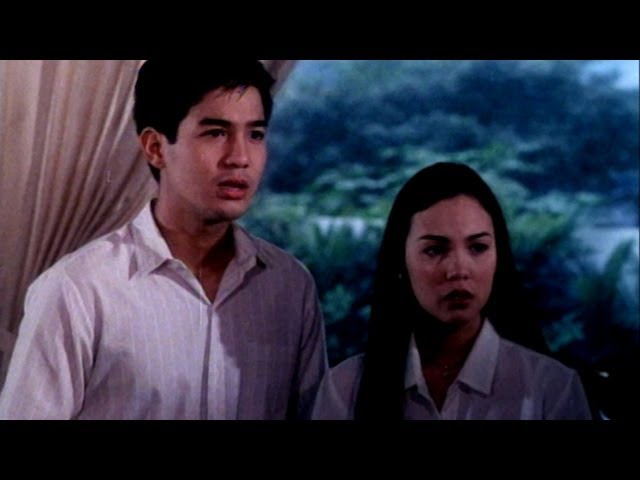 After Mula sa Puso, Rico and Claudine starred opposite each other in films like FLAMES: The Movie, Dahil Mahal na Mahal Kita, and the hit 2002 rom-com Got 2 Believe, while also maintaining a relationship IRL. Sadly, Got 2 Believe was Claudine’s last film with Rico – he tragically died at age 27 of hemorrhagic pancreatitis.

Claudine went on to become an award-winning actress and marry Raymart Santiago, from whom she eventually separated. She is now a mom to three kids: Sabina, Santino, and Quia. Until now, she still often posts touching tributes to Rico on his death or birth anniversaries.

A true ’90s relic, Bobby Andrews and Angelu de Leon made audiences swoon as the friends-to-more-than-friends couple Wacks and Peaches on the teen show TGIS in 1995 and its sequel, Growing Up in 1997.

The two continued to star in the romance drama Ikaw na Sana, as well as a slew of films together, including TGIS: The Movie, Laging Naroon Ka, and Wala Na Bang Pag-Ibig. 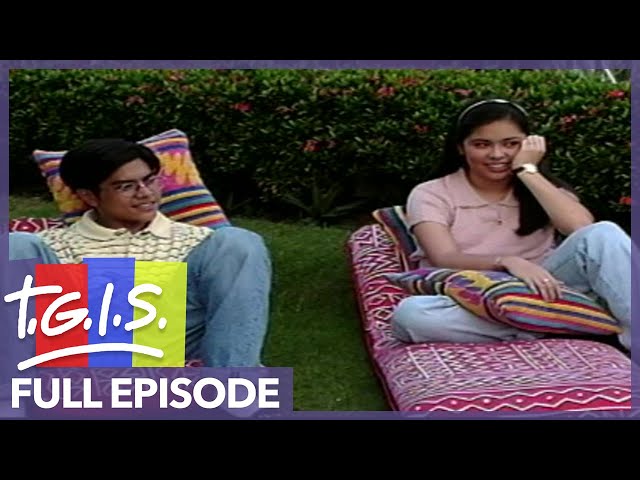 Angelu’s career took a detour when she became a mom at age 19, having a kid with ’90s action star Joko Diaz. After a quick pause and having another kid by businessman Jojo Manlongat, she returned to showbiz, starring in the shows May Bukas Pa, Sana Ay Ikaw na Nga, and Ang Lahat Ng Ito’y Para Sayo, again with Bobby.

While they eventually wound up on different paths in their careers, they reprised their roles as Wacks and Peaches in the 2012 show Teen Gen, a spin-off of TGIS.

Angelu recently admitted in a podcast that she and Bobby had been “more than friends, less than lovers,” and that they never really got into a relationship because they had an age gap.

John Lloyd Cruz would become one-half of “the greatest love team of all time” alongside Bea Alonzo, but before that, he cut his leading-man teeth with Kaye Abad in the teen shows Gimik and Tabing Ilog. They would go on to star together in several films, and Kaye even admitted decades later that John Lloyd was her first boyfriend and first love – which probably explains their explosive on-screen chemistry.

These days, Kaye is based in Cebu and is a mother of two boys with husband Paul Jake Castillo. After briefly taking a break from the limelight, she returned to the screen in the 2019 show Nang Ngumiti Ang Langit.

John Lloyd meanwhile would go on to be a prolific actor, starring in both mainstream and arthouse films. He went on a showbiz hiatus in 2017 and had a son with then-girlfriend Ellen Adarna. He has since returned to entertainment, signing with GMA Network. 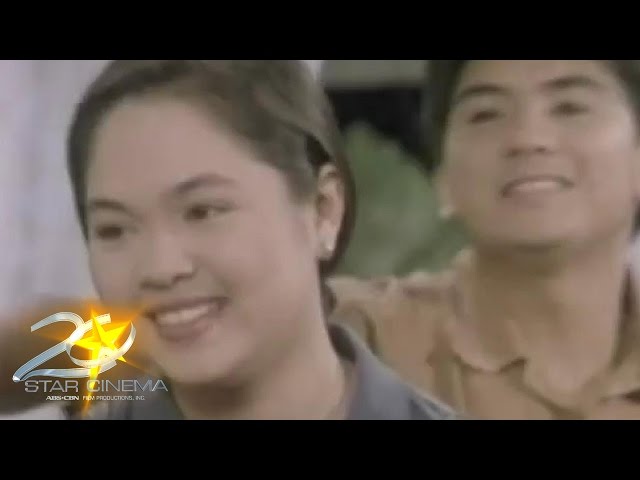 Then-rising star Judy Ann Santos and Universal Motion Dancers member Wowie de Guzman were paired together in Mara Clara – the iconic show that put Juday on the map. The two starred opposite each other throughout the show’s five-year run, and the sparks between them led to other projects, including the series Esperanza in 1997, and the films Paano Ang Puso Ko? and Muling Ibalik ang Tamis ng Pag-ibig.

Juday would later be paired with Piolo Pascual in the teleserye Sa Puso Ko Iingatan Ka, and carried on to be a film and TV star in her own right, starring in films like Kasal, Kasali, Kasalo, Aishite Imasu 1941: Mahal Kita, and Ouija, and Ploning. She is also a YouTube cooking sensation, and mom to three kids with husband Ryan Agoncillo.

Wowie continues to be a dancer, and teaches Zumba to Filipinos around the world. He is also a single dad, raising his daughter alone after being widowed in 2014. – Rappler.com