Facebook Twitter Copy URL
Copied
(1st UPDATE) Reelectionist Cavite Governor Jonvic Remulla handed out P1,000 bills to rally participants called on stage to sing or dance, but he says the Uniteam candidates were not yet around at the time 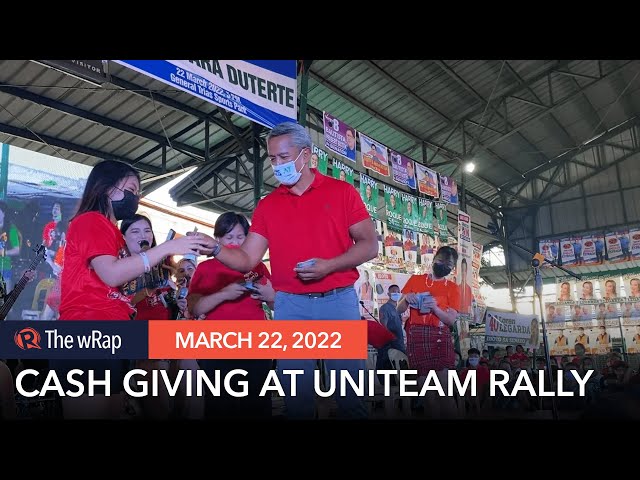 CAVITE, Philippines – Cavite Governor Jonvic Remulla gave out as much as P28,000 in thousand peso bills during a local sortie of Uniteam tandem Ferdinand “Bongbong” Marcos Jr and Sara Duterte on Tuesday, March 22, but he justified the act, saying that the incident happened before any candidate of the visiting ticket joined him on stage.

Remulla was at the covered court in Barangay San Juan, Dasmariñas – for an event that had been announced as a Uniteam sortie – when he called rally attendees on stage, asked them to sing or dance, and in the end gave nine participants either P1,000, P2,000, or P5,000. Some of those who received cash wore Marcos-Duterte shirts.

It’s raining cash in here in Uniteam Dasmariñas sortie. So far, Remulla has given out P28,000 in cold thousand peso bills to 9 audience members who either sing or dance. pic.twitter.com/qmmRvxjFMD

The Omnibus Election Code prohibits vote-buying, which is defined as “any person who gives, offers or promises money or anything of value…in order to induce anyone or the public in general to vote for or against any candidate.”

The governor, however, argued that the cash-giving doesn’t count as an election offense as Marcos and Duterte were not in the venue at the time. Remulla, who is running for reelection, also noted that he did not commit a campaign offense since the local campaigning period would begin only on March 25.

“My campaign starts on the 25th, walang Uniteam na kasama sa stage (there was no Uniteam on stage), therefore it was my event, not yet the Uniteam rally,” Remulla told reporters.

“Wala naman si BBM [Bongbong Marcos] doon eh. Ako pa lang ‘yun. (Marcos wasn’t there, it was only me.) It was just me. The presidential candidate, vice president, and senators were not there; it was only me. Not until the candidates arrived is it a violation,” he added.

The venue was filled with posters of Marcos and Duterte, as well as Uniteam senatorial bets. The event was also previously advised as a Uniteam sortie, and the extent that Remulla campaigned for the local elections was for his vice gubernatorial tandem, Athena Tolentino.

Election lawyer Emil Marañon disputed Remulla’s interpretation of the law, and told Rappler that the text of Section 261 of the Omnibus Election Code “is very clear.”

“To commit vote buying, the vote-buyer need not be a ‘candidate’ as the law says ‘any person,” Marañon said.

“Second, the presence or even knowledge of the candidate benefitting from the act is also not an element of the crime. In other words, [Marcos] need not be there for Remulla to commit vote buying for him,” Marañon added.

Gov Jonvic Remulla defends the giving out of cash in a Uniteam sortie: Hindi pa ako kandidato until 25, BBM was not there. Not until the candidates (for national) arrive is it a violation.

Former Commission on Elections (Comelec) Commissioner Luie Guia said, “If one is giving money to voters to induce them to vote for or against a candidate, not necessarily the giver, then that is clearly vote buying under Section 261 (a) of the Omnibus Election Code.”

Asked about the issue on Tuesday, Comelec Commissioner George Garcia said the poll body is careful in handling vote-buying allegations, since election aspirants can invoke the Penera doctrine, which refers to a 2009 Supreme Court ruling which ultimately nullified prohibitions on premature campaigning.

This means candidates are not covered by campaigning guidelines until the campaign period begins.

But the Comelec said it will form an interagency task force to better handle complaints.

“The Comelec can motu proprio investigate, direct its field personnel to submit a report. But we will create a task force to speed up our actions,” Garcia said.

The Remullas are backing Marcos and Duterte in vote-rich Cavite, the province with the second highest number of votes up for grabs, or 2.3 million. Marcos defeated Vice President Leni Robredo here in the 2016 vice presidential elections with a margin of 152,544.

Remulla’s brother, Cavite 7th District Congressman Boying Remulla, had earlier accused the Robredo rally attendees of being “hakot” or paid to attend, but did not provide any proof to back his claim. Since then, “Hindi kami bayad (We’re not paid)” has become a regular crowd chant in Robredo-Pangilinan rallies.

Marcos and Duterte were scheduled to attend two more events in Tagaytay before the grand rally in General Trias, in the same venue of Robredo’s huge rally.

The Marcos-Duterte rally coincided with a special non-working holiday in Cavite. Malacañang on March 8 declared Marcg 22 a holiday in Cavite for the birth anniversary of former president Emilio Aguinaldo. – With a report from Dwight de Leon/Rappler.com