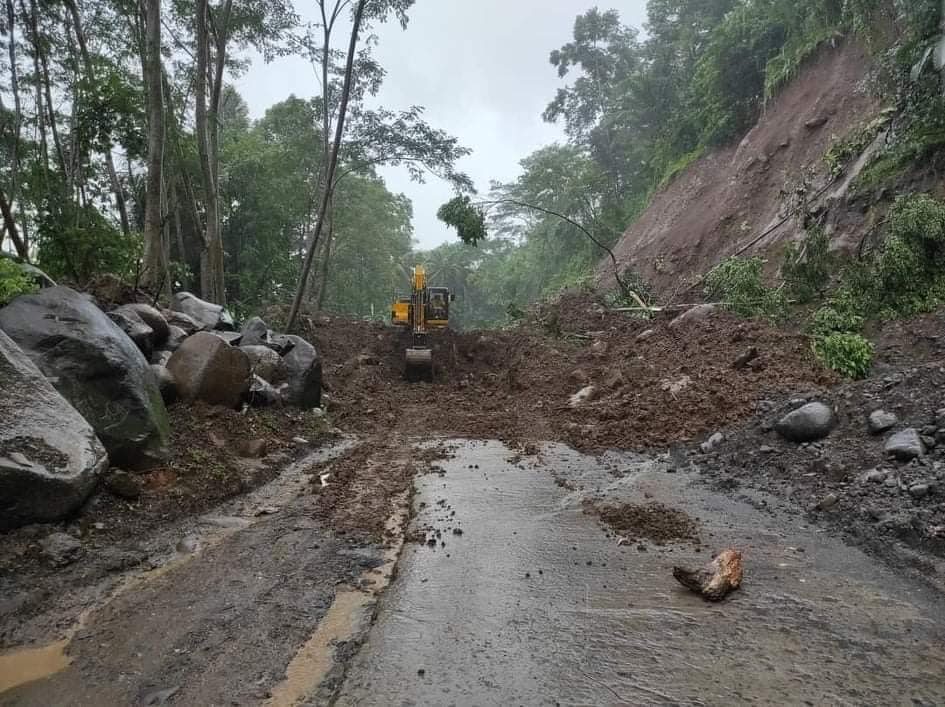 LANDSLIDE. Workers use heavy equipment for a road clearing operation following a landslide in Misamis Oriental as a result of the onslaught of Typhoon Odette.

BUKIDNON, Philippines – Typhoon Odette also left a trail of destruction on agriculture in Northern Mindanao with Misamis Oriental province reporting the most damage during its first two landfalls in the neighboring Caraga region on December 16.

The Department of Agriculture (DA) placed the initial damage to Northern Mindanao’s agriculture at P67.7 million with Misamis Oriental farmers suffering the most in the region.

Misamis Oriental’s component city of El Salvador, along with the towns of Claveria and Balingasag were the hardest hit.

The town of Cabanglasan in neighboring Bukidnon province also saw banana, corn, rice, and vegetable farms destroyed during the onslaught of Odette.

The typhoon also damaged agriculture in the towns of Jimenez and Bonifacio in Misamis Occidental, and the provinces of Lanao del Norte and Camiguin Island – all in northern Mindanao.

DA director for Northern Mindanao Carleen Collado said the damage assessment is ongoing and there could be more.

“The amount is only an estimate. We need to thoroughly check the actual amount and hand out the appropriate assistance to affected farmers,” Collado told Rappler.

Collado said the DA regional office has buffer stocks of rice, corn, and vegetable seeds that would be given to the farmers in areas adversely affected by the typhoon.

The DA said the typhoon also delayed shipments of hogs from Caraga to Luzon. Some 3,728 heads, for instance, had to be rerouted to Cagayan de Oro City right after Odette struck because port operations in Caraga were crippled.

In Bukidnon, officials said Odette displaced some 5,428 families in nine farming towns in the province. They said the typhoon also destroyed many houses and damaged infrastructure in Bukidnon.

Before Christmas Day, the government distributed farm implements, hybrid corn seeds, fertilizers, herbicides, and livestock to 118 small farmers in the villages of Mandahican and Canangaan in Cabanglasan town in Bukidnon.

Cabanglasan Mayor Renante Inocando said the farmers in the two villages would also benefit from a P12.5-million multipurpose drying pavement and warehouse. – Rappler.com