Robredo red-tagged in streamers on eve of Leyte visit 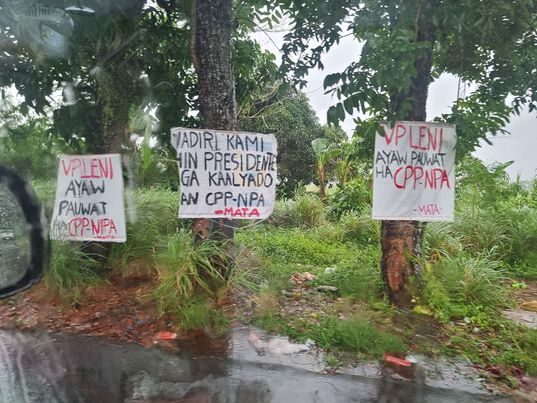 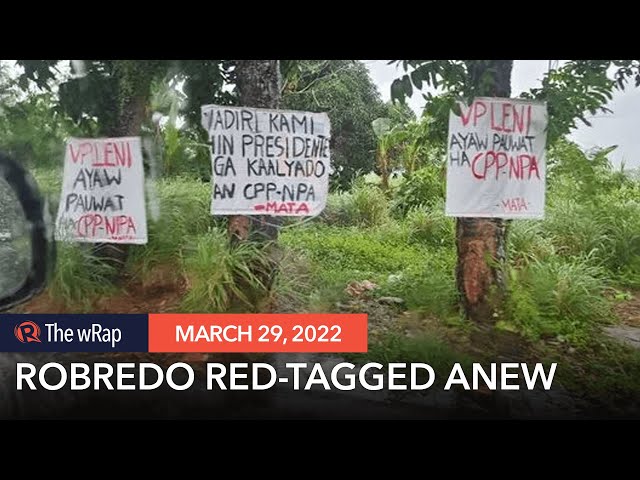 TACLOBAN, Philippines – At least 50 streamers red-tagging presidential candidate and Vice President Leni Robredo were placed on trees and posts surrounding the Government Center in Palo, Leyte on Monday morning, March 28, a day before her campaign sortie in the province.

The streamers linked Robredo to the Communist Party of the Philippines (CPP), the National Democratic Front (NDF), and the New People’s Army (NPA), alleging the opposition candidate is in an alliance with the insurgents.

They also urged Robredo not to be “tricked” by the armed communist movement.

Officials of the National Task Force to End Local Communist Armed Conflict (NTF-ELCAC) and supporters of President Rodrigo Duterte and Robredo’s presidential race rival, Ferdinand Marcos Jr., have stepped up attacks against the vice president during the 2022 elections campaign.

Robredo is holding a rally on Tuesday, March 29, in Palo town and Ormoc City in Leyte as part of her three-day campaign visit to the Eastern Visayas region.

In an interview with Rappler, a barangay official who took photos of the incident said the posters were taken down in the afternoon after local supporters of the Vice President complained to security guards.

“Why is this how they campaign against a candidate? This is baseless. No court of the Republic of the Philippines has ruled that ma’am Leni is part of the NPA,” the official who asked not to be named said in a mix of Waray and Tagalog.

FALSE: Robredo is a member of CPP-NPA-NDF While posters attacking her were taken down, some that link progressive party list groups and opposition candidates to the Communist Party of the Philippines can still be seen along the roads of this city and other Leyte towns.

“’Kakampinks’ also asked the security guards to remove posters near MacArthur Park and the road leading to San Jose but were told the areas were not under their jurisdiction,” the official said.

He added that he did not want to personally take the posters down out of the fear of being red-tagged.

Kabataan Eastern Visayas denounced the red-tagging attacks on Robredo as well as member-groups of the Makabayan bloc.

“This is a clear case of electioneering by the incumbent administration and its allies in order to sow fear and discord among the ranks of the broad united opposition,” Kabataan Eastern Visayas said in a statement, pointing out that the incident is not an isolated case.

It also renewed the call to abolish the government’s anti-communist task force.

“The desperation of the administration is seen in its efforts to try to discredit the opposition and to enable violence against it by red-tagging them,” the party’s statement said. “Its rabid nature has reached the point where it red-tags and endangers even the lives of democratically-elected representatives, and the vice president herself which is why there is no redeeming factor which can be seen to preserve this abomination of a task force.”

The Robredo camp had debunked the red-tagging, and her supporters had cited the fact that retired military and police general, including their former chiefs, have endorsed her candidacy. – Rappler.com