CEBU CITY, Philippines – Major streets in Cebu City turned blue and yellow on Saturday, April 2, as the Osmeñas pulled all stops to host one of their own, their vice presidential bet and Senate President Vicente Sotto III.

After attending mass at the Cebu Metropolitan Cathedral, the Osmeñas and Sotto headed for the Cebu City Sports Center, where supporters came from as far as the mountainous barangays of the city.

For the Bando Osmeña Pundok Kauswagan (BOPK), one of Cebu City’s major parties and formed by former mayor Tomas Osmeña, the sortie was the completion of its proclamation rallies for its top two national bets, weeks after declaring Leni Robredo as the party’s presidential candidate.

On Saturday evening, local bets of the BOPK, led by Osmeña’s wife Margot, shared the stage with Sotto. At the rally, where organizers said they expected 25,000 people to come and the famous Eat Bulaga crew entertained the audience, the party formalized its endorsement of Sotto.

For Sotto, it was a key stop in his campaign, hoping Cebuanos could help him get past the current vice presidential race frontrunner, Davao City Mayor Sara Duterte. Latest data from Pulse Asia showed Sotto polling at 24% against Duterte’s 53%.

In his pursuit of beating Duterte, Sotto needs to win Cebu, the most vote-rich province in the Philippines. This weekend, he came to Cebu without his standard-bearer, Senator Panfilo Lacson. This weekend, Cebu’s most well-known political dynasty launched the Le-Ti (Leni Robredo-Tito Sotto) campaign.

In an interview just before the program, reporters asked Sotto about what he felt about BOPK snubbing Lacson. He said he had no control over the them, adding that the rally on Saturday was mounted by the party and that he was only their guest.

Any Cebu City resident knows the name Vicente Sotto. Their biggest public hospital, which in fact services the entire Central Visayas, is named after Senate President Sotto’s grandfather, Vicente Yap Sotto, who in his lifetime served as councilor, congressman, and mayor of the city.

The late Vicente Sotto is known as the father of Cebuano journalism, and is a main proponent of Cebuano literature, being both a writer and a playwright. A monument stands along the city’s historic Colon Street in memory of him, and a separate street that branches off it is named after him.

His grandson, Vicente III, also excelled in the art of performance, making a name out of pioneering Philippine disco and eventually becoming everybody’s “Tito” (Uncle) across the country through the wildly popular noontime show, Eat Bulaga.

Sotto’s own popularity has given him an all-win record in the elections, starting as a vice mayor in Quezon City in 1988.

While Sotto grew up in Metro Manila, the Osmeñas unearthed a staple story in promoting him to Cebuanos. At every opportunity, mayoral candidate Margot Osmeña and other local officials would recall when Sotto once donated P5 million to Margot’s Kapwa Ko Mahal Ko foundation, which aimed to help children diagnosed with cancer.

“These are children. They weren’t even voters. Still, he helped us,” Margot told Rappler in an interview.

Robredo-Sotto: A vote for opposition

For the Osmeñas, Leni Robredo was the obvious choice for the presidency. Tommy has known Robredo for decades, meeting her through her husband, the late Naga City mayor Jesse Robredo. Margot is also the only female mayoral candidate in Cebu.

Tommy praised Robredo’s “on-the-ground” approach to leadership that shone in crises, recalling a recent example. When Typhoon Odette left Cebu in ruins in December 2021, Robredo was among the first national official to fly in to check on the area.

When Tommy hosted Robredro, she asked how she could go to the farthest residents instead of staying in the city.

Tommy also wanted to endorse his friend Manny Pacquiao, but, he pointed out, “Leni has a bigger chance.”

“Manny is the nicest person I know in government,” Tommy said, but he did not trust the people who surrounded the boxing champ-turned-senator. 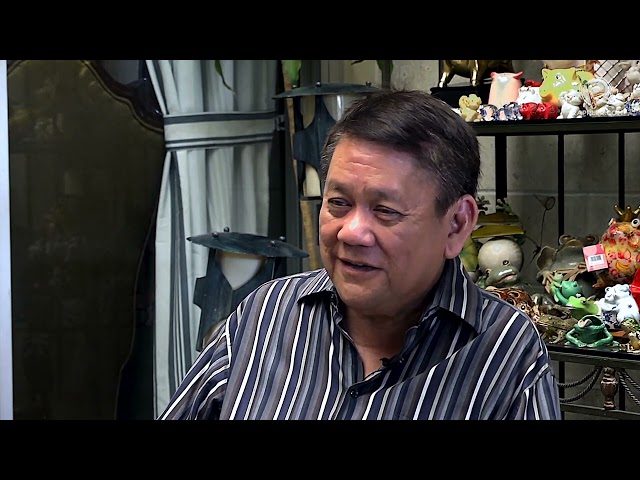 Second, the Osmeñas again wanted to place their bets on a candidate with a fighting chance.

While Duterte already enjoyed a dominating lead over Sotto, her numbers further dwarfed Pangilinan’s, who only polled at 11% in the same Pulse Asia survey.

Going for Robredo-Sotto was also the BOPK’s rejection vote of the Marcos-Duterte ticket. For Tommy Osmeña, the latter two were simply incompetent. He made a swipe at Marcos for failing to get a degree, while attacking Sara Duterte for Davao City getting outshone by Iloilo.

Marcos and Duterte were endorsed by Partido Barug-PDP Laban, the same forces that handed Tommy Osmeña his loss of the mayoralty in 2019.

Can the Osmeñas and Sotto deliver an upset on May 9? – Rappler.com