Court: No record of Marcos complying with tax judgment The QC RTC Branch 105 has no record of compliance of payment for Bongbong Marcos in his 1997 tax conviction.

Facebook Twitter Copy URL
Copied
(2nd UPDATE) It is an issue of two kinds of payment. Did Marcos pay both? His spokesperson says 'I will not supply the missing facts to petitioners.' 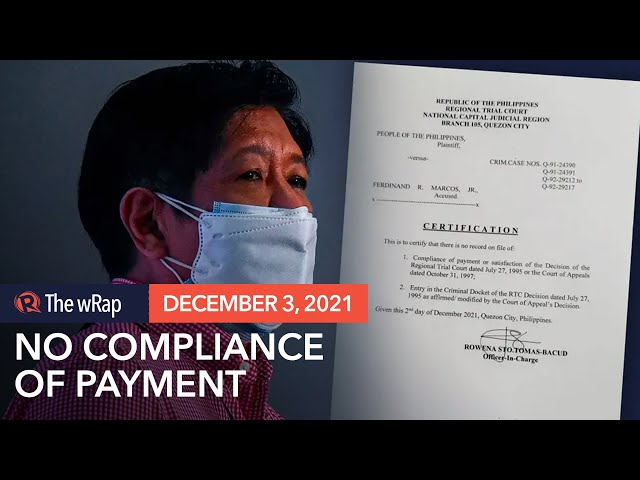 There is no record in the lower court of presidential aspirant Ferdinand “Bongbong” Marcos Jr’s “compliance of payment” as ordered by the Court of Appeals in 1997 when he was convicted of failure to file income tax returns (ITRs).

“This is to certify that there is no record on file of compliance of payment or satisfaction of the decision of the regional trial court dated July 27, 1995 or the Court of Appeals dated October 31, 1997,” said a certification by the Quezon City Regional Trial Court Branch 105, as secured by petitioners seeking to cancel Marcos’ certificate of candidacy or COC.

The certification was signed Thursday, December 2.

Petitioners’ counsel Ted Te said they will bring this information to the Commission on Elections (Comelec) which is currently in the process of accepting answers and responses in the petition, an extended period before resolution that Te has opposed for allegedly being a unilateral decision of the Second Division.

Te said “the certification simply cements what we have already said in the petition. The respondent has been convicted and the sentence remains unserved.”

How this new information will play into the legal arguments in the Comelec petition is unclear, but it sheds light on a previously-unknown tax conviction of Marcos amid his supporters’ narrative that none in the Marcos family had been found guilty of any crime. 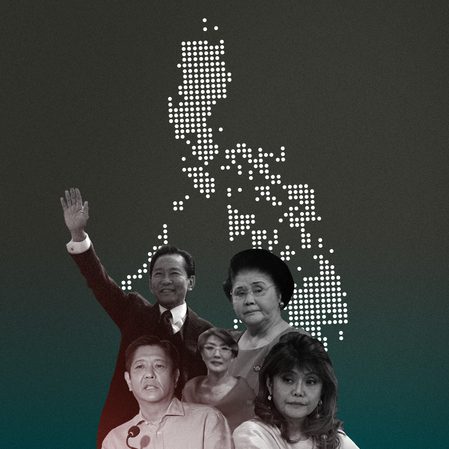 What it means for Comelec petitions

The facts are as follows: the Quezon City RTC convicted Marcos in 1995, a ruling which the Court of Appeals (CA) modified in 1997, acquitting him of tax evasion, but convicting him for his failure to file ITRs from 1982 to 1985.

Answering in intervention was his party, Partido Federal ng Pilipinas (PFP), which told the Comelec that Marcos paid the second item – the fines – in 2001, or 20 years ago, totaling P67,137.

How about the first item or the “deficiency income taxes”? Did Marcos pay that too?

PFP said in its answer to the Comelec that Marcos was “only meted a fine.”

In his own answer to the Comelec, filed on his behalf by veteran litigator Estelito Mendoza, Marcos said the CA’s first order “was unclear.”

“It does not specify the particular deficiency income tax which appellant is required to pay with interest at the rate until fully paid. What is clear is that defendant BBM is ordered to pay a fine,” said Mendoza’s answer for Marcos.

Pressed on Friday, December 3, whether Marcos paid the deficient tax on top of the fines, his spokesperson Vic Rodriguez said it would be improper to answer a substantive aspect of the case and that it is for petitioners to “do their diligence” in looking for those facts

“We will not supply them whatever is missing,” said Rodriguez.

This is relevant to the Comelec petitions in this way: the Omnibus Election Code says a person’s disqualification on the basis of a conviction is removed “after the expiration of a period of five years from his service of sentence.”

Is his sentence considered served once he had paid what the CA had told him to pay? If so, what was he required to pay?

“I would love to answer because I know fully well what the correct answer is, but again, the petitioners should have done a complete due diligence before they have done the filing of their cases,” said Rodriguez.

The QC court’s certification of no record of satisfactory compliance with the court’s judgment is a starting point of these debates.

It is the argument of petitioners, however, that the conviction alone had “perpetually disqualified” Marcos from public office.

But PFP said the perpetual disqualification provision of the tax code became effective only in January 1986, by way of PD 1994 passed into law by Bongbong’s father. The 1986 amendment, said PFP, would not cover the crimes from 1982 to 1985.

In his response, Marcos told the Comelec to take judicial notice of the fact that he had been elected to, and had served in, various government posts in the last 20 years as vice governor and governor in Ilocos Norte, a representative of the First District, and then senator.

A petition in intervention argues that there is an earlier case of a mayor who had already served, and had been allowed to run before by the Comelec, but whom the Supreme Court eventually disqualified because of a previous conviction. They argue that estoppel does not lie against the State, or that the present Comelec is not bound by the non-action of previous Comelec administrations.

There are now seven various petitions against Marcos in the Comelec, the latest being from former officials of PFP. 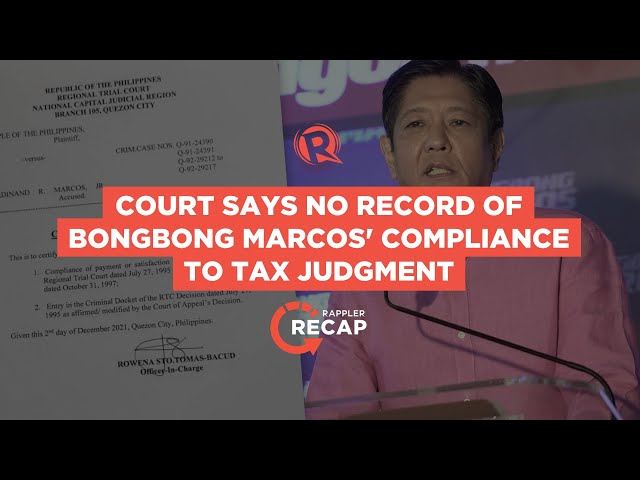