As Robredo and running mate Senator Kiko Pangilinan continue to campaign all over the country, the tandem and their slate decided to hold a series of campaign events in Nueva Ecija and “Aquino country” Tarlac. On Tuesday, March 22, Robredo set foot in Nueva Ecija, where she lost in 2016.

Just beside Barangay Ferdinand E. Marcos in San Jose City in Nueva Ecija, Robredo was welcomed by 6,000 “Kakampinks” at the Pag-asa Sports Complex, according to her campaign team. After her visit in the city, Robredo moved to Talavera town to meet members of local electric cooperatives.

During her meeting with the supporters, Robredo mentioned that electric cooperatives are close to her heart because her brother used to work in the electricity sector. According to Robredo, instead of dissolving electric cooperatives, they should be developed to respond to the country’s power supply problem.

In Talavera town, Nueva Ecija 1st District Representative Ging Suansing showed support for Robredo by wearing a pink shirt that says, “Dapat si Leni (It should be Leni).” A former staff of Suansing told Rappler that the lawmaker is supporting Robredo’s presidency.

Suansing used to be a member of President Rodrigo Duterte’s PDP-Laban, but the lawmaker later moved to the Nacionalista Party.

An estimated 50,000 people attended the grand rally for Robredo, Pangilinan, and their Senate candidates in Cabanatuan City.

A dance troupe from Bongabon, Nueva Ecija, dedicated what they called the “sibuyas (onion)” dance for Robredo. This is nod not only to the town’s image as the onion capital of the Philippines but also a tribute to the “Kakampinks'” self-reference as sibuyas – their response to the false allegations of supporters of a rival camp that drone shots of Robredo’s mammoth rallies used images of pink onionheads to fill spaces in rally grounds.

At the end of their routine, the dance troupe formed a big onion, from where Robredo appeared.

A dance troupe from Bongabon, Nueva Ecija, the onion capital of the Philippines, dedicates a dance routine for VP Leni Robredo. pic.twitter.com/JaGh9faf5m

In her speech, Robredo discussed her “resibos” (receipts) of helping Nueva Ecija even before declaring her candidacy. According to the Vice President, her programs in the country’s rice granary include water supplies for the farmers and medical aid for the province.

The opposition bet also told her supporters that the baseline in choosing who to vote for should be the projects of public servants prior to election season: “Ang sukatan ay kung anong ginawa ng kandidato noong wala pang eleksyon (The baseline should be what the candidates had done before the election season).”

Robredo also recalled her loss in the province in the 2016 vice presidential race in the province. Dictator’s son Ferdinand “Bongbong” Marcos Jr. won there with 541,672 votes, over Robredo’s 216,110. In response, the crowd cheered, “Babawi kami (We’ll make up for it).”

A dance troupe from Bongabon, Nueva Ecija, the onion capital of the Philippines, dedicates a dance routine for VP Leni Robredo. pic.twitter.com/JaGh9faf5m

In the first leg of her campaign in Tarlac, known as “Aquino country,” Robredo held a mini rally in Capas, where town Mayor Reynaldo Catacutan entertained the audience with his “unique” way of introducing the Vice President.

Capas Mayor Catacutan does his ‘unique’ way of introducing Robredo.

He says he did the same introduction during late ex-Pres. Noynoy Aquino’s campaign in their town in 2010. pic.twitter.com/WJKrmZkThv

Robredo also made a stop in Gerona town, and held mini rallies in the towns of Moncada and Santa Ignacia.

The relevance of Kris Aquino’s appearance

Actress Kris Aquino, the youngest sister of the late president Noynoy Aquino, surprised Robredo’s supporters when she suddenly appeared on stage during Robredo’s grand rally in Tarlac City, to show support for Robredo. She was accompanied by sons Josh and Bimby, while her older sisters were also at the rally.

Kris, who was recently diagnosed with erosive gastritis and gastric ulcer, took the risk of heading to the rally despite her health condition. “Ang umapak dito sa Tarlac ay worth the risk (Stepping foot in Tarlac is worth the risk),” she said.

Before she introduced Robredo, Kris shared that after her brother died, she discovered a letter written by the late president addressed to Robredo. She rephrased some of those lines and shared them with the audience. 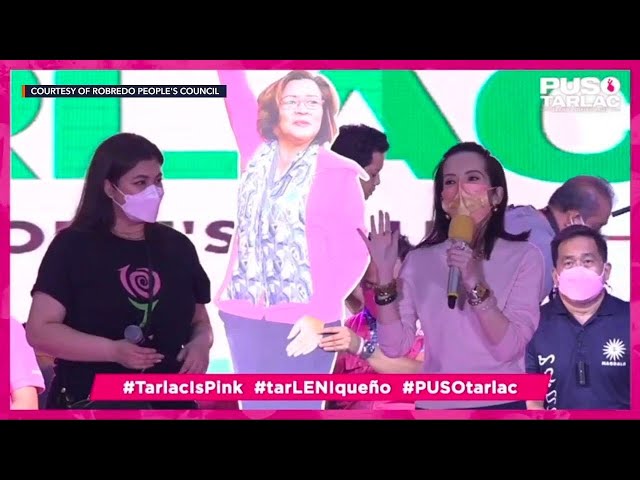 “Sa ‘yo ko nakikita ang pananaw, iisa ang vision…. In other words, sinabi ni Noy na sa ‘yo ko nakikita ang sincerity at ang ability na unahin ang iba bago ang sarili (It is in you that I see that we share a vision…. In other words, Noy said he saw sincerity in you and the ability to prioritize others over yourself),” Kris said.

Aside from Kris, Angel Locsin, the aunt of senatorial candidate Neri Colmenares, also came up on stage to show support for Robredo. According to a December 2021 Pulse Asia Research, Incorporated survey the two actresses are among the top celebrities that can convince people who to vote for.