Facebook Twitter Copy URL
Copied
The picturesque 304-hectare lake is perched atop Mount Melibengoy, about 1,280 meters above sea level. It is a favorite spot among nature lovers

GENERAL SANTOS, Philippines – The local government of T’boli, South Cotabato placed one of the province’s major eco-tourism destinations off-limits to the public for two months to give it a breather.

T’boli Mayor Keo Dayle Tuan said the move to keep Lake Holon area off-limits for at least 60 days would allow the rehabilitation of the place frequented by many tourists and trekkers via the Salacafe and Kule trails.

Tuan said the local government would also repair public facilities, do maintenance work on the two trails, and plant trees around the lake.

The popular nature destination was temporarily closed to the public on Saturday, January 7.

The picturesque 304-hectare lake in T’boli town is perched atop Mount Melibengoy, about 1,280 meters above sea level. It is a favorite spot among local and foreign nature lovers.

Described by many as a mystifying and enchanting place, the crown-shaped lake is said to have been formed after the January 4, 1641 eruption of the now dormant stratovolcano.

The lake used to be known as Maugan, and the volcano Parker, the names of two American pilots whose plane crashed in the area during World War II.

The local government later changed the lake’s name to Holon – “portal to heaven” in the T’boli dialect – and renamed the volcano Melibengoy.

The place, along with the 15 other mountains surrounding it, is considered sacred ground by the T’boli tribe.

The town’s tourism office said they will also use the two-month lull to further train tourism workers and other stakeholders, and enhance their knowledge about the eco-tourism destination as well as in taking care of the lake and its environment.

Officials said the known hospitality of tribal folks living along the trails who share tales and myths about the place has been an attraction by itself.

Milchard Bing of the T’boli municipal information office said Lake Holon will be opened to the public again in time for the revelry during the 2023 Seslong Festival of the town. – Rappler.com 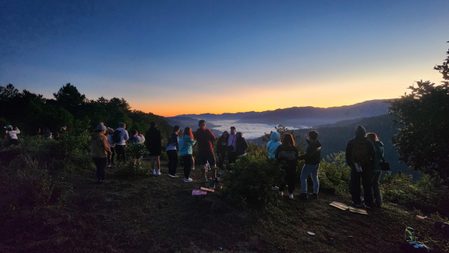