MANILA, Philippines – President Ferdinand Marcos Jr. has achieved one thing that no other top Philippine leader has managed to do since the 1986 bloodless revolution that ousted his dictator father: cement the so-called “supermajority” blocs in both houses of Congress.

That the House of Representatives is dominated by Marcos allies is nothing new in the peculiar world of Philippine politics, where personalities trump principles and where politicians tend to ally with whoever is sitting in Malacañang. But what’s unique about the 19th Congress is the formation of the “supermajority” even in the Senate – the chamber that often prides itself as being the more independent house.

Marcos now has a Congress fully at his disposal, with close allies helming both chambers. Critics have raised the alarm over what would appear to be the inability of such a legislative body to stand up to the President when it comes to his marching orders. Will a traditional politician hoping to secure a budget for his district say no to a president voted by 31 million Filipinos?

No less than Marcos’ own first-degree cousin, Leyte 1st District Representative Martin Romualdez, is the House Speaker. Members of the Marcos-Romualdez clan have already been gifted with plum posts in the chamber.

The House minority bloc led by 4Ps Representative Marcelino “Nonoy” Libanan has been criticized by staunch opposition legislator and Albay 1st District Representative Edcel Lagman to have been “co-opted” by the supermajority. The freshly minted Minority Leader took his oath before the Speaker, an unusual act even in the House.

Brosas, Castro, and Manuel are also part of the progressive Makabayan bloc, which is usually critical of the administration’s policies.

In the upper chamber, Marcos ally Juan Miguel Zubiri is the Senate President, managing to secure the alliance of 19 other senators from several political parties.

The four senators who have refused to join the supermajority are even further divided: Senate Minority Leader Aquilino “Koko” Pimentel III and Senator Risa Hontiveros in the minority, and the siblings Pia and Alan Peter Cayetano as independents.

This is a consequence of a political system that gives almost “absolute power” to a president, argued former Ateneo School of Government dean and law professor Tony La Viña.

“Even if the 1987 Constitution was supposed to stop this by separation of powers, they designed a powerful president. If you look at the debate in the 1987 Constitution, this was exactly what people were warning about, those who wanted a parliamentary system – that we were restoring an imperial presidency,” La Viña told Rappler.

“So even when we had Congress already under Manuel Quezon, Quezon could exercise absolute power. All other presidents did that and it just got worse through the years,” he said.

In recent history, past presidents like Gloria Macapagal-Arroyo and the late Benigno “Noynoy” Aquino III also packed Congress with allies who moved in their favor several times. The foul-mouthed Rodrigo Duterte then took it a notch higher, using his sheer popularity and influence to weaponize Congress against his critics. With the supermajority blocs in the Senate and the House in place, Marcos has secured control of Congress. When his father, the late strongman Ferdinand Marcos, declared Martial Law, the patriarch seized control of Congress and padlocked its doors in 1973. Forty-nine years later, the son walks freely into the hallowed halls of the Batasang Pambansa, with legislators welcoming him with open arms.

Legislators with familial ties to the President have been given some of the most coveted posts in the House.

Though a neophyte in politics, presidential son Sandro Marcos of Ilocos Norte’s 1st District has been made Senior Deputy Majority Leader. This makes him an ex-officio member of all House committees, where he can cast his vote on all bills and measures. He is also now chairman of the powerful rules committee, which decides on all rules governing all proceedings in the House.

But if word from the grapevine is to be believed, becoming Senior Deputy Majority Leader may even just be a compromise for Sandro Marcos. The son of the President was reportedly eyeing the chairmanship of the House committee on appropriations, tasked to oversee the scrutiny of, and negotiations on, the proposed national budget.

Another Marcos relative, Tingog Representative Yedda Romualdez, wife of the Speaker, is once again the chair of the accounts committee. It’s the committee that oversees the chamber’s internal budget.

Former president and now Pampanga 2nd District Representative Arroyo, whom Speaker Romualdez considers his mentor, has been named Senior Deputy Speaker. She is president emeritus of Lakas-CMD, where the Speaker is president and Vice President Sara Duterte is co-chairperson. It is Lakas-CMD, and not Marcos’ Partido Federal ng Pilipinas, that comprises the majority in the House.

Speaker Romualdez, however, promised to be a fair leader to the 310 other members of the House.

“As your Speaker, I vow to attend to all the concerns of your constituents. I shall try to be as fair as possible and favor no one. There will be fair and equitable distribution of resources for development of our regions, regardless of political affiliation,” said Romualdez in his acceptance speech on July 25.

He asked for unity in the House, echoing Marcos’ own messaging on the presidential campaign trail.

“We are confident that with the unity that our President has espoused, we can actually overcome the crippling effects of this pandemic, political differences, or the impacts of the Ukrainian war,” said Romualdez. “With unity of purpose, there is nothing that we cannot do.”

The formation of the Senate “supermajority” in the 19th Congress was already in the works a mere days after Marcos won the presidency by a landslide. Zubiri said as much to reporters on May 18, just before the winning senators of the 2022 polls were proclaimed by the Commission on Elections.

The “supermajority” push seems to be the inevitable for the upper house, as Marcos’ predecessor Duterte stepped down from office with 17 out of the 23 senators allied with him. Even then, the Senate already had a “supermajority” without the name.

The Marcos-allied bloc became a reality after Zubiri’s group and the so-called “Mama Bear’s bloc” led by billionaire senator Cynthia Villar agreed that, regardless of who wins the Senate presidency, both of their groups must merge. Most of the senators from both blocs, after all, are allied with the ruling coalition that emerged after Marcos and Sara Duterte secured their victories in the 2022 elections.

Villar would eventually give up on her bid for the Senate presidency, supporting Zubiri instead. In turn, Zubiri promised to look out for Villar’s allies by doing his best to accommodate their requests to get key leadership posts in the Senate. Cynthia’s son, Mark Villar, is a first-time senator.

Those closest to Zubiri, of course, expectedly got first dibs on the most coveted positions. Joel Villanueva is the Majority Leader, Nancy Binay is accounts committee chairperson, and JV Ejercito gets the local government panel. Sonny Angara retains chairmanship of the finance committee, while Win Gatchalian remains ways and means chairman.

Loren Legarda, who is now the most senior member of the chamber with 18 years under her belt, was made the Senate President Pro-Tempore.

In his first speech as Senate President on July 25, Zubiri gave the public a glimpse of how he wanted the chamber to run in the next three years under the 19th Congress: vigilant against laws that could potentially harm the people, but cooperative with the President’s legislative agenda.

Expect the Senate to still exercise its oversight powers, said Zubiri, but they would not be doing it to “encroach on the executive branch.” 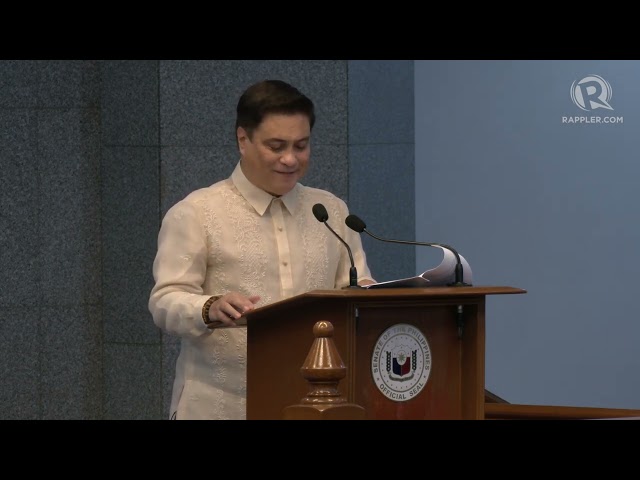 “This Senate, under my leadership, however, will be one to solve problems more than it would find faults. While probes are magnets for publicity, it is the policies – laws patiently written line by line away from the limelight – that drive progress,” said Zubiri.

Even with the “supermajority,” however, the Senate would not necessarily be as susceptible to presidential control. Unlike district and party-list representatives who have smaller constituencies, senators were elected by a nationwide constituency and therefore have a national mandate, just like the President. The chamber is composed of 24 different republics, as the political lingo goes.

Only time can tell, however, just how independent they are going to be.

When Marcos delivered his first State of the Nation Address, senators and representatives gave him two standing ovations. They scrambled to kiss his hand and to take selfies with him. They chased him around the Batasang Pambansa as he walked out of the plenary hall. These same legislators insist on their being independent despite openly calling themselves allies of the widely-popular Marcos.

Words come cheap, but actions speak the loudest of them all.