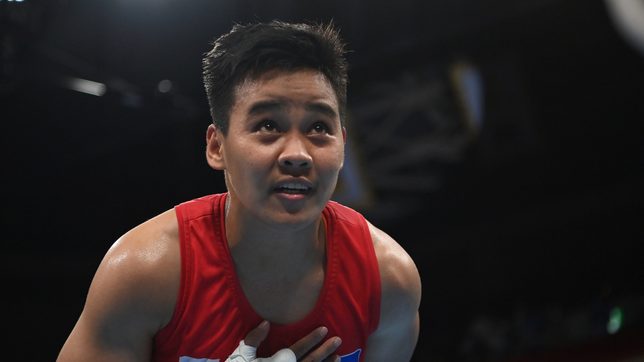 OLYMPIC DREAMS. Nesthy Petecio seeks to add a gold to her Olympic medal haul that already consists of a silver.

Facebook Twitter Copy URL
Copied
A major motivation for Nesthy Petecio is her desire to follow in the footsteps of weightlifter Hidilyn Diaz, the Philippines first-ever Olympic gold medalist

The Paris Olympics may be three years away, but boxer Nesthy Petecio already has her eyes on the gold.

Petecio delivered a strong message after falling short of the gold in the Tokyo Games following a unanimous decision loss to Sena Irie of Japan in the women’s featherweight finals.

(I only have one thing to say: I won’t stop until I win the gold.)

A major motivation for Petecio is her desire to follow in the footsteps of weightlifter Hidilyn Diaz, who ended the Philippines’ near century-long quest for an Olympic gold.

Just like Diaz, who first won a silver in the 2016 Rio de Janeiro Games before her breakthrough in Tokyo, Petecio intends to capture the elusive boxing gold in the next Olympics.

Diaz, who joined the same forum, encouraged Petecio to fulfill her mission.

“Sige lang. Walang competition. We have to motivate each other,” Diaz said.

(Go for it. We’re not in competition with each other. We have to motivate each other.)

Fellow boxers Carlo Paalam and Eumir Marcial are also keen on representing the country again in Paris after taking home medals from their first Olympics.

Marcial, who clinched bronze in the men’s middleweight division, said he still aims to turn his childhood dream of winning an Olympic gold into reality even as he resumes his professional career.

(Ate Hidi won a silver and then she trained harder and won a gold. We seek to be like her.)

(We’ll work harder in training. It will always be in our hearts that we want to capture the gold.)

Paalam has the same mentality after settling for silver in the men’s flyweight class following a split decision loss to Galal Yafai of Great Britain.

(I wish that we’ll still be strong by that time and we’ll work hard in training until we get what all athletes aspire for, a medal.) – Rappler.com