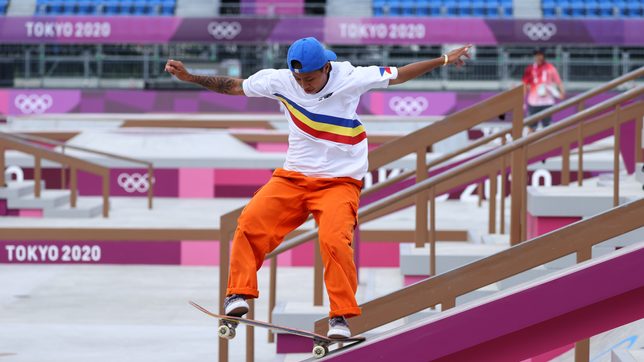 TRICK MASTER. Margielyn Didal makes the most out of the tricks section of the competition.

Margielyn Didal made it to the women’s street finals in skateboarding’s Olympic debut in the Tokyo 2020 Games on Monday, July 26, at the Ariake Urban Sports Park.

Didal recorded a final score of 12.02 that placed her at seventh in the elimination-round rankings, where only the top eight skaters advanced to the finals on the same day at 11:25 am, Philippine time

The 22-year-old Filipina entered the competition ranked world No. 17 and performed in heat 2 together with Japan’s top skateboarder and world No. 3 Aori Nishimura.

The world No. 1 street skater Pamela Rosa of Brazil suffered a huge upset as she was knocked out of the final eight after the stunning performances of the heat 4 skaters.

Thirteen-year-old Rayssa Leal is the only Brazilian who made it to the final, topping veterans Rosa and world No. 4 Leticia Bufoni.

After opening her campaign with a 1.71 in the first 45-second run, the pride of Cebu bounced back with a 2.77 in her second run.

The 2018 Asian Games gold medalist had a clear advantage in the tricks section, immediately scoring a 3.01 in the first as she initially crashed into the top three overall.

After failing to land her second trick, Didal garnered cheers and applauses after she executed the third on the shogun rail to claim the top spot in the heat.

Despite going against Netherlands’ Roos Zwetsloot, who eventually ruled after heat 2 with a 13.48 score, Didal remained unfazed.

After her failed back foot for heel flip attempt in the fourth trick, Didal landed a 50-50 with a trey flip in her last trick that recorded her the highest score of 3.22.

Since only four scores of the total seven attempts would be counted, only Didal’s scores in the second run, first, third and fifth tricks were totaled.

Meanwhile, Japan’s Aori Nishimura staged a comeback in the 20-skater field after failing in her first three tricks to overtake Didal for the second spot after heat 2 with a score of 12.82. – Rappler.com