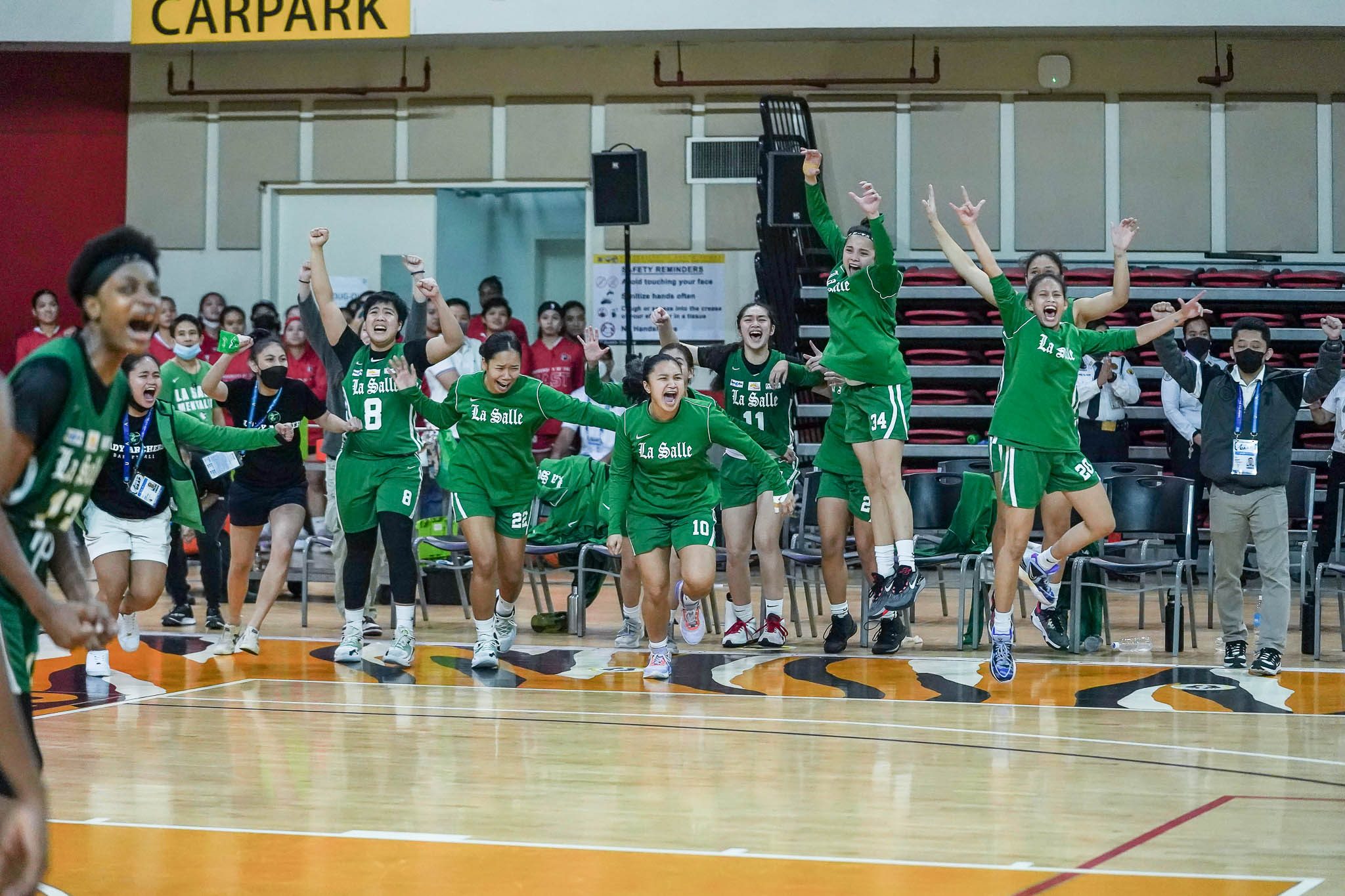 PANDEMONIUM. The La Salle Lady Archers rush to the court after a historic win over the NU Lady Bulldogs that snapped a 108-game winning streak

Facebook Twitter Copy URL
Copied
For the first time since the UAAP Season 76 finals, the NU Lady Bulldogs snap their mythical 108-game winning streak, once again at the hands of the La Salle Lady Archers

MANILA, Philippines – The La Salle Lady Archers completed one of the biggest shockers in UAAP history after ending the 108-game winning streak of the NU Lady Bulldogs with a 61-57 overtime escape at the UST Quadricentennial Pavilion on Wednesday, November 23.

The La Salle program came full circle with the win as it marked the first time the NU women’s basketball dynasty dropped a game since the title-clinching Season 76 finals Game 3, which was also won by the Lady Archers, 69-61, way back in October 5, 2013.

Since then, the Lady Bulldogs have cruised to six straight titles, rarely receiving any credible threats throughout their mythical streak that long surpassed the Adamson women’s softball team’s mark of 73 straight.

Fina Tchuido led the Lady Archers’ biggest win to date with 14 points and 19 rebounds in a 41-minute marathon, while Charmaine Torres scattered 13 points, 6 boards, and 5 assists in also 41 minutes.

Lee Sario and Bettina Binaohan scored 10 apiece to help La Salle rise to an 11-2 record, while NU fell to a 12-1 slate.

Coming off a 49-all tie at the end of regulation, the Lady Archers created a crucial 5-point separation, 57-52, off two clutch Torres free throws, capping an 8-2 overtime start.

Although Camille Clarin immediately answered with a triple to get within 55-57, Binaohan answered right back with a layup for the 59-55 lead, followed by two Sario charities for a 61-55 gap with 43 ticks left.

Edimo Tiky only managed to sink one last bucket for NU before pandemonium ensued as giant-slaying La Salle held on for the historic victory.

“My girls just wanted it more. They get all the credit today. They were the ones making the right decisions on defense and offense. They just didn’t want to let that ball go from their hands, every time on every possession,” said La Salle head coach Cholo Villanueva.

“Every time they shoot their shot, they shoot it with confidence, so all the credit goes to my girls for a one heck of a game.”

Top stars Kristine Cayabyab and Clarin only scored 7 apiece, combining for a frigid 5-of-23 clip for NU.

La Salle aims to extend its seven-game winning streak – now the league’s new longest run – with a twice-to-beat-clinching win against UE on Saturday, November 26, while NU looks to bounce back and vent its ire against Adamson that same day, still at the UST QPav.