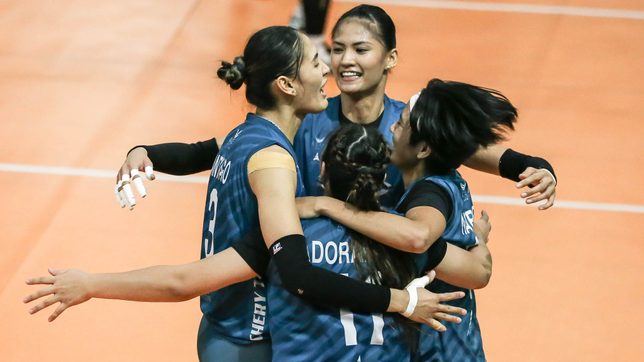 Chery Tiggo kept its hold of fourth place in the standings with a 4-2 record, while Creamline tumbled down to a 5-1 slate with its first loss since the end of the 2019 Reinforced Conference Finals on July 14, 2019.

The game, and ultimately the Cool Smashers’ streak, looked all but over halfway through the third set, as the Crossovers rode a long wave of momentum en route to a 13-5 lead.

But, the heart of a champion manifested with the Creamline stars as they outscored Chery Tiggo, 20-10, to force a fourth frame by the skin of their teeth.

However, the Crossovers were just not meant to be denied this day as back-to-back Maika Ortiz blocks powered a key run that got them up, 22-15, in the fourth set.

Tots Carlos’ small offensive eruption came just a little bit too late, as the Crossovers closed out the champs for good in history-making fashion.

All the glitz that naturally came with this kind of streak-busting win, however, did not distract head coach Aaron Velez from the ultimate goal.

Chery Tiggo will have one day off to cleanse away the week’s high-stress events as it next faces fellow powerhouse squad Petro Gazz Angels on Sunday, August 1, at 1 pm.

Creamline, meanwhile, will have a chance to vent its ire and get back on the win column with a game against the free-falling Cignal HD Spikers on Tuesday, August 3, after what will look to be a torturous three-day wait. – Rappler.com