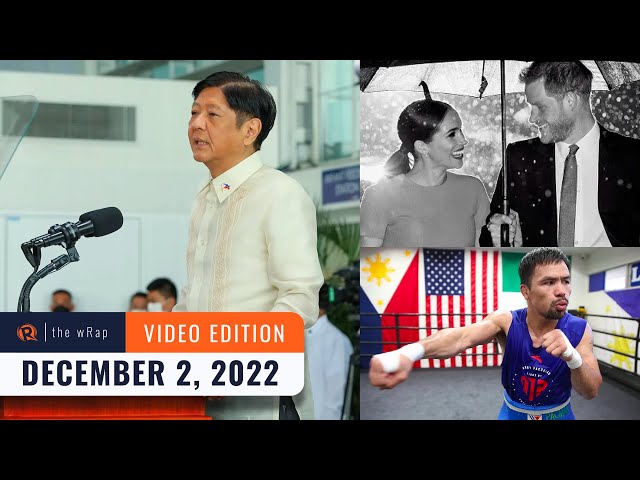 The House committee on banks and financial intermediaries approves a bill for the ‘Maharlika Wealth Fund.’ It also sets the Philippine president as chair of the government corporation that would manage the proposed sovereign wealth fund.

The Sandiganbayan, the country’s anti-graft court, declares in a resolution government prosecutors are able to present enough evidence proving plunder and corruption charges against Janet Napoles.

The EDSA Carousel Libreng Sakay program now runs for 24 hours a day until December 31. The decision follows the expected increase in commuters due to extended mall hours this Christmas season.

All international travelers bound for the Philippines must provide arrival and health information through a new website starting Friday, December 2. The new platform can be accessed through etravel.gov.ph.

Duwa Lashi La, the head of a parallel civilian government in Myanmar, says at least 2,000 pro-democracy fighters have been killed battling the military junta. He also urges allies to provide military aid.

Netflix releases the trailer for a documentary series on Britain’s Prince Harry and his wife Meghan. The first clip from the much-awaited documentary features never before seen pictures of the royal couple.

Renowned Filipino boxer Manny Pacquiao denies cheating his way to a win over Nedal Hussein in their 2000 encounter. This, after renowned Filipino referee Carlos Padilla claimed he rigged the fight in favor of his compatriot. – Rappler.com