[New School] Marcos, Duterte, and an uphill battle for progressives this 2022 Facebook Twitter Copy URL
Copied
'Nevertheless, progressives cannot afford to be complacent. It was complacency that led to Otso Diretso’s fate in the 2019 elections.'

The past few days have proved an emotional and political rollercoaster for pro-administration and opposition forces alike. Davao City Mayor Sara Duterte-Carpio announced her vice presidential bid – and was soon adopted by Bongbong Marcos as his running mate – following a very public appearance together in Cavite at the wedding of Lakas-CMD Chairman Bong Revilla’s daughter.

The candidacy comes in the wake of Duterte’s withdrawal from reelection in Davao, and her resignation from the party she founded in 2018, Hugpong ng Pagbabago (HNP). Then, in a baffling turn of events, President Rodrigo Duterte announced his own candidacy following months of speculation,  stating his intentions to run against his daughter as Senator Bong Go’s vice president – and then backtracking by instead running for a seat in the Senate.

Discord in the administration’s ranks, coupled with the lack of an anointed successor to the Duterte legacy, would be nothing if not a boon for the campaigns of Vice President Leni Robredo and Manila Mayor Isko Moreno. But while driving a wedge between their opponents is likely to divide votes  and rustle a few feathers, progressives should take care to understand the implications of a Marcos-Duterte tandem moving forward.

While plans for a united opposition have been in the works since the beginning of 2021, the need for it has never been greater. Alone, neither Isko nor Leni, nor, for that matter, Manny Pacquiao possess enough political support to combat a steady alliance between the Marcos North  and Duterte South.

If the Revilla wedding is any indicator, certain elites in the country are working to overturn the status quo in their favor by securing a Marcos-Duterte administration this 2022. Party switching is endemic to Philippine politics, and Sara’s defection to Lakas-CMD grants her access to a wider pool of party resources demanded by a national campaign, which were simply  unavailable to a regional party such as the HNP. Her subsequent adoption by Bongbong Marcos and the Partido Federal ng Pilipinas (PFP) as his running mate effectively wedded the Marcos and Duterte names together, establishing a brand that appeals to a much broader spectrum of the  Philippine electorate, which they could not have otherwise accomplished in isolation. 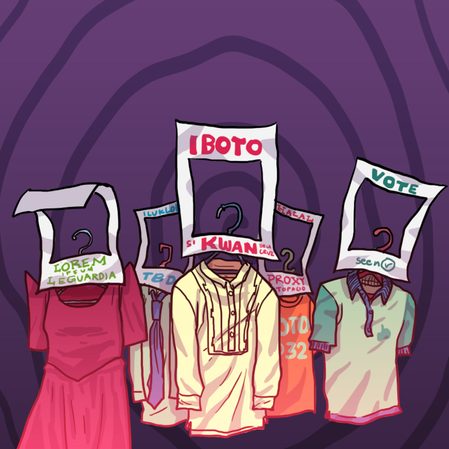 If there is a lesson progressives should learn here, it is not to take the necessity of a Marcos-Duterte union as a positive development on their end, as a sign of fear or weakness, but rather as a major oversight on the part of the opposition strategy – one that the Marcos camp saw fit to exploit.

Vice presidentiables Doc Willie Ong and Senator Kiko Pangilinan are undoubtedly the weakest links of their respective candidates. Sara Duterte lends much to Marcos’ political machinery, securing difficult votes in Mindanao where Bongbong lagged behind Robredo and Alan Peter Cayetano in 2016. In contrast, Ong has little experience in the world of politics; and with public confidence in the Liberal Party thoroughly eroded in the years following the end of the Aquino administration, even an old guardsman like Pangilinan might not be enough to secure the Robredo camp her much-needed votes. Pangilinan himself has stated that he is open to substitution if it means advancing Robredo’s cause, with meetings between the Robredo and Pacquiao camps spurring rumors regarding a possible alliance sometime in the near future.

As it stands, however, neither Ong nor Pangilinan possess a strong enough voter base to positively contribute to a presidential victory. It does not help that Moreno’s recent pronouncements on the campaign trail may well have alienated some of his more progressive voters that were otherwise torn between him and Robredo. And while Robredo herself continues to enjoy popular support from the electorate, her failure to secure the unanimous support of the Philippine Left and the likes of fellow candidates Ka Leody de Guzman and Walden Bello – all of whom represent genuine grievances on behalf of the country’s workers and marginalized sectors – may just prove the difference between victory and defeat in the upcoming elections.

On the other side of the fence, PDP-Laban’s decision to field President Duterte under Go’s senatorial slate is nothing if not a last-ditch effort at using the Duterte name to maintain some semblance of influence after their members inevitably jump ship to the new ruling party come 2022. What the party leadership fails to understand is that it is exactly this desperation for  power that is likely to cost them the next election. Infighting between factions led by Energy Secretary Alfonso Cusi on one hand, and Senator Manny Pacquiao on the other, has effectively undermined party cohesion, ceding the initiative for opposition members and the Marcos camp to  rapidly gain ground against the party’s hopefuls.

Go himself was reported to be devastated upon learning of Sara Duterte’s candidacy, and later on replaced Bato as PDP-Laban’s presidential candidate at the urging of the elder Duterte. The party had unsuccessfully offered terms to support Sara’s bid for the presidency earlier in the year.

What Lakas-CMD had that PDP-Laban did not is anyone’s guess. Maybe it was more favorable terms, fewer strings attached. Maybe it was the leeway  to decide between president and vice president (Lakas-CMD had only fielded placeholder candidates prior). Or maybe it was the support and guidance of the party’s leadership (House Majority Leader and Marcos’ cousin Martin Romualdez serves as party president, while former  presidents Gloria Macapagal-Arroyo and Fidel V. Ramos serve as president and chairman emeritus, respectively).

Whatever the case, it would not be outrageous to think that the factional politics of  PDP-Laban is what ultimately drove Sara to the arms of a rival party. Judging by former LGen. (and now presidential candidate) Antonio Parlade Jr.’s recent statements regarding Go and his handlers, this certainly seems plausible. Sara Duterte is many things, but a pawn in her father and  his friends’ games she is not.

In light of these developments, the future of the country looks bleak. Fortunately, this early on in the campaign trail (which only officially begins in February), nothing is set in stone. If there is anything to be said about Philippine politics, it is that it is always full of surprises.

Nevertheless, progressives cannot afford to be complacent. It was complacency that led to Otso Diretso’s fate in the 2019 elections. Our liberal echo chambers may be deafening, but the reality of the polls and  the situation on the ground tell a vastly different story. Remember, it is not progressives that need convincing. The Marcos-Duterte tandem is formidable, not invincible. The challenge now is in uniting the disparate elements of the fragmented opposition in order to present a united front  against this unholy alliance of the enemies of democracy. The country does not need a saint. And the sooner we realize that, the sooner we can turn our attention to the devil. – Rappler.com