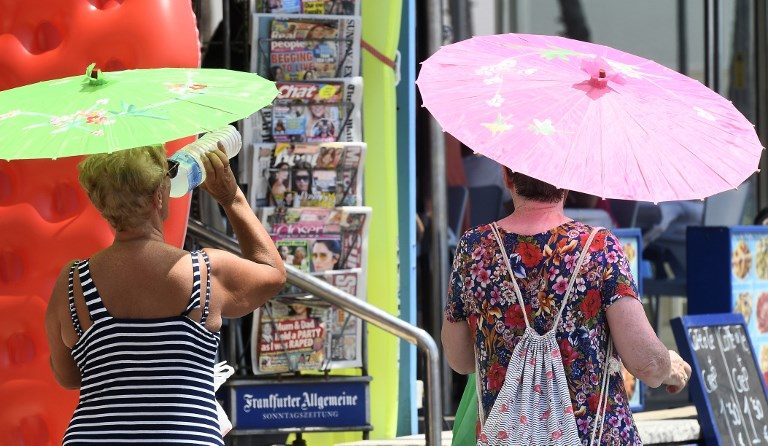 The following is the 38th in a series of excerpts from Kelvin Rodolfo’s ongoing book project “Tilting at the Monster of Morong: Forays Against the Bataan Nuclear Power Plant and Global Nuclear Energy.“

In our times, humanity faces two great threats:  nuclear war and climate change.  What’s keeping us from nuclear war is “Mutual Assured Destruction” – everyone knows that it would have no winners. We may still all be victims of an insane, empowered despot, of course, and in 2022, there’s reason for worry.

Climate change from global warming, on the other hand, is very real, and continues to worsen. Fossil-fuel industries, also the nuclear lobby that falsely claims it makes no CO2, are to blame.  People need to understand climate change properly, hence this Foray and the next.

First, we look at how sunlight interacts with the Earth and atmosphere. We will see how the Sun-warmed Earth radiates its heat. Foray 39 then deals with the Greenhouse Effect, a much-misunderstood idea. Then we will look at how the global warming crisis came to be.

Visible light is the most familiar part of the electromagnetic spectrum, the part our eyes use. But as the diagram below shows, visible light is only a very tiny part of the spectrum.  There is nothing special about it, only that it is what human eyes can capture.  Many animals can see ultraviolet.  Bees and butterflies are guided to nectar in flowers with ultraviolet markings; scorpions have similar markings to warn away predators that see ultraviolet; some fish see prey that are colored ultraviolet.  Some birds know which of their chicks are weaker and need more food because their ultraviolet markings are different from those of the healthy ones. And reindeer find lichen to eat by their ultraviolet colors.

So let this serve as a philosophical reminder that your reality is a collaboration between the forces of Nature and the sensory organs that evolution has provided you with which to sense them.

This drawing of the waves only shows that they get longer from gamma rays to radio waves.  It is impossible to draw this accurately, “to scale,” because AM radio waves are about a quadrillion times longer than gamma rays. Each tick mark from left to right from 0.0001 nm to 100 meters is a hundred times longer!

As the diagram shows, the shorter the wavelength of radiated energy, the more energetic it is. The temperature of a body of material determines the lengths of the electromagnetic waves that it radiates: the hotter, the shorter and more energetic.  Let’s illustrate this with a common example: an iron bar being heated:

The hottest part of the bar glows yellow, which fades to orange, then to red with increasing distance from the flame.  Even farther away, the bar looks black but radiates infrared, which can’t be seen, but your skin senses as radiant heat.

Thousands of times hotter than our iron bar, the Sun’s most abundant radiation is visible light, 39%. Its shortest and most energetic 8% are X- and ultraviolet rays, and more than half of its radiation is infrared.

Only about 48% of all incoming solar energy reaches and is absorbed by Earth’s surface. About 29% is not involved in earthly processes because it is immediately reflected back out to space by cloud tops, the atmosphere and Earth’s surface.  Atmospheric gases absorb another 23%, including all of the most energetic, the  X-rays, and the shortest ultraviolet waves.  That is a good thing.

Incoming solar X-rays are used up in the upper atmosphere where they encounter oxygen and nitrogen molecules.  These gases are each made of two atoms that stick together by sharing electrons.  The X-rays rip them apart into ions and also release free electrons. (We discuss ions in Foray 21.)

So the ionosphere is electrified. We transmit global shortwave radio waves by sending them skyward so they bounce off the ionosphere  back and forth down to Earth. More importantly, Earth’s surface would be uninhabitable if the deadly X-rays could reach it.

People commonly thank the ozone layer for protecting us from ultraviolet rays, but that is a little too simple.  Instead, thank the atmospheric oxygen for making ozone possible.  Don’t stop there; thank all the oceanic and land photosynthesizers that make the oxygen.

We live in the troposphere, the lowest 10 kilometers or so of the atmosphere.  Down here, ozone is a familiar industrial pollutant, a poisonous, pale blue gas that smells something like like garlic. You may have noticed it when an electrical appliance short-circuited, or while you watched an electric welder at work.  But high above us, ozone is a good thing.

Don’t regard the ozone layer as an object, a shield that passively protects us from the Sun’s ultraviolet rays.  What protects us are the processes that continually make and destroy ozone.

The Sun’s ultraviolet radiation is usefully subdivided into three parts by their wavelengths in nanometers, from the longest to the shortest: UVC from 100 to 280; UVB from 280 to 315, and UVA from 315-400.

As sunlight penetrates down into the atmosphere where oxygen is becoming abundant, about 35 kilometers (22 miles) above Earth’s surface, the shortest and most energetic UVC rays begin to rip oxygen molecules apart into two free oxygen atoms. Each then quickly combines with another oxygen molecule to form a triplet molecule of ozone, O3 in the ozonosphere or ozone layer  that extends down to 15 kilometer or 9 miles above Earth’s  surface.  Don’t think that the layer is all ozone; its highest concentrations are only about 15 parts per million.

Ironically, the UVB ultraviolet rays of medium length and energy are used up reversing the process,  tearing ozone molecules back apart into common O2 molecules and oxygen atoms that then join others to form O2. Only a small amount of UVB and most of the longest-wave UVA can reach the Earth’s surface, where they give us sunburn and skin cancer if we are not careful.

In the 1970s, “chlorofluorocarbon” gases were invented to use in refrigerators, air conditioners, and aerosol applicators such as spray deodorants.  At Earth’s surface, they are chemically harmless, but they slowly diffuse up into the ozone layer. There, sunlight breaks them down into ozone-destroying substances.  With less ozone to intercept UVB rays, more reaches Earth’s surface, increasing the risk of skin cancer. Chlorofluorocarbons were banned internationally in 1989.  That reduced the problem, but discarded refrigerators and Uranium-refining (Foray continue to leak chlorofluorocarbons into the environment and up to the ozone layer.

Our first look at The Greenhouse Effect

The term is based on the idea that the atmosphere acts like the glass of a greenhouse, allowing short-wave light waves to enter through it. Absorbed by the greenhouse walls and floor, this energy heats them up so they radiate too.  But they are much, much cooler than the Sun, so they radiate long-wave infrared rays, which cannot pass out through the greenhouse glass.

But that is too simple! The term “Greenhouse Effect” is a flawed analogy that we are stuck with because it is widely used. Nothing I say can make it go away, but Foray 39 will deal properly with it so we can then look at the global warming and climate change it is causing. – Rappler.com

[OPINION] The paradox of the faint young sun, the origin of life, and the modern cell

Why does love feel magical? It’s an evolutionary advantage

[OPINION] Paying respect to our own star