9 PH celebrity breakups: Where are they now? MANILA, Philippines – Breakups are hard, and that’s much more pronounced when you’re in the public eye.

Philippine showbiz has had its share of talked about breakups. Here are 9 ex-couples who made headlines when they split: They dated for 5 years. But in 2013, the showbiz world was surprised when their breakup was confirmed in 2013. In an interview on The Buzz in 2013, Billy said that he was lost and confused, and the breakup was his fault.

Now almost two years since the breakup, both have moved on with respective partners. Billy is dating Coleen Garcia, one of his co-hosts on It’s Showtime. Nikki meanwhile married BJ Albert last November at the Sta. Elena Golf Country Club in Laguna. (READ: How Nikki Gil met fiance BJ Albert) 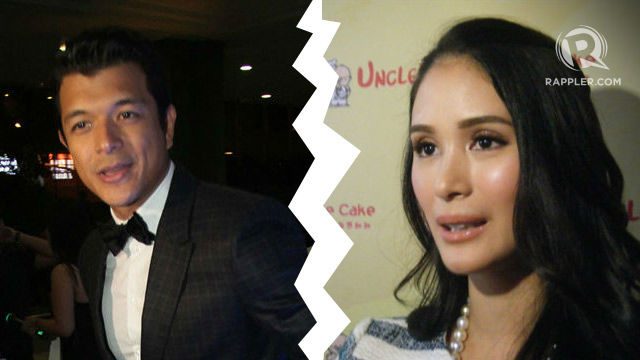 Jericho and Heart were paired up in the teleserye Panday. The two became a couple despite the disapproval of Heart’s parents. In a full interview on the May 2013 issue of Yes Magazine, published on the ABS-CBN website, Heart said she and Jericho separated because her parents, especially her mom made her believe that Jericho cheated on her.

“When they said that he was cheating on me with Carmen Soo (Jericho’s co-star in Kahit Isang Saglit), I really did think that he was. I really thought that he cheated on me. I really did. And that was because they told me that he was and I was convinced,” she said.

After their breakup, Jericho was linked to other personalities such as Cindy Kurleto and Cesca Litton. Heart meanwhile dated Brazilian-Japanese model Daniel Matsunaga. Angelica and Derek were together for 6 years before splitting in 2012. In an interview on the April 2013 issue of Starstudio, Angelica said that she and Derek called it quits after an argument on the phone.

Today, Angelica is happily committed to actor John Lloyd Cruz. In an interview on Gandang Gabi Vice,  Angelica shed some light on how she made her best friend John Prats comfortable with her relationship with John Lloyd, since Shaina Magdayao, John Prats’ ex-girlfriend used to date John Lloyd.

Derek meanwhile is reportedly seeing a non-showbiz girl whom he even took to Palawan during the Holy Week break. It was a secret relationship, so under wraps that communication between them was a matter of minutes and seconds at a time. In a full interview on the 2011 issue of Yes Magazine, Sarah shared how she and Rayver kept their relationship a secret from her parents Delfin and Divine Geronimo, who are known to be strict with her.

In the same issue of the magazine, Rayver also shared how he decided to stop pursuing the relationship with Sarah after it was becoming too hard for the two of them. After their breakup, Rayver started seeing Cristine Reyes, who at one point had a conflict with Sarah. Both Cristine and Sarah have since patched things up.

Fast forward to 2015, the three have moved on with their respective lives. Sarah is now happily in love with actor Matteo Guidicelli – they confirmed their relationship June 2014. Cristine meanwhile is now a mother to daughter Amarah with boyfriend Ali Khatibi. Rayver is single. Before John Lloyd and Shaina got together, John Lloyd dated actress Ruffa Gutierrez. The two ended their relationship in 2010. In a 2011 interview with TV 5’s Paparazzi, Ruffa said that she received angry text messages from what was supposed to be John Lloyd’s number. She later found out that it was Shaina who had been sending the text messages. According to Ruffa, John Lloyd apologized to her, but Ruffa said she was hurt when the two gave an interview to The Buzz  that no third party was involved and for Ruffa to stay away from them.

In 2012, John Lloyd and Shaina ended gtheir relationship. John Lloyd is now dating Angelica Panganiban. In an interview on Gandang Gabi Vice, Angelica said she might have caused the breakup between John Lloyd and Shaina. Shaina meanwhile remained single, but has been linked to Piolo Pascual and Sam Milby. (Star Magic Ball, showbiz couples: Exes under one roof) Tagged as Kimerald, Gerald Anderson and Kim Chiu’s love team began on Pinoy Big Brother Teen Edition in 2006. After Kim won the title and Gerald emerged 3rd runner-up, the two were paired in many of ABS-CBN’s teleseryes and movies.

In 2010, reports surfaced that Gerald and Kim’s relationship was on the rocks. In an interview on Biyaheng Retro on February 2014, Gerald said he was receiving threatening messages from fans over their breakup.

In 2013, a feud between Kim and friend Maja Salvador erupted after Gerald started courting Maja. Maja  and Gerald became a couple that year.

Kim and Maja reconciled in 2014. Kim is currently being linked to actor Xian Lim, her co-star in My Binondo Girl and Past Tense, among other projects.

Last April 14 at the press conference for his new show Nathaniel, Gerald confirmed that he and Maja decided to take a break from their relationship. He was the ultimate heartthrob, while she was the daughter of Megastar Sharon Cuneta. Piolo Pascual and KC Concepcion were indeed a good-looking couple. But everything changed in 2011.

In an interview on The Buzz, KC narrated how she and Piolo got together. KC even shared that Piolo courted her for two years back and forth when she was studying abroad.  When she was asked for the reason behind their breakup, KC said: “May mga hinahanap ako na basic lang na hahanapin ng isang babae sa isang boyfriend, sa isang lalaki. Ayoko na siguro pumunta sa details…kasi ayokong siraan siya.”

Her interview caused quite a stir on showbiz with many speculating about Piolo’s sexuality. In the E! TV special documentary aired last September 2014, Piolo said he still cared for KC, but wished she did not do interview on The Buzz.

“I still love her, you know, with all my heart, but it’s just something that she did that I wish she didn’t do,” he said.

Since the breakup Piolo remained single, while KC was linked to Paulo Avelino, who confirmed that they did become a couple – they’re no longer together, though.

Last September, KC confirmed that she and Piolo are now on good terms again by posting a photo of them on Twitter. The two were able finally talk with each other during a trip in London for ASAP 20‘s tour. Breaking up is painful enough, but ending it via text – ouch.

In an interview with the press last April 6 for her new show Showbiz Konek na Konek, Bianca King confirmed that actor Dennis Trillo ended their relationship through text.  She made this revelation after she was interviewed on TV 5 ’s Call Me Papa Jack.

When asked for reaction how she took it, Bianca admitted she was very hurt but was able to move on after.

“If you have been lucky enough to experience the gut-wrenching, ass-kicking heartbreak that the best narratives are made of, you, my friend, are a champion. They say that the best things come out of the sh*ttiest dump of a predicament life has curve-balled your way. Only you can make that statement true…but before that, wear your heartbreak proud,” she wrote in Meg magazine.

Last July 11, Bianca announced that she  broke up with Julio Villafuerte, her boyfriend of two years. Perhaps there is no one showbiz personality more controversial than Kris Aquino. Her past relationships with different men have been scrutinized and talked about on- and offline. The breakdown of her marriage to basketball star James Yap was no exemption.

In 2013, 3 years since their separation, Kris filed a temporary protection order against James, whom she accused of making sexual advances at her when he visited his son Bimby at Kris’ apartment. James denied the charges, and this resulted to a very public conflict between the two, with Kris at one point saying she would quit showbiz for the sake of her sons.

On March 2014, Kris and James reached a settlement on Bimby’s custody terms. The two have since repaired their friendship, with James attending Bimby’s party, and spending time with Bimby and Josh whenever he can.

James is now in a relationship with Italian Michela Cazzola, who has gotten close to Bimby. Kris meanwhile made headlines when she confirmed she was dating Quezon City Mayor Herbert Bautista last April 2014. However, it ended abruptly with Kris even saying on her blog that he proposed to her before their breakup. She’s now focusing on being a great mom to her sons.

Which celebrity breakup was the most memorable for you? Let us know in the comments below. – Rappler.com